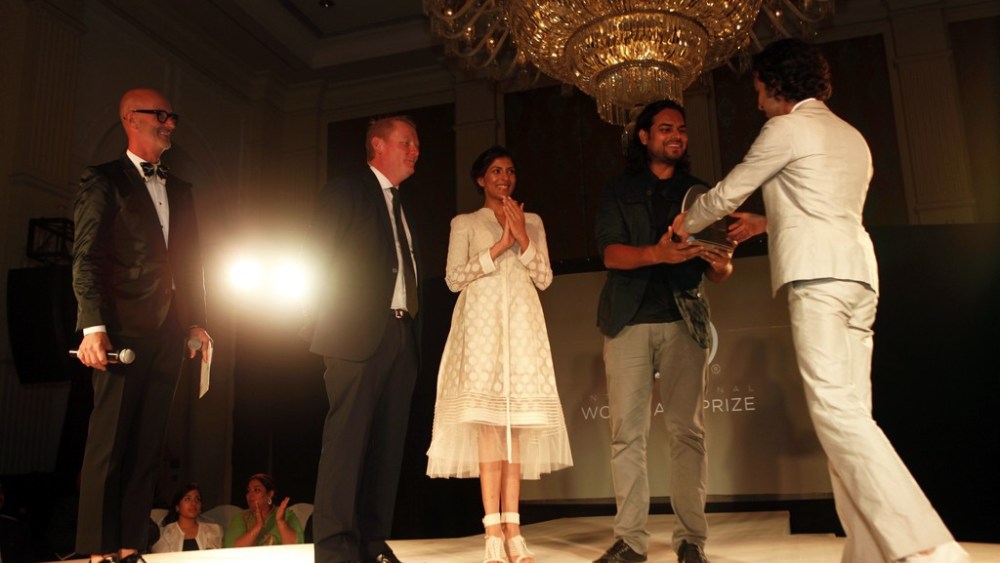 NEW DELHI — The Woolmark prize for the India and Middle East region has been won by Indian designer Rahul Mishra.

The award was made last week at the Leela hotel here. While last year’s award was solely for India, this year The Woolmark Co. expanded the region to include the Middle East. As a result, Mishra beat out designers not only from India but also from Pakistan, Lebanon and the United Arab Emirates.

Mishra won for his design in elegant cream with embroidery and hexagons, and, accepting the prize, said, “It’s an amazing feeling. I’ve worked towards this and it’s like a dream. It just came out good.”

Mishra, who was also in the shortlist in last year’s regional selection, is known for his research and attention to detail. His winning outfit, for example, was thought through to tell a story of metamorphosis using a Buddhist concept of lotus and hexagons with hand embroidery in merino wool yarn on a merino wool jacket dress. “I went through an extensive process to source the yarn,” he said.

“The deliberation was difficult,” Lock told WWD, “and we were going the whole day before being able to come to a decision.”

Mishra nearly won in the selection last year, Lock said, and had come back with an even greater focus this time. “He’s come up with a collection that’s very deserving. He’s used an incredible Indian heritage and technique with intricate hand embroidery and combined it with a modern silhouette,” said Lock.

Arora said the winner and the finalists were not about a region, but about the end product. “It’s also about a growing fashion sense in the entire region,” he said.

Sethi agreed. “It’s also a lot about learning from different cultures and gives a very healthy sense about the world of fashion,” he said.

But the event was also about those who didn’t win, and yet made it out of more challenging environments to this shortlist. Lara Khoury, a young designer from Lebanon, said that she wanted to infuse both the Lebanese culture and identity into her collection. “I didn’t win, but at least I got to be in competition with people like me, who are designers, and see that they are struggling too,” she said.

Feeha Jamshed, a designer from Pakistan, observed that the event gave her a sense of the similarity of the design aesthetic from across the region. “For the first time I felt alive as a designer,” she said.

Over the next six months, Mishra, like the other four designers chosen from different parts of the world, will be required to develop a capsule collection in merino wool, to be showcased in Milan, where the five finalists from across the globe will compete for the final international prize — an additional 100,000 Australian dollars, or $92,000, and the opportunity to be stocked in retailers including Harvey Nichols, Saks Fifth Avenue, 10 Corso Como, Joyce, David Jones and My Theresa.

The event in New Delhi completed the last leg of the International Woolmark Award selections of the finalists. The other winners from the different regions are Joseph Altuzarra from the U.S.; Sibling, a collaboration between Joe Bates, Sid Bryan and Cozette McCreery from Europe; ffiXXed from Asia, and Christopher Esber from Australia.