Ralph Lauren will open a store in São Paulo on Tuesday. Spanning more than 9,100 square feet of retail space, the store will feature Ralph Lauren’s women’s wear and men’s wear collections, along with accessories. 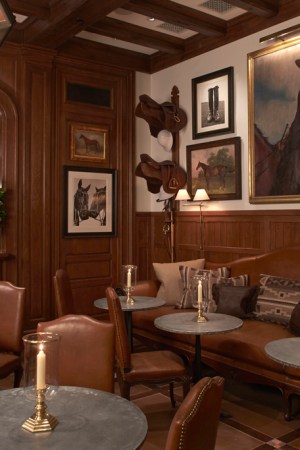 The company will open a store in São Paulo on Tuesday, on the ground floor of Cidade Jardim. Spanning more than 9,100 square feet of retail space, the store will feature Ralph Lauren’s women’s wear and men’s wear collections, along with accessories and leather goods, footwear and timepieces.

“I have long been fascinated by the Brazilian lifestyle and culture and believe our first store in São Paulo will fit well into a country that appreciates traditions of true quality and luxury,” said Ralph Lauren, chairman and chief executive officer of the company.

Upon entering the store is a foyer which leads to a room housing the Collection for women on the left and Purple Label for men on the right. An assortment of footwear, accessories and eyewear for both men and women is located within separate salons of these areas. There is also a watch salon for Ralph Lauren timepieces.

David Lauren, executive vice president of advertising, marketing and communications at Ralph Lauren, who is planning to attend the store opening, sees a lot of potential in the Brazilian market.

“Brazil and São Paulo present a huge opportunity for Ralph Lauren. We are not just opening a store, we are opening a market, and with roughly 70 percent of Brazilian luxury consumers living in São Paulo, it makes it the logical and most important place to start,” said Lauren. He said the company would like to expand outside of São Paulo, but there are no plans yet. While the brand doesn’t wholesale in Brazil, it has found that Brazilians are among its top customers globally.

“We know that the Ralph Lauren brand is important to the Brazilian consumer as we have seen that they are already buying our product in our stores across the globe. Brazilians are consistently in the top five of our worldwide customer base, and now we look forward to continuing to develop and expand these relationships in Brazil,” said Lauren.

To celebrate its entry into the market, the company has planned an event tonight at the store.

Lauren expects the store’s pricing to be competitive in the marketplace “but because the import duties are so high, any brand in the market has the same issue in that their pricing structure can be anywhere from a 40 percent increase and up.”

Although Brazil’s seasons are opposite from those in the U.S., Lauren said the store will sell on the North American schedule. “The climate in Brazil varies from the north to the south but for the most part sits in the tropical range. However, we have chosen to sell on the North American seasonality as we know that the Brazilian consumer is highly sophisticated and savvy when it comes to fashion. For this reason and for consistency in our key markets we are keen to ensure that the product (particularly high fashion) is as current as possible,” he said.

Lauren also said he understands that layaway purchasing is a common practice in Brazil and the store will be offering a quota program.

Robert Burke, founder and ceo of Robert Burke Associates, said, “Ralph has an international global strategy, and Brazil is a major market. Unfortunately the Brazilian market is one that fluctuates and was riding a very high wave, but is hitting some challenges because of the currency exchange. He did not have a presence in Brazil and needed to have one. It’s one of the major luxury markets in the world.

“The São Paulo customer has a very solid understanding of luxury and a high taste level and loves well-executed brands, and I’m sure it will be successful,” added Burke.

An emerging-market darling several years ago, Brazil’s economy has been hurt by economic stagnation and political turmoil. Brazil’s $1.7 trillion economy declined by 0.1 percent in 2014, according to Brazilian central bank data released last month, and it’s seen contracting by 0.5 percent in 2015. A corruption scandal at state-controlled Petrobras, the state-controlled petroleum giant, is expected to further hobble the country’s economy. Economists have cut forecasts for Brazil’s GDP this year, as Latin America’s largest economy struggles to get back on its feet.