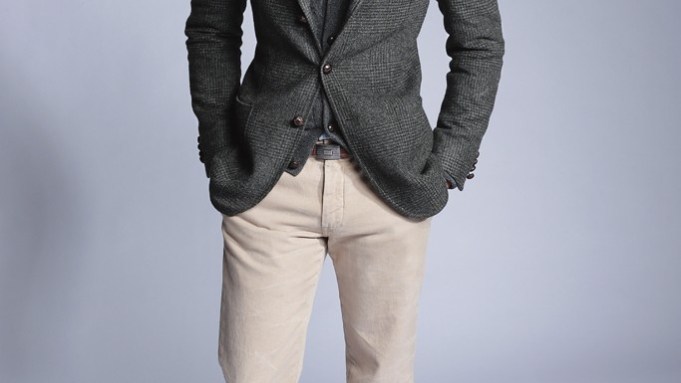 Ralph Lauren is mulling a return to the runways for his men’s wear collection.

Responding to reports that he is preparing to show in Paris this summer, the designer said: “I would love to show on the runway again. I’m thinking about it. I can’t say I’m committed to it, but it’s something that we thought about.

“It would be nice to set it [the collection] to music,” he continued. “The artistry [of a show] is fun.” But the dilemma is how to edit down the company’s enormous seasonal offering that spans several distinctly separate collections — Purple Label, Black Label, Polo, Double RL, Ralph Lauren Denim and RLX — and thousands of individual pieces.

“We would have to decide what to show,” Lauren said. “All of it? Purple Label, Black Label?”

The company last showed its men’s wear on the runway in New York in 2007 and before that in Milan in 2002, but since that time the collections have expanded dramatically. “We’ve grown so much, it would be hard,” he said. “We’d like to do it and we’re thinking of it, but it would be a matter of how to put it together.”

Although several men’s wear brands, including Rag & Bone, followed Lauren’s lead and showed their fall men’s wear this week before the official start of New York Fashion Week, Lauren is not convinced that a runway show for men’s in Manhattan is the way to go. “We’re a very international company now and our goal is to have more people around the world see the brand,” he said.

Until such time as he decides to stage a men’s runway show again, Lauren devoted a floor of his Madison Avenue offices to show his fall collection — and he’s in a tweedy mood.

In a presentation on Tuesday, the designer showed an assortment of tweed fabrics in each of his three cornerstone collections: Purple Label, Black Label and Polo. The offerings ranged from soft, washed variations to hearty, authentic Harris tweeds.

“Young guys are discovering Harris tweeds,” Lauren said. “We do well with tweed. We offer it not just because it’s selling, but because people want it. There’s an old-world purity, style and charm” to the fabric that is finding fans among today’s youth, and men are seeking it out.

Beyond tweeds, Lauren embraced a monochromatic color palette for his Purple and Black Label tailored pieces. “I’m tired of white and black,” he said. “It’s sexier when it’s monochromatic.”

He continued: “Simplicity comes from minimalism,” he said. “It’s low-key and quiet, but there’s a newness to it. It’s smooth and luxurious.”

In Purple Label, gray flannel was prevalent, and offered in a variety of subtle patterns. Pant legs were slim; dressy sweaters were offered in cashmere and lamb’s wool, and there was a selection of pieces made from suede and leather. “I like it when it has a richness,” Lauren said of the skins. There was also a three-piece suit on display, which had an “old-world elegance” made modern with lightweight fabrics. There was a selection of outerwear in navy, including a toggle coat. “Navies look new to me,” Lauren said.

In the Black Label collection, the suit offering was “sleek, modern and very simple,” he said, and also centered around gray this season. But the gray was broken up by a palette of solid, dark-colored ties and slacks in shades ranging from green and purple to brown. “The color highlights the grays and leathers and gives it flash,” he said.

In suits, peak and slim notch lapels were featured in single- and double-breasted styles, all with skinny pants. Tuxedos were offered in both shawl collars and peak lapels. Black Label sportswear offered an array of urban, sophisticated pieces such as a quilted sport coat, suede bomber jackets and shearlings.

The vast Polo collection included soft-shoulder clothing in tweeds and corduroys, complemented by a wide array of sportswear — everything from raglan sweaters to cargo pants. “It’s young, American roughwear,” Lauren said. Select pieces from the RLX performance line blended well into Polo, adding a jolt of bright colors and technical details that provided an overall feeling of modernity.

“Polo is growing around the world,” Lauren said, citing Sweden and Italy as two countries where the collection is popular. He said the line has an “Ernest Hemingway sensibility” that is popular with a wide range of men seeking “authentic, rugged heritage. It’s timeless. But men’s wear today is not simple. It has a lot of dimensions,” he noted.

One of those dimensions includes the performance-driven RLX collection, which Lauren said remains “very important to our brand. We have it in golf and tennis and skiing. It means utility and technical product with lightness and durability. It’s what young men want.”

For his Double RL collection, Lauren takes rugged vintage influences to new heights. The tweeds here could have been designed in the Thirties and will serve to fulfill the desire of men who shop vintage stores looking for “finds,” he believes. “They’re made to look like the originals.” The same could be said for the brand’s dress shirts, whose patterns were based on vintage styles from the company’s archives.

David Lauren, senior vice president of advertising, marketing and corporate communications, said the company recently set up a special site on ralphlauren.com for collectors of the company’s product. “People are hoarding, buying, selling and trading” vintage Ralph Lauren product, he said, noting that there was a gathering of collectors in New York recently and there’s a store in Japan dedicated to vintage pieces, which has no relation to the company. To fill the demand, the company has begun to sell some product from the Seventies. “It’s a testament to the timelessness of the product,” David Lauren said.

In Ralph Lauren Denim, the designer showed off his rugged side with waxed coatings and distressed finishes on jeans and jackets. Details were everywhere and included an array of zippers and an assortment of pocket treatments. This sensibility carried over to accessories as well, where Lauren showed motocross-inspired pieces that included studded and washed leather bags and hats. Other new accessories categories for the brand this season included a collection of rolling leather luggage pieces, slouchy suede totes and updated canvas bags. The offering in shoes ranged from sleek Black Label dress models to washed suede boots for Polo, many of which were made in America.

Turning to the whole Made in the USA issue, the vast majority of the company’s products are manufactured overseas, a situation Lauren admitted he would like to change. The designer was dragged into a public relations brouhaha during the London Olympics last summer when it was revealed that the Opening Ceremony outfits he provided to the American contingent were made in China.

“We’re competing with the best in the world,” he said, noting that the Purple Label collection is manufactured in Italy. “But we’re working with factories to do more things in America. We’re aware of the whole Made in America issue, but it’s expensive. We have developed a team of people around the world to look for the best products and the best value. American product is our heritage and we believe in it. It’s important to us and it’s an ongoing issue.”