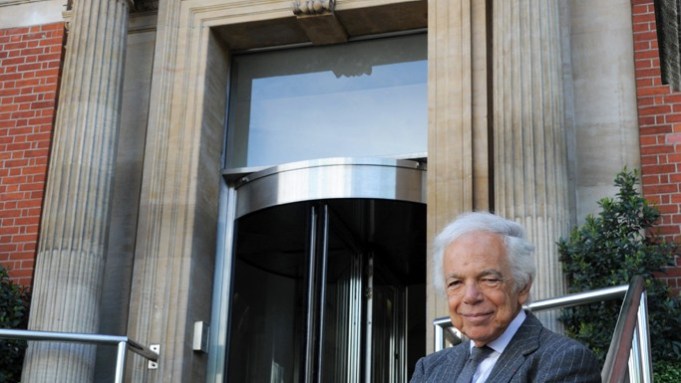 LONDON — Ralph Lauren is poised for a London encore.

The man who dresses the on-court staff at Wimbledon and whose stores large and small are spread across town has made a multimillion-dollar donation to the Royal Marsden Hospital, the biggest and most comprehensive cancer center in Europe.

The Ralph Lauren Centre for Breast Cancer Research is set to open next year in the hospital’s main branch on the Fulham Road in Chelsea, just down the street from two of the designer’s stores.

The new cancer-research center will span 6,383 square feet and take up an entire floor of the hospital. Its goal will be to help identify molecular differences between tumors in order to fine-tune and develop treatments, and to eliminate unnecessary and toxic therapies.

“England is very important for me, I’ve been here for years. It’s a place I love, so it was a natural thing. And the Royal Marsden is major,” Lauren told WWD following a tour of the hospital’s high-tech facilities, including a $10 million CyberKnife that delivers precision radiotherapy treatment.

Lauren, chairman and chief executive officer of Ralph Lauren Corp., said that for years he’s been connected to the Royal Marsden, which has been a beneficiary of his Pink Pony cancer fund.

Lauren has never been to Windsor Castle, nor has he ever met Prince William, but the event will have a particular resonance for him. “I knew [Princess] Diana. She presented me with an award in Washington for [my work with] breast cancer,” he said.

Although the Pink Pony Fund regularly partners internationally with major cancer organizations, the Royal Marsden donation is the designer’s first single, substantial cancer-related donation to an institution outside the U.S.

In 1990, Lauren helped establish a center for breast cancer research at Georgetown University Medical Center, named for his friend and former Washington Post fashion editor Nina Hyde. He later designed the first logo for Fashion Targets Breast Cancer, and in 2003 set up an outpatient facility for cancer care and prevention in Harlem, N.Y., together with Sloan-Kettering and North General Hospital.

Lauren said he recalls clearly his feelings when he was diagnosed years ago with a non-cancerous brain tumor.

“I didn’t have cancer, it was a benign tumor. I was very lucky.…It’s a very emotional thing to come out of an operation. So I’ve been through it…a little bit. I know what that feels like,” he said.

He said that right around that time, Hyde told him she had breast cancer, and he immediately wanted to help. With regard to the Marsden, he didn’t set any boundaries or make any requirements.

“This donation was for whatever they wanted to do, it was theirs. My donation is a very small thing; all these centers really need a lot of help,” said Lauren. “There seems to be a very good spirit about the hospital, and the people that run it are amazing.”

Earlier in the day, a number of the hospital’s professors and researchers briefed the designer, his wife and some of his staff on how the money would be spent.

Mitch Dowsett, a professor of biochemical endocrinology and head of the academic department of biochemistry at the Marsden, said the Ralph Lauren center would be built to accommodate “modern molecular research” with bespoke labs for measuring the DNA of tumors present in patients’ blood. Dowsett said he hoped the new center would help experts slash the time it takes to make diagnoses, and to evaluate whether there was any residual cancer lurking in patients who recently had tumors removed.

Cally Palmer, ceo of the Royal Marsden, said Lauren’s donation “has the potential to change clinical practice, and contribute significantly to the international knowledge basis.”

This may not be the last of Lauren’s singular donations to cancer research institutions outside the U.S.

“The question is, do you stay with a few [charity projects] and see how they’re going, or do you do them in more places? This is not a planned thing for me. If something is important to me and I can support it, I support it,” he said. “It depends on who the doctors are, what happens, how it comes about. Sometimes they have a purposeful event or a purposeful cause to get involved with.”

Lauren’s visit to London, where he is staying at Claridge’s, is a flying one: He leaves for Paris on Wednesday and admitted that he’s already looking forward to devouring a bacon cheeseburger at Ralph’s, his restaurant on the Boulevard Saint-Germain.

Not that he’s been disappointed by the food here: Among the highlights so far, he said, was a meal at Petersham Nurseries in Richmond, a restaurant with dirt floors attached to a high-end garden center, and the restaurant at the Chiltern Firehouse, André Balazs’ first hotel outside the U.S.

“I feel like London is really energized — there is much more excitement, it’s much more international,” said the designer, who had not visited the British capital the past few years. “You can feel it in the stores, in the shopping — it’s buzzing, it’s alive. It’s not like the reports I heard a few years ago — so that’s good to see.”

He could be back soon: The new Marsden cancer center is set to open in 12 months’ time, and Lauren said there are plans to open a store on a corner site on Regent Street in 2015.

“People keep asking when I’m going to retire, and I’m like, ‘I’m only 26!’ I’m never going to retire until they ask me to. The last few days, I was in this restaurant [in London], and saw this couple and I wondered what it would be like to come here on vacation,” he said.

The temptation to take it easy, however, always proves fleeting. He will be 75 later this year and works out five days a week with the same trainer he’s had for a decade.

“I’m constantly moving and doing. I’m opening restaurants, and I’ve always wanted to open a hotel. I don’t know what’s going to happen next — there are always so many projects,” he said.

“It’s a big world, bigger than you can imagine. China, Brazil and India are very important, and the globalization of my company is a big thing now. It’s a very interesting time for me. I don’t feel my age. You can feel your age when you’re 30 — it depends how you’ve enjoyed your life. I’ve been able to express myself, and I’m happy about that.”