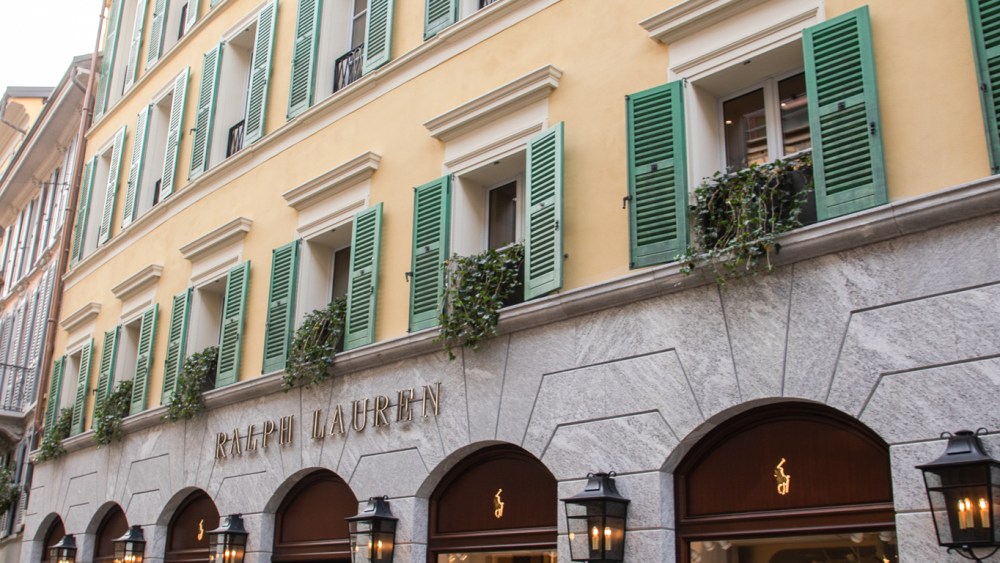 MILAN — Ralph Lauren has a new home in Milan – complete with a bar and restaurant that is likely to become one of the hottest tickets in town.

And, as always with the designer, home is where the heart is, and a feeling he has insisted upon from the very beginning.

“My first store in New York [on Madison Avenue] was also very residential, we call it the Mansion, and it changed the perception of what retail is about. I saw the clothes, the taste and the home environment as one,” Lauren told WWD during an exclusive Zoom interview. “You are walking into my home and I am welcoming you into a venue that [feels like home] yet it is elegant at the same time. It was important, [that this store reflect] the vision of how I felt about Milan.”

The new flagship is in a stately building on the pedestrian-only, cobblestoned Via Spiga and is tantamount to an open invitation into Lauren’s world — and a significant development within the Next Great Chapter strategic framework of his namesake company.

Covering five floors over almost 16,000 square feet, the beautiful store includes the brand’s first hospitality experience in Italy — The Bar at Ralph Lauren — and perfectly reflects the aesthetics of the designer, both in terms of the range of product available and how it channels his distinctive style.

Describing the flagship, Lauren said it had a “delicate sort of charming spirit, it brings you into the life you want to be part of and you don’t want it to go away.”

While he has not had the opportunity to make the trip on this occasion, Lauren has traveled to Milan many times and he admitted the city grew on him. “At first, I did not love Milan because I didn’t know it. But, over the years, I got to love it, I got to know the people and I have friends in Milan.”

In 2004, a Ralph Lauren flagship opened in nearby Via Montenapoleone, but it closed in 2015. While a global attraction, the luxury street is not pedestrian and it has a more tourist-y feel. Shying away from comparing it with Via Spiga, which is going through a renaissance of sort at the moment, with several high-profile real estate projects in the pipeline, Lauren emphasized that it is “one of the most beautiful streets in the world,” underscoring its “elegance, associated with people that love good taste and style and appreciate details.”

He characterized the new store as “warmer [than the previous one], not glass and steel, and timeless. I believe in this spirit of timelessness, in something that goes on forever and I think people want this, too. We want newness, specialness, but we also want something that feels warm.”

The flagship carries Ralph Lauren’s men’s and women’s lines as well as the RRL collection. The latter is displayed on the ground floor, while men’s Polo and accessories are available on the first floor, and Purple Label and made-to-measure are on the second floor.

Women’s wear and accessories, the Polo and Collection lines are set across the two top floors.

The interiors are crafted from traditional materials of tumbled limestone and terra-cotta. Reclaimed wood floors are paired with oak and walnut wood paneling and accented with bronze, aged brass and wrought iron.

Vintage objects, artworks, antique furniture, Persian carpets, porcelain vases from China and custom millwork pepper the store, as well as photographs of Lauren’s beloved sports and luxury cars or of iconic actresses such as Anna Magnani. All this contributes to the personal and intimate feel, despite the size of the venue. The brand’s home and gifting collections are also available for sale.

“The world is not narrow, we travel all over the world, we see things, and I’ve always believed in the eclecticness of a home. When you are welcomed in a home, you are welcomed into someone’s taste,” Lauren explained. “The paintings and the china are all elements that make for a universal, different world.

“I believe that the home collection is part of living,” he continued. A collection is “not just clothes, not just food — it’s not one without the other. We live our lives every day and if we’ve developed a sense of style in home and food, we’ve done the job. I love the mix of life.”

A central staircase inspired by residential design connects the floors and several fireplaces add atmosphere to the location.

Due to the travel restrictions caused by the COVID-19 pandemic, several steps of the store had to be completed remotely and, given Lauren’s attention to details and hands-on approach, he admitted “it was a feat.”

But he gave a shout-out to his team.

“I don’t do everything alone, I have a team of great people that have been with the company for many years, who love what I love, and there is a familiarity and sensibility, they know what I’m thinking before I’m thinking it.”

While none of Lauren’s other stores worldwide are in a palazzo, the other distinguishing feature of the new flagship is the addition of a bar and restaurant — the designer’s fourth after New York, Chicago and Paris.

Located on the ground floor, The Bar at Ralph Lauren, with its warm oak wood elements and turn-of-the-century character, has an intimate feel, and opens directly onto the rear garden for outdoor dining. The facade walls and those looking onto the garden are in a muted yellow hue, contrasting with green shutters. The garden is also another hidden gem that is typical of several storied residences in Milan, where privacy and understatement are highly valued.

The Bar will be open throughout the day, and its menu spans from cinnamon rolls and a variety of muffins and cookies for breakfast, to crab and avocado or filet mignon salads or the classic Polo Bar burger with fries for lunch. There are also a number of dedicated cocktails for aperitifs.

“I appreciate Italian cuisine but I don’t think we could reproduce it most graciously,” admitted Lauren. “We wanted to bring something to Milan that I thought was fun and exciting for young people around the world. I am here to share what I have to say, that could be interesting and exciting. I love the beauty of having a nice dish for lunch or breakfast or whatever, I love that it completes the strong sensibility of who Ralph Lauren is. The voice is not typically American, Italian or French — it’s the world of Ralph Lauren.”

He underscored the quality of the food, and recalled how, when he felt like a hamburger in Paris years ago and first thought of serving it at his restaurant in the French capital, he was told “that will never work” — a wrong forecast if ever there was one, as the line for reservations can attest. The hamburger “is a classic, but it is something that we put a lot of energy into, and the diversity of foods and people — that’s where the world is. The world is welcoming more people, more diversity, more of a sense of accepting many more styles and ideas,” Lauren said. “It makes for an eclectic and beautiful world. I don’t want to be one thing, I like the mix of our voices.”

A Ralph Lauren store should “make you feel like you want to go to the bar and go upstairs, [to do and see] things I always loved, and wished I could do as a young boy, to be part of a world that I didn’t know that well, and to be able to add to it,” he continued.

Lauren has presented his men’s wear in Milan for several seasons in the past and he said his collections are much appreciated in the country, “especially in Milan, and I know the Italian men have always loved Ralph Lauren.”

Asked if he is planning a special event or a show in the near future in the city to mark the opening, Lauren said he was “not sure. I think we will ultimately do a fashion show at some point, but we are in the thought process.”

Given the ongoing uncertainties related to the pandemic, he said he “can’t promise, but we are planning something and it should be beautiful and hopefully people will appreciate it.”

The flagship is part of the Ralph Lauren Corp.’s targeted expansion across Europe, Asia and North America, which is mapping out a mix of flagships, smaller boutiques, wholesale partnerships and digital platforms, including a local digital flagship presence. In fact, the company has partnered with key Italian retailers including Yoox, LuisaViaRoma, Slamjam, and it has a ralphlauren.it platform.

The new Milan flagship will also be accessible on a global scale thanks to an immersive shopping platform — the RL Virtual Experience, which includes dedicated gift curation and private styling appointments.

In line with the designer’s long commitment to cancer care and prevention, the company will reinforce its support of its Pink Pony local beneficiary AIRC Foundation for cancer research in Italy. Via a donation and annual fundraising initiatives, efforts will support breast cancer research.