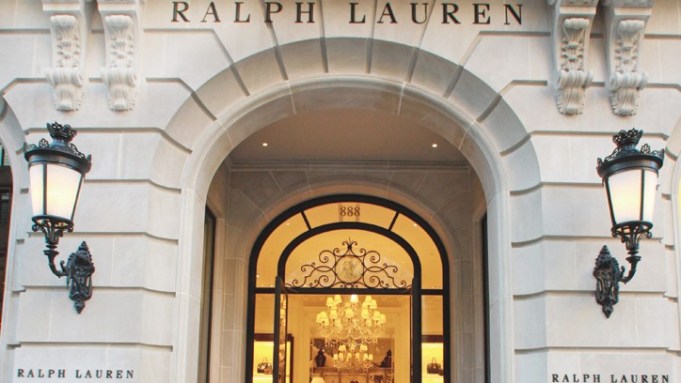 The designer will today unveil his first women’s flagship — an imposing, 22,000-square-foot Beaux Arts building at 888 Madison Avenue that was built from scratch across the street from his Rhinelander Mansion. Just like his first flagship, which is now a men’s-only store, the new women’s one has all the ingredients to become a retail icon.

Where the Rhinelander store presented the world with one of the first branded retail environments when it opened 25 years ago, the new mansion makes the ultimate case for luxury, from the French neoclassical architecture with an Indiana limestone facade, to the grand marble/4 staircase that sweeps through the four floors and paneling and moldings that give the salons a residential, Parisian feel.

That said, the scale of the store and the extensive assortment is much more than just an exercise in luxury retailing.

“This is really a statement about what I have to say today and how the company has grown,” Lauren said during an exclusive walk-through on Tuesday afternoon. “I started out working out of a drawer in the Empire State Building. I didn’t even have an office. I started with the tie, and little by little, I added product. Then I launched women’s wear.”

Polo Ralph Lauren is now a global company with sales of $10 billion, a significant focus on freestanding retail and a women’s and accessories business that has become instrumental in the company’s growth. The women’s store is emblematic of that growth. Under one roof, it showcases Lauren’s Collection, Black Label, Blue Label and RLX, as well as women’s accessories, including luxury leather goods, footwear, fine jewelry and watches.

Lauren is no stranger to the location. In 1993, the company opened Polo Sport there, which, over the years, evolved into a Ralph Lauren lifestyle boutique. That store closed more than two years ago to make room for the new flagship. No expense was spared in the process. Polo Ralph Lauren completely gutted the existing two-story building and replaced it with the Beaux Arts mansion, incorporating the adjacent town house at 22 East 72nd Street by leveling the floors.

Polo declined to disclose sales projections for the store, or the cost of building it, though industry sources estimate a project of this scale would cost in the region of $40 million to $50 million.

With the flagship, Lauren was also keen to address changing shopping patterns, and despite the scale of the store, was aware of the economic challenges of the past two years.

“What this does is prove that we believe in the world, we believe in America, and we believe that people want good things,” he said. “But what they want now is more refined. They want quality, service and attention. They want an environment they feel comfortable in.”

The flagship has a residential feel, with a series of salons marking each floor. The main floor is devoted to accessories, from a shoe salon to handbags, small leather goods, scarves and costume jewelry. The floor is also home to Lauren’s first Watch & Jewelry salon in the U.S. which, at 600 square feet, not only offers the designer’s timepieces, but also serves as the launchpad for his first fine jewelry collection. It has themes like Equestrian, Romantic and Chunky Chains.

On the second floor, the Ralph Lauren Collection offering includes a separate evening area, made-to-measure services and a salon devoted to sleepwear, which is a new category and features such items as silk and cashmere robes and silk charmeuse pajama sets.

The third floor, meanwhile, is devoted to salons for Lauren’s Black Label, Blue Label and RLX lines, each featuring an environment that reflects the brands’ sensibilities, replete with corresponding accessories offerings.

Ralph Lauren Home is available on the fourth floor, offering ample space to create actual rooms as Lauren himself imagines them.

Throughout, the store offers exclusive items. In leather goods, for instance, a special group of purple alligator products includes a Ricky bag for $17,995, a rectangular clutch for $9,995 and a Bohemian Voyager satchel for $19,995. In the shoe salon, a pair of evening sandals draped with hand-applied onyx stones retails for $1,200.

Lauren said he aimed to create a “glamorous” environment. “I wanted to really establish what the clothes are about, what the jewelry is about and what the furniture is about,” he said. “I wanted to give everything that we do a home that said, ‘this is Ralph Lauren.’”

The store, which will open its doors to the public on Friday, represents another milestone in the retail journey that Lauren and his team embarked on in 2006, when Polo opened a flagship inside a white mansion on Tokyo’s Omotesando Boulevard. The strategy continued with significant openings in Moscow in 2007; on Avenue Montaigne in Paris and Robertson Boulevard in Los Angeles in 2008 and on Greenwich Avenue in Greenwich, Conn., last year. In April, Lauren made a major statement in Paris when he opened a flagship in a 17th-century town house at 173 Boulevard Saint-Germain, replete with Ralph’s, an all-American eatery that has since become one of the city’s hottest restaurants. Lauren initially toyed with the idea of opening a restaurant at the flagship here, but decided against it to allow him to maximize his merchandise offering. “I knew we wouldn’t have enough space,” he said.

Even though Lauren has created stores all over world, New York will always be his home, and timed with celebrating the opening of the new store, Mayor Michael Bloomberg will give the designer the key to the city of New York later this afternoon. The honor is reserved for distinguished individuals who are recognized for their civic contributions, and Lauren seemed humbled by the notion.

“I am amazed, because I have loved doing everything that I have done,” the designer, who turns 71 today, said. “I never dreamed that I would be doing all the things that I have done.”