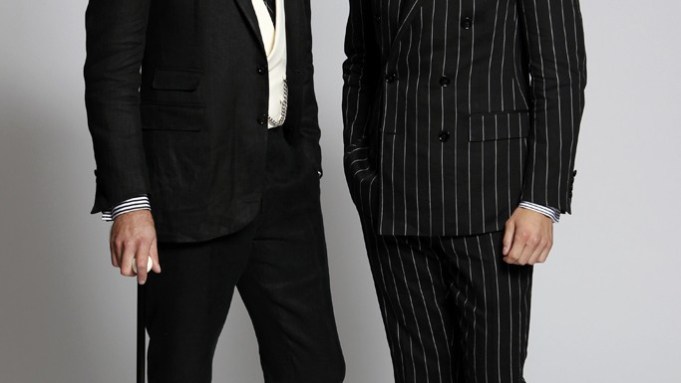 The world of Ralph Lauren keeps getting bigger and more distinctive, a strategy that is positioning the company to continue its growth spiral.

In a walk-through of the spring collection at his New York offices Tuesday, Lauren expressed optimism that his company, which last week posted a 52.4 percent jump in first-quarter profits, will maintain its strong showing in the future. “We have a lot of international growth [ahead of us],” he said. “It’s not just about the store on the corner in New Jersey anymore; it’s the world.”

The company has set its sights on growing its wholesale and retail distribution in Europe, particularly Eastern Europe and the Middle East, and plans call for launching e-commerce in France and Germany before the end of the year. Lauren said Tuesday that Brazil is also a growth area.

“Brazil is getting to be like Italy — very stylish and a love of life, and they are willing to pay for it,” the designer said.

Lauren noted that whether in Brazil, Asia or Europe, the company’s ability to target a wide range of shoppers with its varying labels — everything from the luxury-level Purple Label to the more-democratic Polo line, as well as Double RL sportswear and RLX activewear — allows it to operate “on the main street or a hip side street.”

The breadth of that offering was evident for spring in a series of vignettes that brought each of the sublabels to life.

Starting with Purple Label, Lauren said the spring collection is “much more adventurous” and targeted to the “dandy guy. It’s for the young guy who wants the ultimate in quality fashion.” Described as “a little retro but not old-fashioned,” the sophisticated offering harkened back to “The Great Gatsby” with its bold pattern-on-pattern suits with slim lapels, double-breasted vests and trim silhouettes. The neckwear, which sported bold patterns, was juxtaposed with small-collared dress shirts. In addition to a black-and-white story, there was a navy grouping, as well as one focused on browns and creams, much of it shown monochromatically. “It’s a different way to wear a suit for spring,” Lauren said. “It’s bold yet minimal.”

Two-toned shoes, based on a model that Lauren had created 25 years ago, provided a finishing touch. “The shoes lift the suit,” Lauren said.

The Black Label collection is “for the sleek, modern guy,” he said, with the core black and gray suits livened up with pops of lavender and blue. Suit models were low-cut two-button styles or six-button double-breasted and nipped at the waist, and shirts had small collars. “It’s a tight concept,” he said. “This is not a trendy guy, but he’s cool.”

Black Label sportswear made a statement with eye-popping accents of racing-color yellow and green. Pants and shorts were slim, and leather shirts were a surprise addition. “This guy drives a Ferrari,” Lauren said.

Black Label Denim, which was introduced last season, has been expanded for spring with a safari-inspired grouping, unconstructed jackets, chinos and bleached-out and colored denim.

The flagship Polo collection continues to speak to the “diehard preppy,” Lauren said, with natural-shoulder three-button jackets with wider lapels and traditional patterns of herringbones, gabardines or plaids. Weekend sportswear looks included drawstring cargoes, khakis, fishermen sweaters and vintage ethnic prints inspired by mountaineering and camping — or: “Heritage pieces done in a new way,” according to Lauren. There was also a country-club grouping with seersucker and patchwork patterns. “This gives him ammunition for the weekend,” Lauren said.

The Double RL offering featured more tailored pieces and furnishings for spring, allowing this “cult” customer to shop for a complete wardrobe. “We opened a store on Bleecker Street, and it’s doing very well,” he said. “There’s so much interest in suits in Double RL.”

The RLX active line was an explosion of color, with an infusion of bright oranges and lime greens. Although high fashion, the collection is also high performance, targeted to the runner, mountain climber or sailor.

The company also showcased an array of accessories, everything from tie bars and cuff links to all iterations of leather bags. The company’s shoe collection has been expanded, ranging from classic British lace-ups to espadrilles and boat shoes.