Polo marks 10th anniversary of its online launch with a technological spectacle.

By Marc Karimzadeh and Samantha Conti and Nina Jones on November 12, 2010
View Slideshow 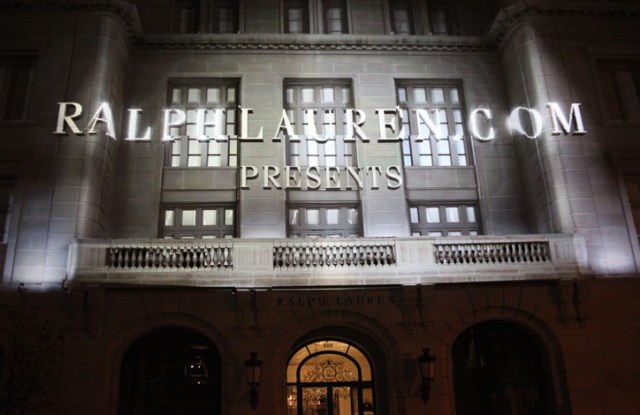 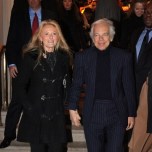 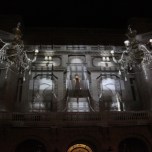 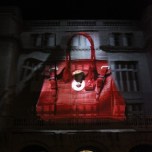 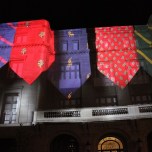 This story first appeared in the November 12, 2010 issue of WWD. Subscribe Today.

On Wednesday night, most in the 1,000-strong audience agreed that the four-dimensional light show to celebrate a decade of technical innovation at Polo was a moment to be remembered. During the eight-minute presentation, people regularly burst into applause and shouts of awe, culminating in the moment that a hologram of Ralph Lauren himself peeked out of one of the windows and looked onto the crowd.

Front row and center, Lauren himself watched the event unfold. He was joined by his wife, Ricky, son Andrew, daughter Dylan, as well as key senior executives from Buffy Birrittella to Wayne Meichner, Betty Ann Gwathmey and Jerry Lauren, his brother.

Polo had been given permits to close off two lanes of traffic and, for the first of the three showings, traffic was halted on Madison Avenue between 71st and 72nd Streets.

The technology involved architecturally mapping the store and digitally recreating 3-D replicas, and Lauren, who just built the imposing mansion to house his women’s and home categories, was prepared to see it disappear in a David Copperfield-like stunt.

“It comes back, so it’s OK,” he said with a smile, adding that he deliberately didn’t preview the entire show before Wednesday night. “I wanted to experience the magic like everyone else.”

“It was incredible, beautiful, very moving and almost like an epic experience,” said Elizabeth Berkley, who is married to Greg Lauren, the designer’s nephew. The actress particularly liked the succession of images that traced the history of the company over more than four decades, as well as the virtual runway show along the building’s facade. “We’re used to being transported like this in movie theaters, sitting in the dark,” she said. “This was on the street, in the middle of the life.”

Across the pond, Polo staged a similar show at the Ralph Lauren store on London’s New Bond Street, which was attended by David Lauren, executive vice president of advertising, marketing and corporate communication of the company. Guests including Jefferson Hack, Laudomia Pucci, Patrick Grant, Lillian von Stauffenberg, Marvin and Lee Traub and Joshua Schulman all crowded onto a packed Bond Street to see the spectacle. Earlier on Wednesday, David Lauren admitted he was nervous: “We did a sound check last night and all these car alarms were going off. Talk about waking up the neighborhood.”