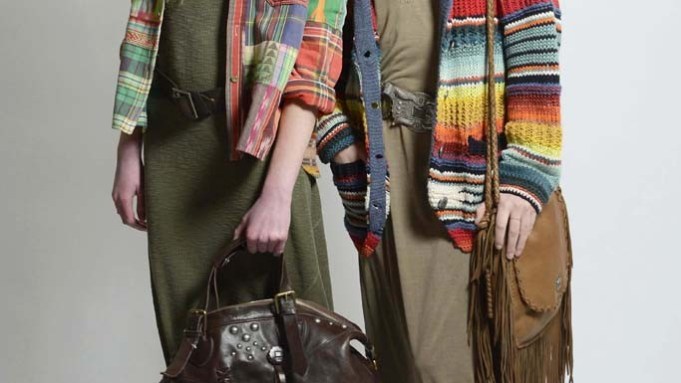 NEW YORK — Ralph Lauren and Polo are synonymous. It’s surprising, then, that Lauren has never offered women’s under the Polo moniker, but that’s set to change. Today, the designer will kick off his fall runway show by unveiling about 25 looks from the new women’s Polo Ralph Lauren brand, which is making its debut for fall.

Lauren mulled the pros and cons of showing Polo and Collection on one runway for some time, but decided in favor of it because, as he put it, “I love the contrast of Polo’s cool eclectic spirit with the luxury and modern glamour of Collection.” His fall Collection show will follow the Polo runway launch.

The move is part of Ralph Lauren Corp.’s larger global push to capitalize on the recognition and strength of the Polo name amid the group’s brand portfolio.

“I felt like it was time that I should explode this,” Lauren noted. “I thought, ‘What am I not doing? How am I going to make this company stronger? How will I define these brands?’ It’s not about what’s expensive. The same girl that wears this will also buy Black Label and Collection. We’re giving her a diverse mood that she hasn’t seen.”

Polo is not considered a secondary, lesser-priced line. It offers a depth of product at a wider range of price points, which, comparable to men’s, is from $89 for a basic knit top to $998 for leather leggings.

“Blue Label was a category of clothes, but not defined in the same way Polo is,” Lauren said. “This is a clearer picture of women and girls, age anywhere from 16 to 60. Where we would have done the country look, this is about the young woman today who lives downtown and works. She’s active on weekends. You’ll still see the sensibility of Ralph Lauren. You’ll say, ‘I know this is Ralph Lauren,’ but it has never been defined in a major story with all the categories.”

There are plenty of aesthetic touch points: Americana, Aztec, Navajo, plaids, florals, ruffles and suedes, to name a few. Many of the looks exude a sense of nostalgia, though they don’t look vintage. There is also a rugged, outdoorsy element.

“Everyone thinks Polo is going to be preppy,” Lauren said. “This is not about preppy.” To him, the Polo woman is “chic” and “sophisticated”; “bohemian” was another word bandied about internally.

Dresses, for example, are rendered in silk georgette, while tartans are worked in new ways. A buffalo plaid is used for a hunting jacket. A tweed cutaway coat is shown with a romantic georgette dress; a waffle knit, inspired by long johns, was used for an olive-colored dress and shown with a patchwork flannel shirt. The accessories capture a similar vibe, including rugged bags and high-heel platform hiking boots.

The collection will make its big retail debut this fall, when Lauren opens a Polo flagship at 711 Fifth Avenue here, between 55th and 56th Streets, replete with a restaurant situated in the former La Côte Basque space. The restaurant may or may not be called Polo — the name is still being determined — but the designer knows that it won’t be a replica of his other two eateries. “Ralph’s [in Paris] was a big hit, but it won’t look like Ralph’s,” Lauren said. “This one is sportier and younger. It has a casualness.”

Fifth Avenue is just one of several Polo retail units slated to open though the only one with a restaurant for now.

Last week, in reporting that net income for the three months ended Dec. 28 rose to $237 million and net revenues to $2.01 billion, Ralph Lauren Corp. said that it was accelerating Polo with concept stores in the China region, including its first dual-gender flagship at Lee Gardens in Hong Kong, and a 20,000-square-foot space has been secured on London’s Regent Street. There are also plans to open more locations in the U.S., Europe and other parts of Asia over the next few years.

“I never had an opportunity to really show it clearly,” Lauren said. “I had to clarify it. This is Polo for women, the counterpart of men’s. It’s a real world.”