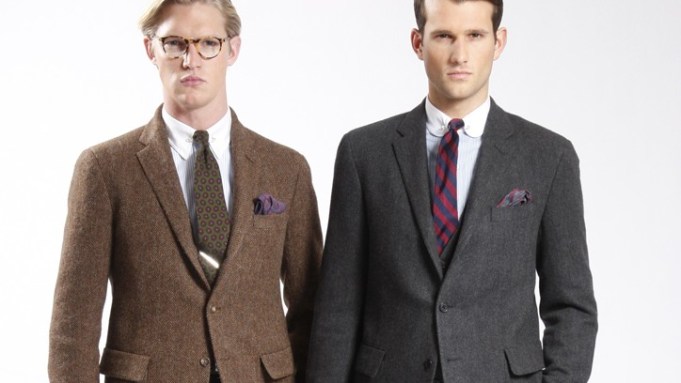 Other firms might be scaling back given the economy, but not Ralph Lauren.

The designer unveiled his sweeping fall collections in a massive new men’s showroom at Polo Ralph Lauren headquarters on the same day the company’s quarterly profits beat expectations. Striding from one collection to the next, Lauren showed off the breadth and variety of product that keeps his brands in demand around the globe in even the grimmest economic conditions.

“What I want to show here is the diversity of this company, our ability to move and be ahead of the game,” said Lauren. “This is a company that gives you everything.”

This season, “everything” encompasses styles ranging from an update of the American sack suit to a formal Nehru jacket, futuristic athleticwear, antiqued Western wear and much more. The Polo sack suit does away with darts and shoulder construction, but its shorter length and two buttons keep it current.

“It’s very elegant, with a 1950s sensibility,” Lauren said. “It’s our kind of preppy, and young people are responding to preppy in a strong way. We have a very strong audience for this.” Polo tailored clothing also included sport coats with wide notch lapels, worn with wide ties or turtlenecks, and pops of tangerine, purple and green.

“When I started 42 years ago, this is what I did to combat the cookie-cutter guy on Madison Avenue. It has more boldness. We have stripes, tweeds, brown. It has heritage — my heritage,” said Lauren.

“We’ve worked to make this all young,” said Lauren. “When I show you Polo, it’s not like I’m trying to go backwards. I think there are young people who want this. They don’t go just one way. Fashion is not one story. It’s many stories.”

In Ralph Lauren Black Label, the minimalist luxury collection, the story was the earthy palette of browns, maroons and olives, with a base color of charcoal continuing into faded black denim.

“This is modernness with sophistication,” said Lauren.

Purple Label continued to deliver the most traditional luxury, from Italian-made power suits to casual sportswear options like snowflake intarsia sweaters and plaid “flannel” shirts made of cashmere. Charcoal suits were layered up with lots of textured knits, shearling and suede. And light brown country suits were worn with beige, mint or lavender shirts.

When the Rhinelander Mansion on Madison Avenue reopens as a men’s flagship in September, an entire floor will be dedicated to Purple Label, including made-to-measure service.

“That is the ultimate ultimate,” said Lauren. And as the company extends into emerging markets, the customers there are also demanding such absolute luxury, he said.

RRL isn’t advertised or publicized because it’s for “the antifashion guy,” explained Lauren. The showroom resembled a small-town general store and contained vintage-y Americana such as workwear, Western wear and lots of denim. “Everything here is hand-nurtured at every level,” said Lauren. (The label launched women’s for spring, showing RRL jeans on the women’s runway along with Ralph Lauren Collection.)

In the next room, RLX was displayed in a glassy white studio decorated with futuristic typefaces. “This is the complete antithesis of RRL. Totally modern, active fashion,” said Lauren. A mix of white, silver and neon sportswear bore heavy athletic and technical influences. “This is how to look low-key in a very contemporary and sexy way. It’s lightweight, functional. There’s authenticity in the utility,” said Lauren. A dedicated RLX store will open in Malibu in March.

In addition, the company is readying a new, 30,000-square-foot Paris store and restaurant on Boulevard Saint-Germain for April. It will include an RRL department. His-and-hers Madison Avenue flagships, including the remodeled Rhinelander, will bow in September.