The initial line of shirts, jackets, caps and sweats feature the Yankees, Dodgers, Cardinals and Cubs.

As a kid growing up on Mosholu Parkway in the Bronx, Ralph Lauren lived and breathed the New York Yankees. A lifelong dream became reality in the fall of 2018 when the then-78-year-old designer was invited to throw out the first pitch at Yankee Stadium to commemorate his brand’s 50th anniversary.

That collection, which sold out almost immediately, has led to a larger collaboration with Major League Baseball. Starting today, Lauren’s company will launch a three-collection partnership with the league to design collections for some of baseball’s most popular teams. The first offering will include the Yankees, Los Angeles Dodgers, Chicago Cubs and St. Louis Cardinals. Later this year, the Boston Red Sox and other teams will be added. The collection will feature polo shirts, jackets, sweatshirts and New Era caps for adults and children and will include special team-themed Polo Bear polos and sweatshirts. 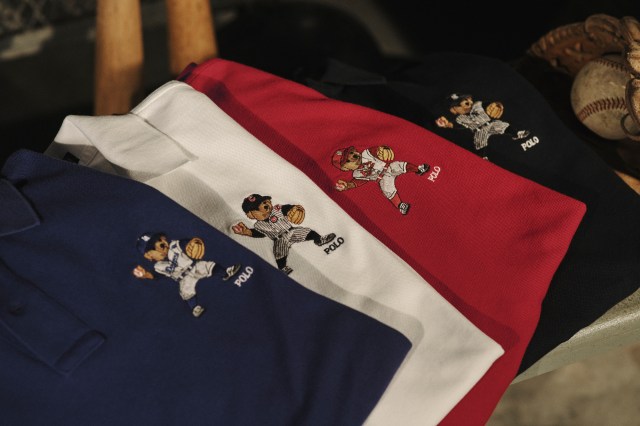 Special Polo Bear shirts have been created for the collection.  BMG_PHOTOGRAPHY

“It started with the invitation to pitch,” said Ralph Lauren’s son David Lauren, vice chairman and chief innovation officer for Ralph Lauren Corp. As the designer was preparing for his big night on the mound, it “reawoke so much of his childhood. He started to talk a lot about growing up in the Bronx and what the Yankees meant and what baseball meant, what stickball meant, and then there was the opportunity to do a special capsule for the Yankees.” 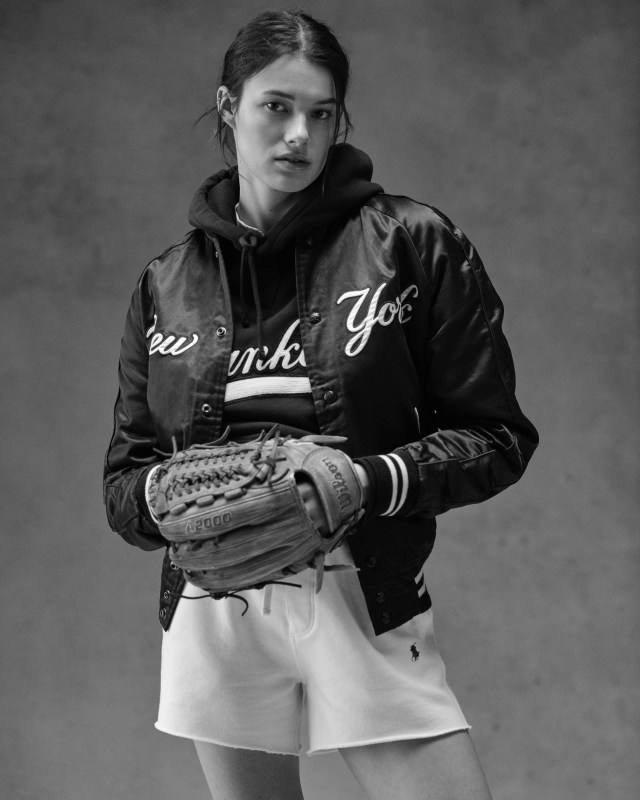 A look from the Yankees collection.  BMG_PHOTOGRAPHY

David Lauren said by the time his father walked off the mound after throwing the ball to catcher Gary Sanchez, the collection had sold out. “I remember him going back to his seat, everybody was cheering and somebody asked him, ‘Ralph, how do I get that jacket you’re wearing?’ He said, ‘You can get it at the store or online.’ And I’m whispering to him: ‘It’s gone.’ He couldn’t believe it was gone by the time he sat in the dugout,” his son recalled.

That success led to a larger conversation with MLB, which asked the designer to work on a more comprehensive initiative and include other teams. The decision was made to start with four, and add the Red Sox in September, David Lauren said. And if this is as successful as expected, “our goal is to add more teams,” including the Yankees’ crosstown rival, the New York Mets.

Lauren described the first drop as “much more classic. It’s staying with the team colors — my dad wanted something that was really authentic to the teams, but we added some red satin jackets for the Yankees, and things he thought looked really graphic. There are some interesting twists.”

For fall and holiday, there will be what David Lauren described as “a few more fashion surprises” that will include “some of the iconography of Ralph Lauren.” 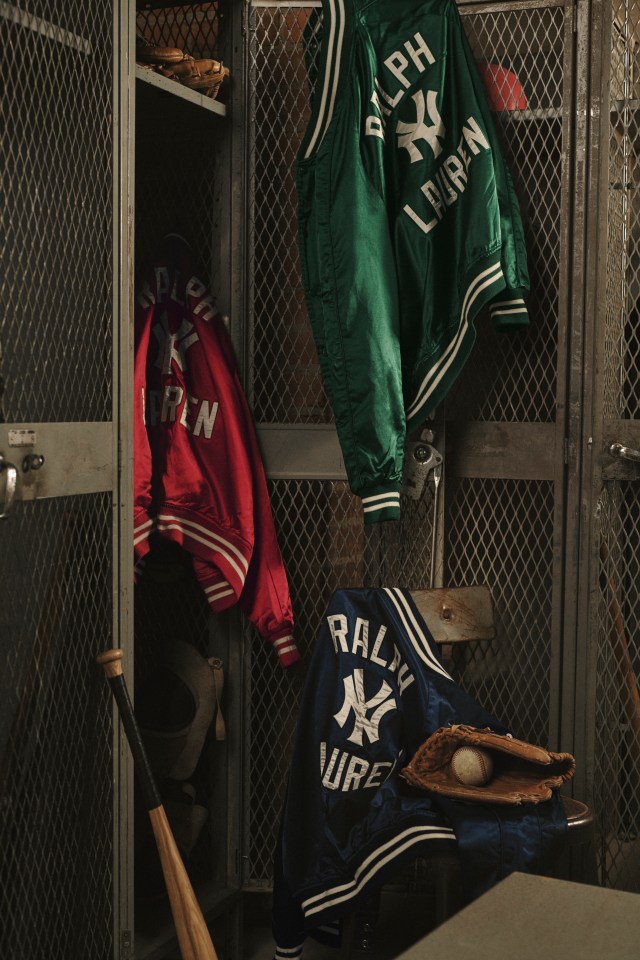 “We wanted to do something very authentic for the first delivery and that guarantees interest from the fans, and as people see it evolve, we built that into the equation,” he continued, adding that there will be three deliveries before the end of the year.

The partnership will be promoted through a digital global campaign inspired by vintage baseball cards that will be featured on outdoor wallscapes and murals in key cities. In addition, Ralph’s Airstream, a custom mobile home, will go on a cross-country tour, stopping in select locations including New York City and Chicago offering baseball-themed food and drinks including hot dogs and fries to fans and selling the product at certain stops. Select wholesale partners will offer co-branded Ralph Lauren x MLB popcorn as a gift with purchase. 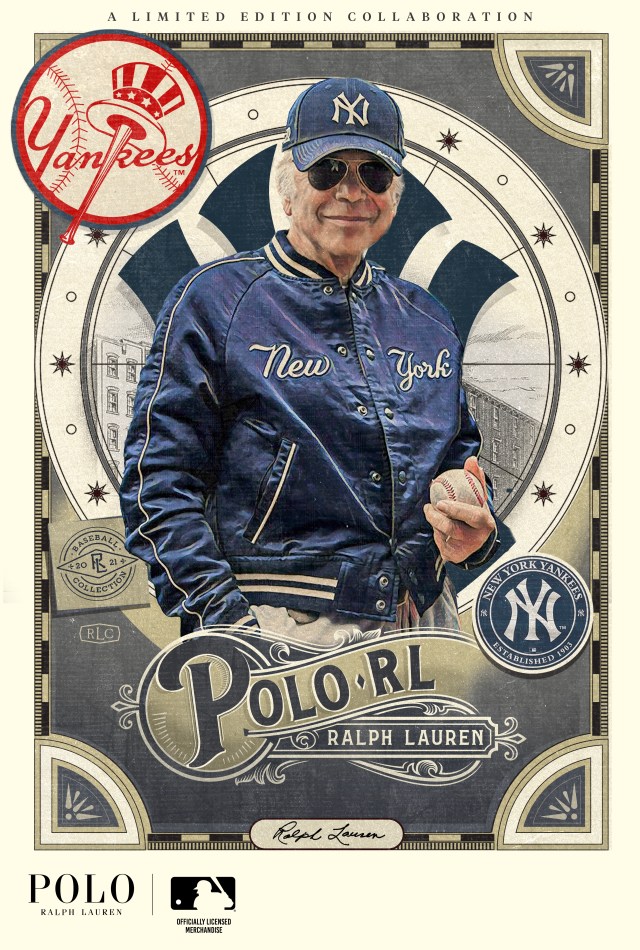 Ralph Lauren is featured on a vintage baseball card.

The collection will be available beginning today at Macy’s, Bloomingdale’s, the MLB flagship in New York City, select MLB Club stadium shops, at some Ralph Lauren stores around the world, online and on the Polo app. Prices will range from $69.50 for hats and $125 to $148 for polos to $168 for a hoodie and $498 for a jacket. The children’s collection sells for $49.50 to $295.

The partnership with MLB is the latest sports collaboration for the Ralph Lauren brand. The company also works with the U.S. Olympic and Paralympic teams, Wimbledon, the U.S. Open, the Australian Open, the PGA of America, the U.S. Ryder Cup team and the American Junior Golf Association.

Most recently, the brand unveiled the closing ceremony uniforms for the U.S. team for the upcoming Summer Olympics in Tokyo.

David Lauren said: “Like the Olympics, this is Ralph Lauren celebrating the American spirit, the American pastime, a piece of the world he grew up with that is evolving into the future and, like Polo and Ralph Lauren, seems to get better with age. Baseball just becomes part of our culture. It creates an emotion in our lives that we need more than ever now. People can’t wait to go back out to a baseball park and cheer together for their favorite team and to feel a togetherness and a spirit. And baseball and sports just have a magic that you can’t replicate. So to be a part of that energy, at this time in history, is very special.”