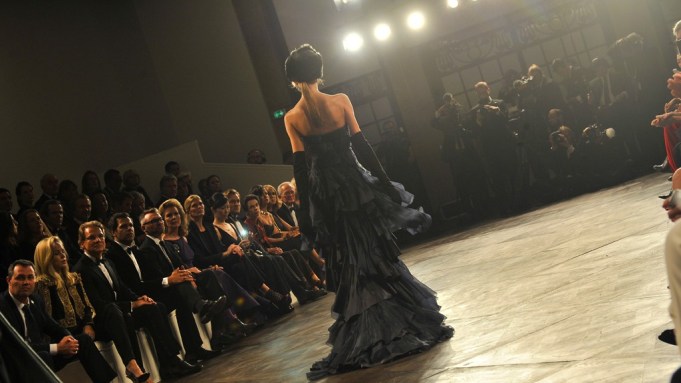 PARIS — What does Ralph Lauren have in common with John Singer Sargent, Edgar Degas and Henri Matisse?

Besides an artistic bent, the American designer now also shares a connection to the famous Paris school those painters attended, the École Nationale Supérieure des Beaux-Arts.

On Tuesday night, Lauren hosted a black-tie event at the sprawling site on the Left Bank to kick off a two-year commitment to help restore and modernize the Beaux-Arts’ historic amphitheater. The evening included his first runway outing in the French capital, reprising his fall show for 250 journalists, clients and VIP guests, who were mostly from the ’hood. Charlotte Gainsbourg performed “Heaven Can Wait” and “The Songs That We Sing” after dinner.

Other VIPs in attendance included Arielle Dombasle and Lambert Wilson.

After watching models including Daria Strokous and Anna Selezneva parade in Lauren’s jaunty peacoats, Cossack pants and velvet dresses in a collection that nodded to Russia and Parisian chic, Wilson said, “It’s nice to see when it’s consumable; so realistic.” The actor was alluding to the fact that the clothes are actually in stores, and not just runway razzle-dazzle.

Dombasle seconded the notion, confessing that she had already tried on some of the runway looks at the boutique (though she wore Lanvin to the party).

“This is another exciting moment for me, and a first,” Lauren said in an interview Monday, seated on a wooden bench in the semicircular lecture theater he’s restoring. The central feature of the soaring space is a 90-foot Raphael-esque mural by Paul Delaroche representing 75 great artists across the ages. “It’s very impressive,” he sighed, craning his neck to take in the panoramic painting.

Thanks to Lauren’s largesse, the room is to be equipped with modern stadium seating and state-of-the-art audio-visual equipment, while restoring its cupola and other period features. Construction work should start in early 2014.

Ralph Lauren Corp. has also earmarked funds to modernize the school’s Web site with digital content, along with online classes, workshops and symposiums.

The designer’s appetite for restoring the architectural splendor of Paris — and deepening affection for the school’s Left Bank environs — was ignited during construction on his European flagship on the Boulevard Saint-Germain, which involved a painstaking restoration of a 17th-century town house.

“When we did that store, it was quite an amazing thing because there were so many things buried below,” the designer said of the 23,000-square-foot unit, which opened in 2010, complete with a 128-seat Ralph’s eatery in its leafy courtyard.

While Ralph Lauren Corp. has not disclosed financial details, it is understood the improvements to Beaux-Arts will represent a financial commitment of several million dollars.

“This place really needed work so I feel really good about what I have done,” Lauren enthused, lauding the institution’s “amazing history.”

The origins of the school stretch back to 1648, when King Louis XIV was said to have recruited architecture graduates to decorate the royal apartments at Versailles. Its mission has long been to educate the most talented students in drawing, painting, sculpture, engraving and other media.

“And it’s right around the corner from where I have my store,” Lauren noted.

The designer, who famously started out selling men’s neckwear out of a drawer in the Empire State Building, said he relates strongly to the Beaux-Arts, given that it provides opportunities to students wishing to express their creativity.

“I know what it was like for me starting out. I didn’t have the money, nor the wherewithal to do all the things I wanted to do,” he said. “To help young people going through [school] is a very wonderful thing. To help one of the most culturally important places in France was also very important. And it’s badly in need of help.”

The École des Beaux-Arts, which has hosted an array of fashion shows and parties over the years, is a sprawling complex of buildings, mainly from the 17th, 18th and 19th centuries, prized for their elaborate frescoes, moldings and statuary.

Lauren’s restoration effort telegraphs his growing affection for Paris, which he calls a “second home.”

The designer recently selected Paris for a major exhibition of his vintage racing cars. That 2011 showcase at Les Arts Décoratifs attracted 155,000 visitors.

In the interview, Lauren lamented that his romance with Paris blossomed late.

“I feel sorry now that I haven’t spent more time in Paris through the years because I find it very exciting and beautiful,” he said. “It grew on me. I used to go to London all the time. I could relate to it because I speak the language…I don’t speak French so it’s a little harder, but as I have been coming back more and more people speak English, and I feel a strong reception here.”

Lauren confessed to being “slightly intimidated” showing in Paris “because there are a lot of great designers here, they do wonderful shows. But this is not a competitive show.…It’s for consumers, to show them what I stand for and what I do.…I think it’s one of my best shows, and I am very proud to bring it here.”

Asked if he would ever consider unveiling a new women’s collection in Paris, he acknowledged, “I have thought about it from time to time. The logistics are complicated.”

In fact, so smitten is Lauren with Paris that he recently entertained the idea of living in the French capital.

“It would be an interesting change to be able to partake in living here and thus working here. But it’s a public company, it’s complicated,” he said of his New York-based fashion firm, which posted fiscal 2013 revenues of $6.9 billion. “I think everybody thinks of living here one way or another. But I am thrilled to do the show here, thrilled to express myself.”

To be sure, France remains an important market for Lauren, one of his largest in Europe. The designer was a pioneer American in opening his first Paris store, on the Place de la Madeleine, back in 1986, the same year he unveiled his Manhattan flagship in the Rhinelander mansion.

In 2008, Lauren also christened a 6,500-square-foot women’s boutique on the tony Avenue Montaigne, home to Harry Winston, Fendi, Gucci, Chanel and the historic boutiques of Christian Dior and Nina Ricci.

“It’s been a very receptive place, people have been wonderful to me,” he said of the French capital. “It’s wonderful to be accepted in a country that I respect and has such great beauty, art and history.”

Lauren said he’s particularly fond of the Saint-Germain neighborhood, and some of its iconic residents, like Deneuve and Anouk Aimée.

“I’ve had a great crush on Catherine Deneuve for many years,” Lauren said, also noting Aimée’s “A Man and a Woman,” from 1966, remains one of his favorite movies. “These are iconic people.

“Without a doubt women in France are beautiful. They wear their clothes in a very understated way,” he added.

As for the Saint-Germain neighborhood, Lauren said he feels right at home because “it’s artistic, it’s got history and it’s more low-key. It’s not the prime, fast-moving area. It’s got a sense of life and living. It’s a beautiful place to be. I’ve always loved the Left Bank,” he said.

What’s his favorite restaurant in the French capital?

“Ralph’s,” he said. “My wife and I look forward to coming here because we love the hamburgers.”

Were he to start his career all over, could he be tempted to enroll in the Beaux-Arts?

“I guess this is the school I would have wanted to go,” he continued, calling his sponsorship effort “the best way to be part of the school.”