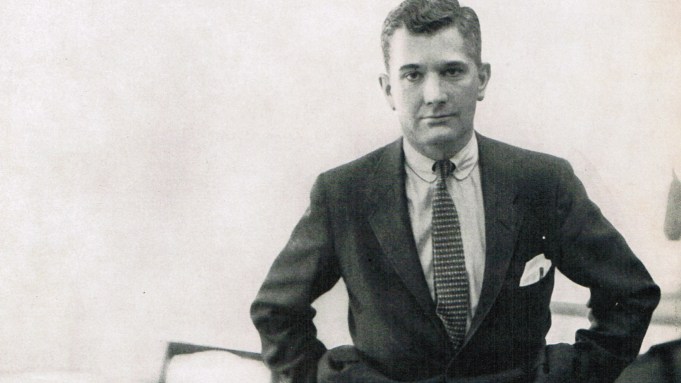 Jens Risom, who introduced classic Scandinavian-style furniture design to the U.S. in the early Forties and has had a lasting imprint on the industry ever since, turns 100 on May 8.

To celebrate the legendary designer, Ralph Pucci International will launch a Jens Risom show at his Los Angeles showroom Wednesday during the WestWeek furniture fair. It will travel to Pucci’s showroom in New York on May 16, during the city’s International Contemporary Furniture Fair, and to his Miami gallery on Dec. 1 for Art Basel.

“I teamed up with Jens 11 years ago when he was like 88,” Pucci told WWD. And comfortably retired as well, Pucci added. “It marked his reentry into the market.”

Pucci was intrigued by the idea of redeveloping Risom’s furniture with high-quality manufacturing methods. Through the decades, Risom’s furniture was mass produced and retailed at very accessible prices at Design Within Reach and other furniture stores. Pucci’s approach is much different, incorporating Risom’s aesthetic with “the Old World, hand-craftsmanship of small workshops in the New York area with European roots.” They’re the kind of workshops typically associated with more ornate design.

“All Jens’ pieces are pared down and designed with such simplicity,” said Pucci, who has the exclusive rights to the vast majority of Risom’s designs. At Pucci, the Risom furniture retails from $8,000 for a club chair to $20,000 for a sofa.

Risom was born in Copenhagen in 1916, the son of Sven Risom, a prominent architect and a member of the school of Nordic Classicism. Jens Risom was trained as a designer at the Copenhagen School of Industrial Arts and Design. He arrived in the U.S. in 1939. Among the more pivotal events in his life, in 1942, he teamed with Hans Knoll of Knoll furniture manufacturing. During World War II, Risom served in the infantry under General George S. Patton. He got permission to use pieces of army parachutes to create web upholstery for chairs, a look that has become ubiquitous. “It was a new way of creating furniture,” Pucci noted.

Risom worked for a few years after the war with Knoll, and later opened his own firm. Ultimately, he became part of the vanguard establishing America as a leader in modern furniture design and manufacturing, though much of the industry has since moved overseas. Risom’s chairs are in  permanent collections at the Museum of Modern Art, the Yale Museum, the Brooklyn Museum, the Smithsonian Institute of New York City, the Rhode Island School of Design Museum and the Cooper-Hewitt National Museum. He became the third recipient of the Brooklyn Museum Modernism Design Award in 1994 for Lifetime Achievement. He was knighted by Queen Margrethe of Denmark with the Danish Knight Cross, and President Lyndon B. Johnson used his chairs in the Oval Office. Risom resides in New Canaan, Conn.

Ironically, two of his designs from the Fifties that weren’t particularly successful back then — an A-line chair and the “Big” chair and ottoman set — were redeveloped by Pucci a few years ago and have been bestsellers. “He was surprised I decided to redevelop these chairs, but they really reflect the timelessness of his design,” Pucci said. “The A-line has a nice sexy line to it and wood detailing that separates it from other pieces on the market. I felt it was very comfortable, and could be the main chair in a room or an accent piece. It’s very flexible in the environment.

“The Big Chair to me is almost like sitting on a piece of sculpture that’s comfortable. It’s very practical and beautiful. The scale is big but not overpowering.”

For the shows, those two pieces and about a dozen more will be displayed, primarily in shades of cream, white and oatmeal. “They’re iconic pieces we redeveloped that signify his heyday in the Fifties,” Pucci said. A large graphic on the back wall will herald “Jens Risom, 100.”

“Jens’ approach to design is less is more,” Pucci said. “In his own way, he’s  almost a minimalist. There are no tricks. He always said the furniture has to be comfortable. His heroes have been architects, not decorators.”