The first swimwear and beachwear capsule will be in stores in April but six pieces will be unveiled during the Ralph & Russo spring 2021 show.

A sketch from the Ralph & Russo La Perla collaboration.

MILAN — Ralph & Russo and La Perla have inked a year-long partnership that will see the launch of two co-designed capsules.

The first will comprise swimwear and beachwear designs, to be launched in April. However, six looks will be unveiled today during the livestreamed Ralph & Russo spring 2021 show.

“Luxury lingerie is the best friend of ready-to-wear luxury,” Pascal Perrier, chief executive officer of La Perla Global Management (U.K.) Ltd., told WWD. Perrier sees “huge potential” in the agreement, with the two brands “not competing but complementing each other.”

Perrier said he had long been interested in Ralph & Russo, a directional brand that also has a large social media following, he said, and that “glorifies women, making them feel good and beautiful, sharing this quality with La Perla.”

Designer Tamara Ralph also underscored the synergies between the two brands. “They are both designed by women for women and hold luxury and craftsmanship as core values,” she said, referring to Alessandra Bertuzzi, head creative designer of La Perla.

Both Ralph and Perrier spoke of an “organic and natural” agreement that was easily negotiated. “I love La Perla’s heritage, their technical abilities are incredible, as is their archive,” said Ralph.

Michael Russo, chief executive officer of Ralph & Russo, described the investment at the time as strategic, and said it signifies “an important step in allowing Ralph & Russo and our team to realize our long-term growth plans whilst keeping the brand privately owned and managed.”

Ralph said she had long been interested in swimwear, and that she had dabbled with the category with one-off designs in the past. “This is part of an extension for the brand and a long-term strategy,” she indicated.

Swimwear is a division that La Perla is looking to further develop. “It’s very interesting and it is less seasonal than it used to be in the past,” said Perrier, referring to the brand’s global business.

The executive is aiming to recover the Bologna-based brand’s positioning in swimwear it had in the Nineties.

The collection will be available starting in April on both brands’ online stores and selected flagships and partners.

There are about 35 pieces in total in the swim and beachwear collaboration collection.

While prices are still being finalized, the pieces will be positioned in the luxury range. La Perla swim and beachwear pieces span from 350 to 1,000 euros, depending on the intricacies of the design.

The color palette of the looks that will be previewed on the runway will include bright orange, lemon yellow and carnation pink contrasted with mocha, metallic bronze and crisp white hues.

Styles include a mocha asymmetric one-piece swimsuit with soutache embroidery and a white linen kimono beach cover-up with bronze soutache appliqué and sequins. 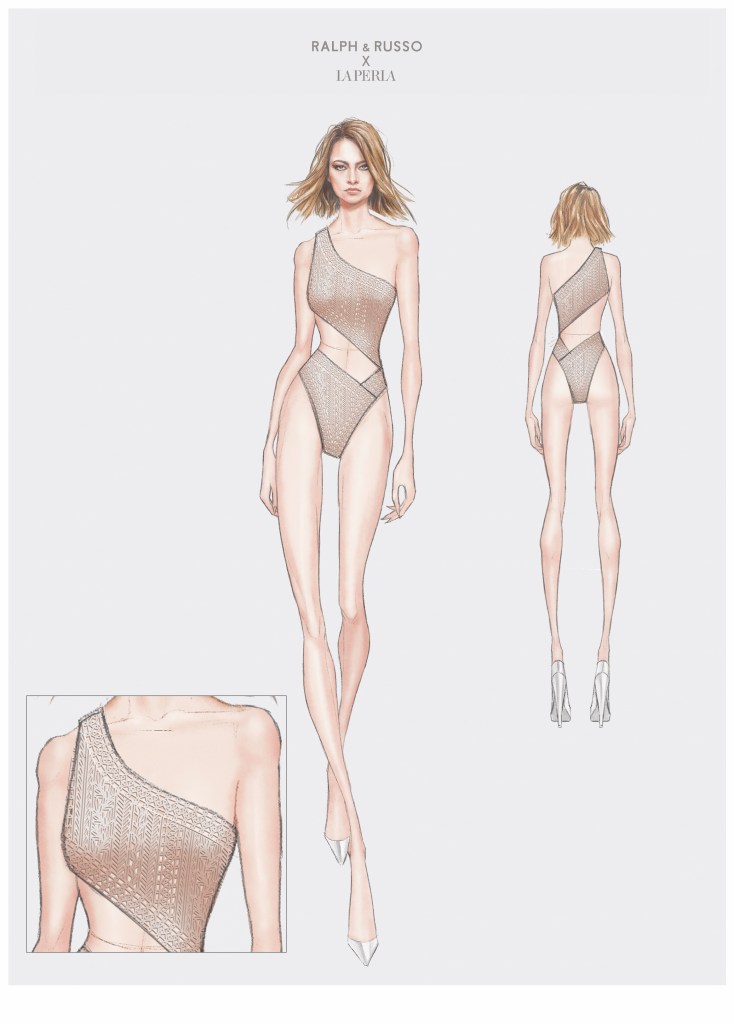 A sketch from the Ralph & Russo and La Perla collaboration.  courtesy image

The capsule adds joy to the lineup, “making one dream of holidays and escaping” at this moment of uncertainties, said Ralph.

Over the past few months, La Perla has been spearheading a restructuring, leveraging its Italian creativity and craftsmanship and streamlining its organizational structure and rationalizing its workforce.

The goal is to expand its position in the luxury segment and modernize the brand in a bid to attract a wider, younger and more inclusive audience. It is updating its product offer and expanding its retail network, and increasing its investments in digital communication and to enhance its e-commerce capabilities.

Ralph & Russo was founded in London in 2010, and rapidly built a name in couture, becoming the first British guest member of the Chambre Syndicale de la Haute Couture in more than a century. The brand has since expanded into high-end, ready-to-wear and accessories.

The London-based brand has a host of celebrity and international customers, with Meghan Markle wearing a Ralph & Russo skirt and top for her official engagement picture in 2017. Jennifer Lopez, Rihanna, Kaia Gerber, Gwyneth Paltrow and Bella Hadid have all been snapped wearing the brand’s feminine, embellished designs for red-carpet events.