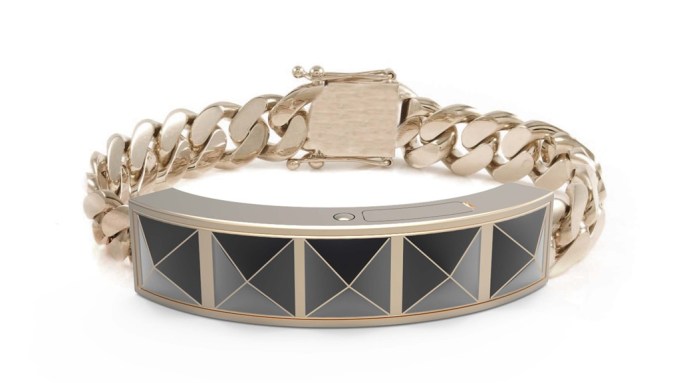 Wearables that double as jewelry will launch at the designer’s spring runway show next week, including a gold chain-link bracelet with a silver bar and pyramid studs that’s actually a wearable notification bracelet. The $120 accessory, which will go on sale during the holiday season, alerts the wearer to calls and texts via a Bluetooth pairing with her mobile device. A $60 lightning cable bracelet, hitting stores in early November, connects to a USB cable to sync or charge a mobile device — and also happens to be black leather, adorned with flat gold studs and a clasp that hides connectors.

To the naked eye, observers wouldn’t know either of the bracelets contains any technological capabilities — which is part of Minkoff’s plan to reach the increasingly connected Millennial consumer. “We wanted to go after wearables in a different way,” Uri Minkoff, chief executive officer at Rebecca Minkoff, said. “Health is covered [in the wearable space] but at the end of the day, our customer comes to us for fashion — and as we look at this fashion-function mix, it’s really where she’s living. This is a hybrid area where we think we can have success with this customer.”

Created in partnership with Case-Mate, the five-item collection also includes a compact mobile charger, iPhone cases and a wristlet that come in varying colorways and retail from $40 to $80. The product will go on sale at rebeccaminkoff.com and Nordstrom in September, with some pieces rolling out closer to year’s end. The product will also be carried in the three Rebecca Minkoff stores that will open in November and December, the first bowing in New York’s SoHo neighborhood on Nov. 12.

He noted that the development of the notification bracelet resulted, in part, from a backlash against a working woman who had her mobile device on her at all times — often at the table during a meeting or dinner. “There are a few people that a woman, for emergency purposes, has to have some connection with,” Minkoff said, explaining that she can still be in touch and have her phone put away, but if it’s one of those few people trying to reach her, she can take it out and it’s acceptable.

The fashion community has been eager to embrace wearable technology. Ralph Lauren introduced a smart shirt at the U.S. Open earlier this week and Tory Burch launched a series of corresponding accessories to up fitness tracker Fitbit’s fashion profile. Diane von Furstenberg worked with Google Glass to create a collection of optical and sunglasses for Net-a-porter in June — a fitting partnership as she was the one to usher in fashion’s wearable moment with the introduction of Glass at her spring 2013 runway show in September 2012.

“Our girl wants to wear bracelets and jewelry and she has this relationship with technology, but for us, we’re adding function into very fashionable items she would choose to buy, whether they were tech-enabled or not,” Minkoff said. “It’s a dual-purpose thing. We’re not forcing her to have a lifestyle change, but added this dual functionality.”