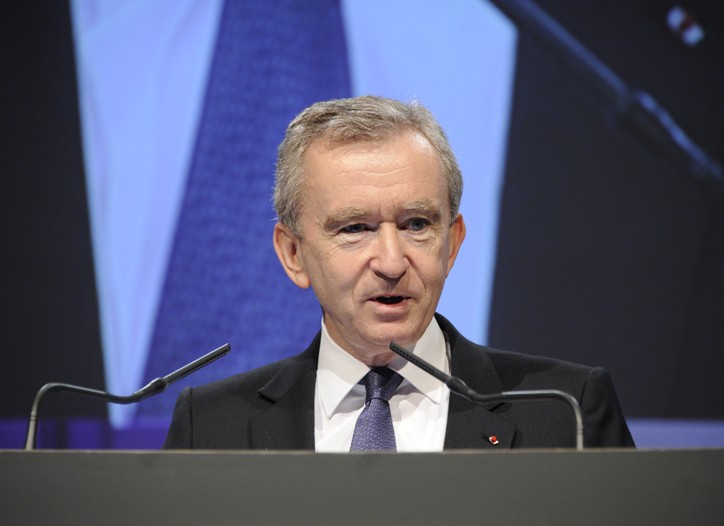 PARIS — A buoyant Bernard Arnault is anticipating another strong year for luxury after an “incredible vintage” in 2010.

Fielding questions at back-to-back shareholders meetings for LVMH Moët Hennessy Louis Vuitton and its parent, Christian Dior SA on Thursday, the luxury titan sounded sanguine about his company and the business climate, as he answered queries about the natural disaster in Japan, and the ouster of Dior’s star couturier John Galliano on the eve of Paris Fashion Week.

“Regarding the entire Japanese business, the impact should be quite limited, in spite of everything,” Arnault told a packed auditorium at the Carrousel de Louvre here.

He noted that the business was particularly affected in the east and north of the island nation, but assured that LVMH would continue to invest in Japan, once an Eldorado for designer labels that has been eclipsed in recent years by the luxury sector’s dramatic growth in China.

“I am confident in the strength of the Japanese people: Their tenacity and their ability to face very difficult situations will help them to emerge very quickly from this terrible crisis,” he said.

Arnault declined to quantify the potential financial impact of Japan’s disaster, but noted the country accounts for only 9 percent of its turnover. Last year, LVMH’s sales in Japan slipped 5 percent amid tepid consumer demand there, with wines and spirits and watches and jewelry the only bright spots.

Arnault noted LVMH counts about 5,000 employees in Japan, all of whom were safe following the earthquake and tsunami and nuclear disaster that ensued.

LVMH donated 500 million yen, or about $6 million at current exchange, to relief efforts in the affected zones, he added.

“We are quite confident in global growth,” Arnault stressed at the LVMH gathering.

He marveled that wine from Château Cheval Blanc, which he owns with Belgian financier Albert Frère, typically sells out before it is shipped, despite prices approaching 600 euros, or $850, a bottle. It speaks to burgeoning wealth in the world, particularly in China. “Economic growth is a phenomenon and I think it will continue like that,” Arnault commented.

Later at the Dior meeting, a shareholder finally popped the lingering question about Dior’s future: Who will succeed Galliano, the disgraced designer who is to stand trial on a charge of public insult later this year, after a glorious 15-year career at the French house?

“Nothing has been decided,” said Arnault, explaining that Dior would see a number of candidates and then reflect on its options — with no specific deadline in mind, and only taking a decision when “conviction” arrives. In the interim, Dior’s design studios would soldier on making collections. “They are effective, creative and accustomed to doing so,” he assured.

“The calendar will be respected,” added Dior chief executive Sidney Toledano, suggesting Dior will not shun the Paris runways, even absent a creative leader.

Told by one shareholder Dior might consider French couturier Jean Paul Gaultier, who recently wrapped up a seven-year stint as the women’s ready-to-wear designer at Hermès, Arnault replied merrily: “I’ll note your suggestion.”

The Dior fashion house logged a solid 2010 as revenues grew 15 percent to 826 million euros, or $1.1 billion, while profits vaulted 169.2 percent to 35 million euros, or $46.5 million. A slide flashed at the meeting showed that Europe and the Middle East accounted for half of Dior’s sales last year, with Asia generating 40 percent and the Americas 10 percent. Like many luxury brands, Dior has been weaning itself off the wholesale channel, which represented only 15 percent of volume last year.

Arnault’s recent investments in Hermès International and Bulgari were key topics at the meetings.

Quizzed about its 20.2 percent stake in Hermès, Arnault reiterated that he supports the family shareholders and management, calling LVMH a “peaceful,” but not “passive” investor.

“We don’t intend to take control of this magnificent company,” he demurred.

Still, he held out hope that its icy relations with Hermès — which publicly views LVMH’s stake building as hostile, even characterizing it as a “rape” — would evolve “in a more constructive manner.”

As for Bulgari, Arnault related that his first brush with the jeweler was about a dozen years ago, but he instantly detected complicity with another family-controlled, entrepreneurial company.

He asserted that LVMH’s decentralized nature, which gives each brand creative autonomy despite strong back-office synergies, might have helped convince the Roman family that LVMH could be a good partner, particularly after it absorbed the powerhouse watch brand Hublot while supporting its charismatic leader, Jean-Claude Biver.

“When shoppers walk down Avenue Montaigne (in Paris), no one knows that Fendi, Celine, Louis Vuitton and Christian Dior, which are all on the same street, are also owned by the same group,” he explained.

That said, “we have the ability to help our various brands develop,” he added.

Despite the recent investments, Arnault said LVMH would continue to funnel funds to its high-potential businesses, especially Louis Vuitton, but also the second-tier brands Loewe and Celine, both of which he noted have now attained the right balance of creativity and management.

Also at the meeting, LVMH added another female face to its leadership, electing MOMA president Marie-Josée Kravis to its board of directors. An economist a prominent philanthropist, she is also the wife of financier Henry Kravis.