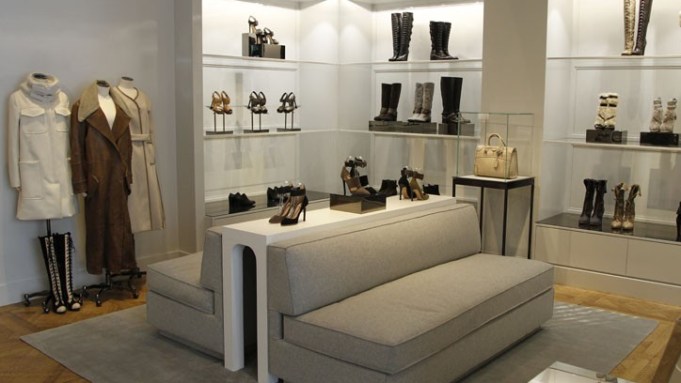 Reed Krakoff is launching his eponymous brand with a major statement — an 1,800-square-foot flagship at 831 Madison Avenue here, just north of 69th Street and across the street from upscale luxury and fashion houses such as Cartier, Gucci and Chloé.

Today, Krakoff officially will open the doors to the boutique, and from the interior to the merchandise, shoppers will be served the brand’s DNA in a clear, succinct manner. The store offers his complete launch collection, from the utilitarian sportswear he presented during New York Fashion Week in February to his luxury leather handbags and shoes, his graphic wood and silver jewelry, the oversize sunglasses and the Swiss-made watches.

It’s not every day a designer can afford to launch a brand with a complete collection of sportswear and accessories as well as retail units in some of the world’s toniest neighborhoods, but Krakoff isn’t your typical fashion newcomer. He is also president and executive creative director of Coach, which owns the Reed Krakoff brand and is funding its growth.

In the past, Krakoff has described his role at Coach as a brand architect, which becomes clear when he discusses his new boutique, which presents a holistic vision of the brand.

“Particularly in the early years, it’s important to control the brand and its message,” Krakoff said. “With the Internet and the constant flow of information, you need to be able to control your destiny and brand imagery, and to be able to try out different things and learn from the experience.”

On an exclusive walk-through on Friday, Krakoff explained he was striving for a balance between architectural elements and a warm sensuality that will make shoppers feel comfortable enough to want to spend time in the store. While Krakoff has an affinity for architecture and industrial design, he deliberately steered away from making it the dominant aspect of the 1,500-square-foot selling space. “Often, stores can be too much about the design, or they can be too residential that it can seem mundane,” he said.

The Prada-owned Miu Miu once occupied this space, but there are no remnants of its previous incarnation. Krakoff worked on the store concept with his wife, Delphine, resulting in a modernist retail environment loosely reminiscent of Le Corbusier’s work.

The designer had the space’s low mezzanine floor removed to open up the space and give it an industrial feel with 15-foot-high ceilings. Structural columns were encased in walls to not distract from the overall design.

Instead of one large open space, Krakoff decided to structure the space with three enfilades, beginning with one dedicated to handbags; another to accessories such as footwear, sunglasses, jewelry and small leather goods, and, in the back of the boutique, a third offering the entire ready-to-wear collection.

The lacquered walls are in a hue Krakoff refers to as the “RK gray,” which is also the color of the boxes and shopping bags. The tone also is echoed in the felt-covered furniture that Delphine Krakoff designed for the store. Louis XVI wood flooring imported from France gives the space a warmth.

“I wanted to create an environment that was sensual and contemporary, without feeling decorated,” he said. “It should be more like an envelope for the collections and the accessories.”

That said, Krakoff couldn’t resist some good industrial design. He asked several designers he admires to create special pieces for the store, which is peppered with a lacquer and acrylic coffee table; sculptural chairs and lamps by Mattia Bonetti; a graphic folding chair that can morph into a table by Ron Arad, and Joris Laarman’s sculptural marble Bone Chaise chair.

Almost taking on a curatorial role, Krakoff plans to showcase pieces from different designers over time, and is already working with Maarten Baas and Christian Astuguevieille on future pieces.

New York is the second store for Krakoff. Late last month, he opened the brand’s first boutique in Tokyo’s trendy Aoyama district, and on Sept. 24, will unveil the third at The Forum Shops at Caesars Palace in Las Vegas.

“There are a lot of things to consider when looking for a store, but you always have a wish list,” Krakoff said. “New York was obviously number one. Tokyo is still very important, not just for the Japanese, but also the Chinese market. Las Vegas is a very different location, and very important with tourists.”

Krakoff knows that despite Coach’s financial prowess, the brand is still in the start-up phase. As reported, Graziano de Boni, who joined Reed Krakoff as president last year, will be leaving the company in mid-November. Krakoff remained coy when asked about a successor. It is understood that a replacement for de Boni will be named soon.

Krakoff didn’t disclose plans for further store openings, and while he has considered several locations, he said he plans to gauge the reaction to the three stores first before committing to new locations. The designer declined to disclose sales projections for the Madison Avenue flagship.

Krakoff’s collection is also being sold at such retailers as Saks Fifth Avenue, Colette in Paris, 10 Corso Como in Milan, Isetan in Japan and Net-a-porter.com, and the designer said he expects to learn a lot more about his customer now that the merchandise is actually available to shoppers.

“You start to see the language of the brand,” Krakoff said. “It’s the combination of telling a consistent brand story, and almost being like a student in your own stores.

“Fashion isn’t a vacuum,” he added. “You need to have that interplay with the women you design for to then go to the next stage. We are just getting started.”