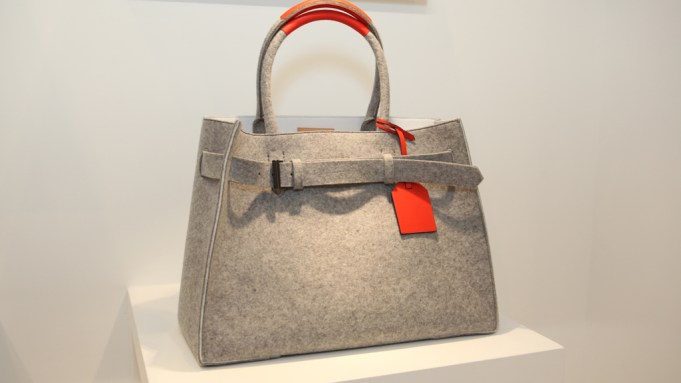 On Thursday, the designer revealed he is suspending operations of his five-year-old brand as the company attempts to “refocus on the accessible luxury segment of the accessories market.”

The news was first reported on WWD.com Thursday afternoon.

In a statement, the brand said “the company will suspend all future design and production, while continuing to operate its Greene Street and Woodbury Commons stores, as well as the reedkrakoff.com e-commerce site. In addition, the company is reviewing all strategic options for the brand, which may include production and distribution partnerships or a sale of the business and the brand.”

The label’s Madison Avenue store will close in the near future — about three weeks, according to sources. Nearly 30 employees will remain with the company to help with the transition.

Another source stressed that the brand still has inventory for its stores and Web site and new products are in the pipeline. The aim is to find a new investor as quickly as possible, the source, who requested anonymity, said.

No liquidation sales are planned, as the brand plans to operate on a typical retail schedule through the summer. A decision regarding fall season merchandise and what will become of Reed Krakoff stores during that shipment window has yet to be made.

WWD first reported instability within Krakoff’s brand in December, when rumors of layoffs and restructuring spread throughout the industry. At the time, a spokesman for the brand said “a restructuring is in process that will shift the primary focus of the brand positioning and product categories.” In early January, the company tapped Harlan Bratcher, formerly president and chief executive officer of A|X Armani Exchange, as ceo.

Krakoff hinted at restructuring at the opening of his Greene Street store during New York Fashion Week in February. Rather than hold a runway show or presentation, he said he would no longer be launching new designs in the typical industry format. He added that a secondary brand concept was in the works and that his current ready-to-wear model and brand ethos were under review.

Krakoff launched his own label in 2010 while he was still working as executive creative director of Coach Inc., which provided initial financial backing of the endeavor and which he and then-chairman and ceo Lew Frankfort propelled into a multibillion-dollar juggernaut that became the leading accessories brand in the U.S.

While rtw was never a critical success, Krakoff naturally found his stride in the accessories category, handbags in particular. Retailers such as Saks Fifth Avenue and Neiman Marcus quickly picked up his handbag offerings (both department stores carry the label and reported a steady performance).

In 2012, Krakoff received the award for Accessory Designer of the Year from the Council of Fashion Designers of America for his own brand. “The idea is really about a new luxury which can mean a lot of different things, but to me is always something that’s about a combination of design credibility, materials and construction,” he told WWD that August in speaking of his company, adding: “The luxury market is really competitive, and you’re competing on design and desire. That’s it. You really need to create something that people fall in love with.”

Krakoff left Coach in April 2013 to focus on his namesake brand. Four months later, in August, he purchased the label from the leather goods megahouse in a buyout deal estimated at $50 million. The designer took the largest stake in the company, while Washington, D.C.-based entrepreneurs Mark Ein and Mitchell Rales and certain funds managed by T. Rowe Price also invested in the brand.

During this time, Krakoff amassed a substantial celebrity following, with fans including Julianne Moore, Allison Williams and Kyra Sedgwick, who frequently sat front row at his runway shows. Arguably the most notable of his followers was First Lady Michelle Obama, who wore the designer on several high-profile occasions, including on the cover of Vogue, in her second official White House portrait and at her husband’s second swearing-in ceremony.

But all the while, Krakoff’s brand appears to have been plagued by retailing woes. The company operated a store in Tokyo’s Aoyama neighborhood while it was still under Coach Inc.’s purview, but that unit closed shortly after Krakoff and his investors took control of the label. In September, the designer told WWD of his big retailing plans: “There are somewhere between 10 and 15 key cities where we will begin to open stores. As those stores open, we’ll start looking at secondary locations.”

At the time, he said a Paris location would open the following month, but it has yet to do so. In the past, Krakoff has also publicly alluded to plans for a Washington, D.C., store, which never materialized.

Beyond the fashion world, Krakoff is widely known for his interest in the art world. In 2012, he created an installation of 99 chairs, titled “Reed Krakoff: One Chair” at Salon 94 in New York; in 2013, “Women in Art: Figures of Influence,” a coffee-table book of his black-and-white portraits, was published by Assouline. Krakoff’s New York stores were laden with tailor-made art including pieces from Memphis Design Group co-founder Ettore Sottsass’ design firm Sottsass Associati. “I see myself in design, but I don’t see myself as a fashion designer,” Krakoff said at a 2014 luncheon where he was honored by the American Federation of Arts. “I have done that for 24 years, but I look at what I do as much more than creating a design, but creating an aesthetic…I guess in a way, I’m more of an auteur than a fashion designer.”