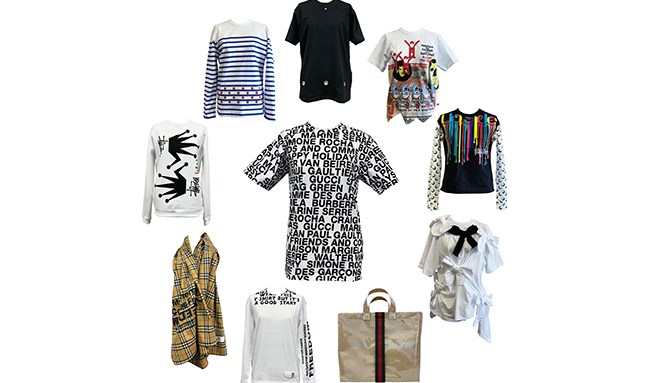 NEW YORK — They don’t call her “the designer’s designer” for nothing.

Rei Kawakubo convinced a fleet of marquee designers — including Gucci’s Alessandro Michele, Burberry’s Riccardo Tisci, Maison Margiela’s John Galliano and couturier Jean Paul Gaultier — to allow her to design a special holiday item, based on a clothing item, accessory or design fragment each submitted. Kawakubo’s only suggestion: something iconic.

The nine items, considered part of Comme des Garçons’ annual holiday campaign, are to go on sale today in Kawakubo’s boutique network in Japan, and then roll out to other Comme des Garçons and Dover Street Market locations on Dec. 6.

The other invitees are Walter Van Beirendonck, Simone Rocha, Craig Green, Marine Serre and Stüssy, telegraphing the range of Kawakubo’s cultural antennae, and her diverse tastes.

“I think it’s more than a bunch of collaborations,” said Adrian Joffe, president of Comme des Garçons International and chief executive at Dover Street Market, adopting the language of the Grinch in characterizing the project as far more than the sum of its parts. “It’s about inclusivity: How people can come together and work together.” (The Grinch ultimately concluded that Christmas, more than just presents, means a little bit more.)

To be sure, only Kawakubo seems capable of diffusing egos and competitive instincts in the pursuit of creative fireworks.

“We have always enjoyed the synergies of CDG-style collaborations, which is not about brainstorming and back-and-forth with the other party but about trust and respect,” Joffe said. “Rei does not enjoy two captains on a ship. So we either leave it to them or ask that they leave it to her. The nine brands were very happy to leave it to her this time.”

Joffe said it’s the “first time ever” that Margiela collaborated with another brand, allowing Kawakubo to play with its iconic AIDS charity T-shirt, reissued each year since 1993.

The Japanese designer took a freewheeling approach to the project, adding red polka dots to Gaultier’s Breton sailor stripes; the slogan “My Energy Comes from my Freedom” across a checkered Burberry scarf; and plastering an array of images from Van Beirendonck’s fashion career over a jagged-hemmed T-shirt.

Stüssy might seem the outlier, but Kawakubo has been toying with streetwear and logos lately, here rendering the California surf originator’s logos topsy-turvy on a crisp white T-shirt. “It’s so cool,” Joffe enthused. “It’s about giving the possibility for accident and synergy.”

Comme des Garçons has created special holiday products for about 20 years at its entire store fleet, adding the Dover Street Market locations when they came on line in 2004.

“The idea behind it is to animate and energize the stores at the end of the season, while people are waiting for the sale and are in the mood for gifts and new things,” Joffe said. “It has been tremendously successful since it brings people back in the stores and they often find things outside the holiday campaign that they might have seen all season, but it suddenly looks different in a different context.”

Past holiday campaigns have yielded Grinch T-shirts, a tie-up with the Disney movie “Frozen” and special products in red, polka dots or tartan.

Joffe said these annual items — priced from about $250 to $500 — tend to be extremely popular, while he skirted around the overused word “drop,” preferring to characterize it as a more generous initiative, in tune with the season.

“It’s a one-off mini collection of holiday products. We make as much as each of our shops orders, no limit. They just go to sell out a month. Nothing is deliberately marketed as limited.”