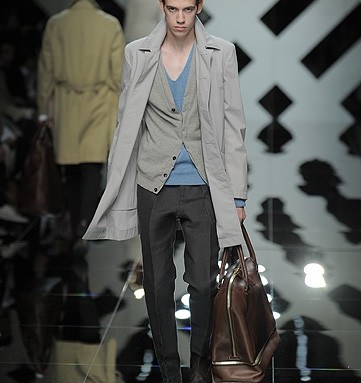 “This was not a ho-hum season,” said Tom Kalenderian of Barneys New York. “I think the designers did an excellent job taking chances. They’re very serious about stimulating business. And creativity is king, because you have to create desire that says ‘I have to have it,’ regardless of price.”

“Everyone was in a positive mood. We just talked about the future, how we can change the way we do business and what products we need to change the business. And all the designers offered that, just by showing much more sportswear, and just with more ease in the fit,” said Tommy Fazio from Neiman Marcus and Bergdorf Goodman.

Prints and classic men’s wear patterns like Prince of Wales or houndstooth made a strong return, while bold reds and deep blues accented an otherwise predominantly gray color palette.

The short double-breasted blazer and trenchcoat were staples in many collections and tailored clothing in general was wrinkled, underlining the relaxed out-of-the-office mood. Trousers were easy-fit, some with tapered legs or more pleats, while mesh and open-weave knits played to transparency and sporty technical fabrications breathed new life into sportswear separates.

In general, retailers frowned upon anything that stepped outside the casual-chic vibe.

“When designers went too bling, adding too many jewels or stones on the outside of garments, it just didn’t feel of-the-moment,” said Richard Johnson of Harvey Nichols.

But the upbeat mood went only so far — buyers said they were working with flat or slightly lower budgets and reducing their mix of vendors, focusing on those that offered something new.

“The new environment challenges us to be uncompromising in our selections.…Editing to those that do it best and offering focused assortments allows our voice of authority to resonate with our customers’ desire for leading style,” said Barbara Atkin from Holt Renfrew.

Here is what buyers had to say about the Milan collections for spring.

Tom Kalenderian, executive vice president and general merchandise manager, men’s and home, Barneys New York: “There were quite a few interesting coincidences. Red is probably the most obvious. Compared to what we saw six months ago, there was a very refreshing variety and combination of color, because neutral is really not the answer. We saw classic men’s wear patterns like Prince of Wales, houndstooth and grisaille, which is used in morning suits, done in modern proportions and combinations. We saw that at Prada and Z Zegna. Also a lot of hand-painted fabrics or painterly designs, which we saw at McQueen, Jil Sander, Moschino, Bottega Veneta. The short double-breasted blazer is by far the single most important tailored model, worn with trousers, jeans and shorts. The trench is absolutely a staple. There’s nautical-inspired, waterproofed outerwear that looks almost American in taste.”

Tommy Fazio, men’s fashion director, Neiman Marcus and Bergdorf Goodman: “It’s really amazing how we’ve transformed men’s from so buttoned-up and tailored into this casual, elegant luxury look. This season, I say, just breathe. And that’s what the clothes are doing. I call it an easy, breezy summer. Most shows had great product. A few high points were Burberry and Etro. Bottega Veneta did the most amazing combination of color, style and trend. [Tomas Maier] was right on every point. Ermenegildo Zegna did a great job of transforming themselves from a tailored company to a modern sportswear brand with a hint of tailoring. They were right on.”

Eric Jennings, vice president, men’s fashion director, Saks Fifth Avenue: “I’m loving what I’m seeing in tailored clothing because it’s innovative and it’s not just for business, and also the slim jacket combined with different dimensions of trousers. I think that’s going to be an interesting way of updating the suit look. I’ve hardly seen any ties, and when I see them, they’re knit, cotton, linen. Actually we did see quite a bit of bow ties. The majority of designers have really done a good job of editing the collections, adjusting prices if necessary and making sure everything is commercially viable. I loved Prada and Etro. Talk about polar opposites, but both did a great job innovating with fabric, color, texture and layering.”

Kevin Harter, vice president of fashion direction, men’s, Bloomingdale’s: “We saw lots of black and gray predominantly, but there were some good bursts of blue and red to bring interest to the sales floor in a masculine way. We noticed a lot of patterns, which is refreshing. Pants are changing quite a bit, getting fuller, as I think designers are being more sensitive to store needs. There was a lot of great classic tailoring using new fabrics. It’s obviously challenging out there, and in order for us to win, our customers still need newness. Consumers are willing to invest in exciting fashion or classics that will be in their wardrobe forever. I really loved the Giorgio Armani show, it was one of the best Armani shows I’ve seen in a few years. Ermenegildo Zegna, with all the great fabrics, Gucci was very glamorous and modern, and I really liked the Varvatos show. I felt he did good pops of color and it was very masculine.”

Barbara Atkin, vice president, fashion direction, Holt Renfrew, Toronto: “It is a time for more considered consumption. The consumer will be buying fewer but better, and the shows in Italy were on target. The new direction brings a focus on creativity, craftsmanship and intelligent design, and an intriguing new approach to mixing casual with formal. Designers in Milan showed us a new way to blur dressing up and dressing down, with an emphasis on items such as the double-breasted blazer and the dress shirt.…Less banker and more ‘Man Friday.’”

Richard Johnson, head of men’s wear buying department, Harvey Nichols: “The mood isn’t about being blatant, rather, products that are very easy to wear and very casual, which feel sophisticated. We really liked McQueen. While we missed having the runway show, the clothes were so full of detail it was nice to see them up close.…Consumers are still willing to pay for really great, really beautiful clothes, but you have to feel that the human hand is involved again and not industrialized. Customers want reassurance that they are buying into individual pieces. There was a very strong aquatic and swimming theme. The Thom Browne partnership was a tremendous show and he communicated his idea very clearly. Checks are very prevalent again. Tom Ford and Thom Browne’s use of it in tailoring trickled out into the wider consciousness of desired looks. The pinstripe suits are a little passé. We need a new direction. There was more innovation in the use of fabrics and color.”

Jason Broderick, buyer for international designerwear, Harrods: “Color featured high on the agenda, [which was] a breath of fresh air after the somber toned neutrals seen for fall ’09.…Back to the carefree Sixties and Seventies was also a prevalent theme with elements of Woodstock Apache-inspired details. There was a new energy and focus this season. It was as though Milan was demonstrating a new beginning and freedom of expression for spring 2010. New hope on the horizon for fashion was visible in the colors, styles and bon vivant attitude to fashion.…It was a very commercial Milan fashion week for us with equal attention on casual and luxe. We are very positive about next spring.”

Tiziana Cardini, fashion director, La Rinascente: Cardini said she realized “how ahead Italians are” in terms of research on materials — “extraordinary and innovative.” Given the economy, it may not be the greatest commercial moment for formalwear, but designers always make a point to include it in their collections, she said. Cardini praised the fact that there are “interesting designs,” and that the “level of the offer has not been lowered.” She cited Zegna designer Alessandro Sartori, Alexander McQueen, Italo Zucchelli at Calvin Klein and Thom Browne at Moncler as examples of designers providing challenging offers from a creative point of view. “They are being courageous, and this is very important in this moment,” she said.

Tancrède de Lalun, general merchandise manager, women’s and men’s apparel, Printemps: “There is no single underlying theme for spring-summer 2010; rather, there is a general return to calm. Silhouettes are much looser, far less strict, less lengthy. Trousers are not as slim, while shoulders are dropped. There are [a] few strong colors but there is a very rich palette of muted tones such as gray, night blue, beige, sand and white. After a difficult season in the store and with creative budgets on the decline, we noted very few risks taken by designers and brands, which instead focused on their origins and brand DNA: Dolce & Gabbana, Jil Sander…all proposed a wearable wardrobe and a style accessible to everyone. Jackets, outerwear and trenchcoats (such as Burberry, Gucci and CP Company) were out in full force, while trousers — many pleated — gained volume.”

Grégoire Proffit, senior buyer, Galeries Lafayette: Proffit said there was a focus on accessories, particularly hats such as derbies, and “a gentlemanly attitude,” which was “simple during the day and vivid” in terms of color at night. Collections were “less bling bling” and consequently “easier to wear, chic and simple.” He cited three-piece fitted suits, trenchcoats, sandals, jackets combined with Bermuda shorts, distressed or easy chic jeans and punched leather jackets as key pieces for the season.

Cindy Ho, fashion and merchandising director, Villa Moda, Kuwait: “Casual looks with embellished details…offer men the chance to have fun and relax. They are real clothes, well designed and with better finishing. The only thing to wait and check is the price point. Bottega Veneta has wonderful choices on coordination with colors, richness on the fabrics. Prada has an unbelievable range of gray in thin jersey, wool, houndstooth and herringbone, and it looks so rich with layers of different gray in fabrics. It is the new black for spring-summer next season.”