The designer would have been tickled pink and green from the outpouring of color at her memorial service that took place in Palm Beach, Fla. 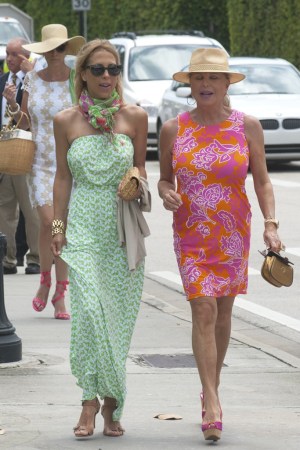 PALM BEACH, Fla. — Lilly Pulitzer Rousseau would have been tickled pink and green from the outpouring of color at her memorial service that took place Thursday at the Episcopal Church of Bethesda-by-the-Sea in Palm Beach, Fla. Rather than classic black, mourners paid homage to the fashion designer known for her sunny disposition by wearing her namesake brand in all its incarnations.

“This isn’t a funeral but a fashion show,” said one member of the packed congregation of local families including the Fanjuls, Lickles, Coniglios, Boardmans, Mercks and Kassatlys.

Palm fronds, hibiscus blossoms and Pulitzer’s other signature tropical prints exploded on sheaths, sport coats and slacks. Women wrapped pink cashmere cardigans and green cable-knit pullovers around their shoulders, and slipped on Jack Rogers and Stephen Bonanno sandals, while men saw it as the perfect excuse to bust out their loudest attire.

Keith Warman, whose wife Casey Orrico co-owns C. Orrico, a Lilly Pulitzer Signature Shop specialty chain based on the island, said he’d been waiting for just the right occasion to dust off a pink-and-green giraffe blazer and palm-printed bow tie. “There was never a question about going any other way,” he said. “You never wore black around her.”

Nancy Noonan, owner of Nancy’s Vintage Warehouse in West Palm Beach, Fla., opted for a vintage Lilly maxidress in a hydrangea print with side slits and white trim. “Unfortunately its matching HotPants are long gone,” she said, estimating her collection 20 years in the making as the largest. “Lilly loved coming by to see her pieces.”

Family friend and local developer David Paladino also went old-school in a citrus-hued, fitted jacket from the Sixties. “I had another by her covered with raccoons and owls, but I gave it to Mitt Romney off my back since he liked it so much,” Paladino said.

After her grandchildren Lilly Leas and Bobby and Christopher Leidy read, son Peter Pulitzer’s eulogy had everyone laughing — just as his mother, a tireless hostess famous for her democratic open-door policy and love of a good party, would have wanted. “There were too many cats, too many dogs, too many people and too many colors, way too many colors,” he said, recalling the exciting cast of characters at breakfast, and her makeovers if guests ever showed up in neutrals. “You couldn’t help but get caught up in her joie de vivre. She taught us how to find that splash of color when we’re low or bored.”