Speakers at her funeral laud her “grace” and “elegance.”

By Miles Socha and Joelle Diderich on November 10, 2011
View Slideshow 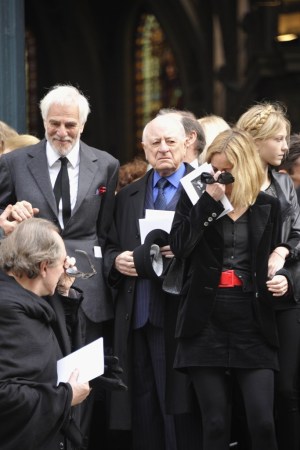 PARIS — “Let there be no doubt: Under the immodest black lace veil hides a little girl who is a real woman.”

Pierre Bergé read those words, written by Yves Saint Laurent, Thursday morning at the funeral of Loulou de la Falaise, the late couturier’s muse and a chief creative collaborator. She died Saturday at age 64 after a long illness.

“She is but multicolored and glittering facets,” Bergé continued.

The funeral was brief and somber, a large black-and-white photo by Jean-Pierre Masclet of de la Falaise — unfathomably chic, puffing on a cigarette —propped on an easel at the front of the church.

Among those attending the service at the Eglise Saint-Roch — where services were held for Saint Laurent in 2008 —were Catherine Deneuve, Betty and François Catroux, Kenzo Takada, Inès de la Fressange and Emanuele Filiberto di Savoia.

Arielle Dombasle, accompanied into the Saint-Roch church by her husband Bernard-Henri Lévy, later mounted the balcony to sing “Pie Jesu,” her voice soaring through the nave.

Klossowski de Rola delivered a poetic eulogy in which he recalled moments of intimacy at their country house in the Vexin region outside of Paris, and described a drawing de la Falaise had given him just before their wedding depicting a little girl and a boy representing the couple.

“My Loulou, did you see those pigeons that were flying above us earlier on?” he said, referring to two birds that fluttered among the stained-glass windows of the Baroque church during the service.

Mitterrand praised her “extraordinary elegance” and her ability to connect people. “One loved you straight away, dear Loulou, from the very first instant, and one loved you forever,” he said.

He recalled a weekend in the countryside during which guests wore disguises, and she appeared as an angel.

“During certain periods of her life, Loulou was in fragile health, and that day she was fragile. That fragile angel was the very image of grace and beauty,” he said. He said that later that day, guests gathered around a fireplace to read poems including Charles Baudelaire’s “The Death of Lovers,” which Mitterrand recited at the church in homage.

De la Falaise was best known for her costume jewelry designs, and inimitable flare with accessories, through her 30-year career at YSL and with the namesake collection she launched in 2003. Mitterrand noted that the key word in accessories is “access,” and de la Falaise gave people access “to art and access to beauty.”

“I admired her for her grace, her elegance and generosity; she was so open minded about everything. She had a luminosity about her,” said Takada as he exited the church. “She was one of the women I loved the most.”