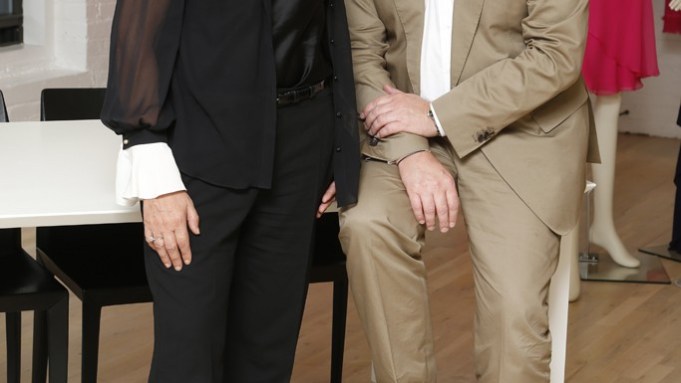 “We want to strengthen the brand again,” Siegmund Rudigier said on a recent trip to New York with his family and new creative director Annick Gorman in tow to present the spring collection. “You have a very strong brand, but it was silent internally over the last four or five years. It was never damaged but silent. We need to get a stronger customer base, and we have to invest in advertising and marketing.”

He and his wife had been eyeing Rena Lange for nearly five years before they were able to secure the deal, terms of which he didn’t disclose. Previously in the hands of the founding family, the Rudigiers bought the brand from Daniel Günthert, who had also been managing director of his family’s fashion house but left after the acquisition.

Since then, the first order of the day has been to work on the collection and refocus it on several core brand values — “superior quality, craftsmanship and a real love for details, materials and fit,” he said. “The collection in former seasons was very big and not really focused, and with Annick, who joined us in January, we are going back to this strong DNA of the brand.”

Spring marks her second collection after resort, and she was inspired by the Fiji islands, from the vibrant colors to tropical floral prints.

Gorman, who divides her time between her Paris home and Rena Lange in Munich, came to the brand with an extensive fashion background. Prior to Rena Lange, she was creative director of L.K. Bennett in London; before that, she was collections director at Jean Louis Scherrer in Paris. She also had senior creative roles at Cacharel, Galeries Lafayette and Céline. “I see the potential to develop the brand internationally,” she said. “I always said it was a sleeping beauty.”

With Gorman on board, the new owners also started to work on accessories, from shoes to bags, with future plans for eyewear and fragrance.

Rena Lange has a total sales volume of 30 million euros, or $38.6 million at current exchange. The U.S. market represents close to 25 percent of the brand’s business, and the collection is available here at 35 Neiman Marcus doors, two Saks Fifth Avenue doors as well as a slew of specialty stores like Shari’s Place in Greenvale, N.Y.

Growing retail is another area of renewed focus. “We have our own retail stores in Germany, in the U.K. and in Austria,” Rudigier said. “We need to expand the retail network. We miss major locations. We would like our own retail store in New York, in Milan and one in Paris.”

Specifically, he added, “We have no presence in China, which is a point we really have to work on. We all know that in, say, five years, 40 percent of luxury sales will be by Chinese in China or by Chinese outside of China.”

Another revenue source will be the Web site, which was relaunched earlier this month and features an online shop available to the U.S. market.

Rena Lange isn’t the only brand expected to benefit from the acquisition. The parent also owns Gloriette, the Vienna shirt company that dates back to 1886, and outerwear company Mabrun. Both are being positioned to expand here through the New York-based U.S. division of Rena Lange, of which Tracy Welch is the president.