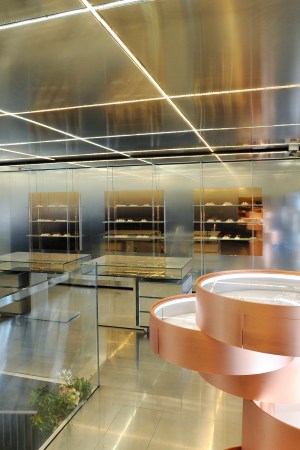 PARIS — Repossi is propelling Place Vendôme into the 21st century.

Repossi, which last year sold a minority stake to LVMH Moët Hennessy Louis Vuitton, inaugurated the store Monday in the presence of Gaia’s father Alberto Repossi, honorary president of the family-owned firm, and Delphine Arnault, a board member of LVMH and second-in-command at Louis Vuitton.

“The concept was to create a statement showcase, but my first idea was really to provide a special experience for customers and for people who visit the store. It could be someone who loves Rem’s work, or someone who likes my jewelry — I’m also passionate about architecture,” Repossi told WWD.

“I wanted to open it up beyond the pure realm of luxury and challenge it and try to propose a new form of classicism, also in terms of the product environment,” she added. “Rem is someone who likes to start from scratch, get people thinking and propose something for the future.”

Ippolito Pestellini, the OMA partner who led the project and is also in charge of the stage design for Prada’s fashion shows and special events, said the store marked a departure for his team.

“It is an investigation into the design of the micro-scale, a rather unusual domain for our architectural practice. Jewelry and architecture are distant relatives. They both investigate the human body, whether it is about housing it or vesting it,” he said.

“With Gaia, we have developed a project that questions conventions through the introduction of unexpected materials and by using architecture as a medium to show, observe and experience jewelry in a multiplicity of new ways,” Pestellini added.

Among the most striking features of the store are the billboard-style walls on the ground floor, which pivot to display glass cases, a mirrored surface or an image, thereby creating three distinct environments. A concrete-and-metal terrazzo staircase links three floors, which all have a distinct use in line with the pricing structure of the brand.

Accordingly, the ground floor is aimed at customers looking to make a quick purchase and can also house temporary displays of high jewelry. The first floor, clad in a Space Age combination of metal and glass, features two arched windows overlooking Place Vendôme and offers the jewelry equivalent of ready-to-wear.

The basement is the V.I.P. area for one-of-a-kind pieces. It features mirrored walls in a coppery gradient tint and a back wall of pink resin. The store is equipped with display units made by Goppion, an Italian company specializing in museum installations, including the case housing the Mona Lisa at the Louvre.

Repossi has curated a selection of Donald Judd furniture for the store and said she fought hard to put her imprint on the space. “Rem, but also Ippollito, really wanted to say a lot of things, and I was always having to put the brakes on the narrative in order to make room also for the narrative of my jewelry,” she said.

She believes the store strikes a balance between a strong architectural statement and her graphic designs. “In its modernity and its simplicity, or aggressiveness, this boutique also conveys a certain sophistication, which we are trying to express in a new way,” Repossi concluded.