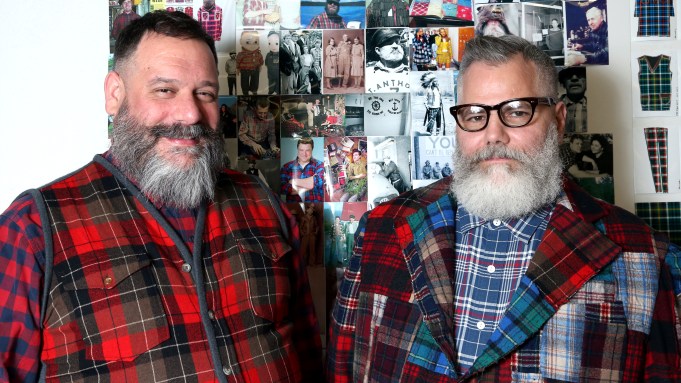 Unmistakable in their signature plaid shirts, Jeffrey Costello and Robert Tagliapietra have relaunched their label as shirt-centric.

Shortly after last February’s Costello Tagliapietra runway show, the pair decided to retreat and regroup after a 10-year run that included two Uniqlo collaborations and two CFDA/Vogue Fashion Fund nominations. Their idea of a breather wasn’t exactly that, considering many days were spent toiling on the alpaca farm that belongs to Tagliapietra’s mother, who was sidelined with a broken femur having been rammed by a ram. Unlikely as all of this sounds, it was in fact true and “actually fun,” according to the good-natured designers. As it turned out, being down on the farm helped to clarify their next incarnation.

“The whole industry is changing so drastically. Culture in general is changing so drastically. For a while, we’ve been privately thinking, ‘What is it that we’re doing? Do we want to keep speaking to the same customer or to broaden this?'” Tagliapietra said. “We’ve always had this duality of fans who were interested in how we were dressing and people who were interested in the dresses we were making.”

Their publicist of 10 years, Kelly Cutrone, linked them up with Resonance’s Lawrence Lenihan, who in July exited FirstMark Capital, the venture capital fund he cofounded. Founded with Joseph Ferrara, Resonance invests in and provides operational support for an assortment of brands including Gaby Basora’s Tucker label, Norisol Ferrari, Tommy John men’s underwear, Lolly Wolly Doodle children’s wear, Body Labs’ three-dimensional body mapping and an assortment of start-ups. “A brand isn’t just manufacturing, having a marketing plan and finding the white spaces. Our job is to find the creators and to enable them with a business that is as strong and powerful as their vision is,” Lenihan said. “What I’m always worried about with the creators is how genuine their vision is.”

A little serendipity sold Lenihan on Costello Tagliapietra’s vision. Out for a Sunday morning run in July in the Westchester woods, Lenihan spotted two men dressed all in plaid walking in the distance. “I was like, ‘Wow, I can’t believe it,’ and then, ‘Holy s–t! It’s these two guys,'” he said with a laugh. “There was no way they knew I was going to be there. There was no way I knew they were going to be there, so it is genuine.”

Seated across from Costello and Tagliapietra in Resonance’s West 28th Street offices, Lenihan said, “Their brand is them — just like with Gaby [Basora.] Tucker is Gabby. It comes from here,” he said, tapping his heart for effect. “And not from market research.”

In the early stage of building bays for the individual companies and a communal area in its 12,000-square-foot space, Resonance aims to partner with seven to 10 new companies each year, all of which will be maintained in its portfolio. “We take equity, we are a partner, we enable their vision,” Lenihan said.

Creating a cross section of companies that assist each other wherever they can, he pointed to Runthrough, a B2B platform that enables brands to express who they are to the media, handle sample requests from stylists and other services, as an example. Anticipating this “next wave of industrial disruption,” Lenihan noted that his experience is in retail and technology, whereas Ferrara specializes in production and manufacturing. “The idea is you can’t just write a check and walk away. You’ve got to create capability. This is about the company that learns the most wins,” he said. “Let’s spend our time on things we don’t know the answer to where you bring advantage.”

In this “time of incredible uncertainty,” Lenihan said, “It’s figuring out how to react and move these companies fast enough, but then create companies that are solid enough to be able to grow and prosper. The biggest problem that this industry faces is that all these companies that you think are successful companies don’t have a business. Our idea is you have to have a business that empowers. Is this a $10 billion business? No, but it doesn’t have to be. This business should be as big as it should be.”

Both from what they described as blue-collar families of tailors, Costello and Tagliapietra wanted to create a more affordable collection, hence the $125 price tag of the shirts and sizing from small to triple-extra-large. In fact, in 1994, they started out making shirts for Bruce Springsteen, Nine Inch Nails and other musicians. “That’s what we love — patternmaking, crafting clothes — and that’s what we’re good at,” Tagliapietra said.

To be more accessible, they will throw a party instead of a show for their relaunch in April, and there are plans to sell at more offbeat places like the Cold Spring Flea Market, as well as more traditional stores.

Their collection includes plenty of plaid women’s and men’s shirts, which will be sold initially on the Costello Tagliapietra site. Nearby, mock-up boards are covered with designs for plaid bicycles, stash bags, dog leashes, men’s boxers and a host of other products, a sign of the brand’s plans to collaborate with other companies. Kiehl’s recruited Tagliapietra to design its plaid gift wrap and in-store illustrations for the holidays. Shortly thereafter, Art Department offered to represent him as an illustrator and he accepted. With 350 proprietary plaids, Costello Tagliapietra will start with five in April, and an additional five or six will be added every couple of months.

With neighbors like Kaufman Franco, Dsquared2 and an increasing number of fashion tenants in the building that used to be home to The Tunnel nightclub, Resonance expects more fashion brands to descend on the neighborhood. “I do think this area of New York is going to become the center of fashion. Hudson Yards is coming in, the High Line has been extended and there is the new subway stop [on 34th Street for the 7 train],” Lenihan said. “If you’re a creator, it’s open, you can think without that oppressive feeling you kind of get in the garment center. It’s also cheaper.”