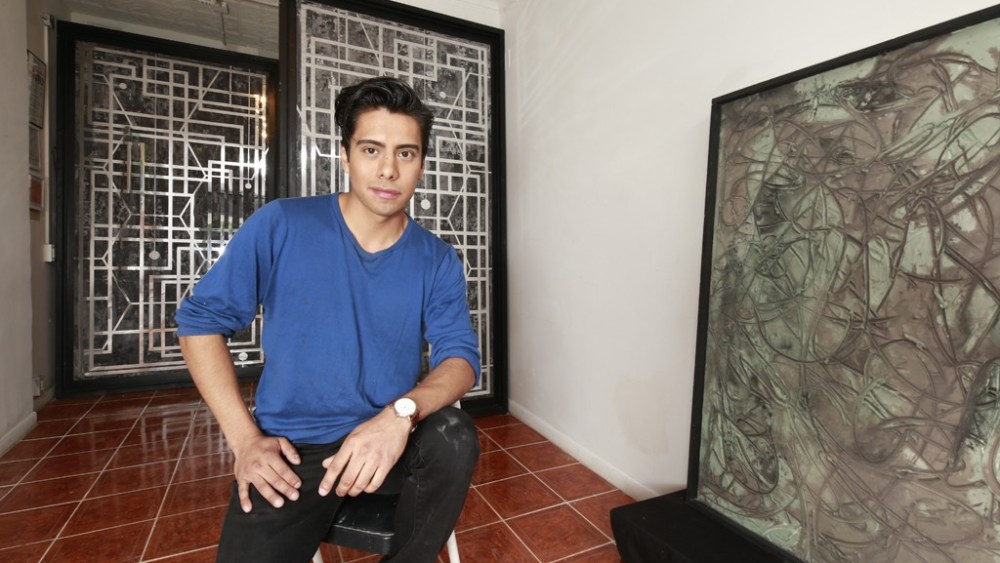 Jonathan Chánduví is on a mission. A third-generation member of an antiques- and art-restoring family that includes metalworkers, sculptors and gilders, Chánduví, 29, who emigrated with his family from Lima, Peru, when he was nine, grew up in the business. He found this legacy both invaluable and burdensome. He absorbed lessons on methods and materials while working as his father’s apprentice, and he was expected to take over the firm himself eventually. His parents live in Connecticut, and his father, Rómulo, is an expert on traditional wood carving. The younger Chánduví, who studied branding at Parsons, worked with the Wadsworth Atheneum in Hartford and on the Du Paquier Vienna Porcelain show at the Metropolitan Museum of Art.

But he was eager to start his own enterprise, so much so that in 2010, after a long visit with his family at his grandparents’ home in Lima, he decided to try to make it on his own. “I needed to know that I had what it took,” he says. “I needed my own dream.” He had a small nest egg, and he decided to check into one of the few remaining hostels in Manhattan, then had cards printed which listed his cell phone number. He didn’t even have an address yet, but through a man who was a manager at the hostel, he got one, in Spanish Harlem. His friend wanted to return to his native Brazil, and he offered Chánduví the chance to take over his lease on a small two-bedroom apartment in a dusty stretch of 108th Street opposite a housing project. He asked his new landlord if he could also take over a unisex hairstyling salon below his apartment, which had been empty for five years, and turn it into an atelier. He named it Studio 323 New York, after its street number, and he now has four employees at Chánduví Restorations who are as young and energetic as he is.

“I like that my clients know that I can work through the night to finish something, if I need to,” he says. “They know I’m busy. It’s not like I’m just hanging out.” His employees seem to enjoy learning the restoration processes, and they like the variety of the projects, which can range from refurbishing an 18th-century armchair to working on a piece of contemporary art.

Chánduví has furnished his apartment and atelier with things bought in thrift shops and found on the street. He engages with the local community, teaching art classes for children and displaying work that his neighbors bring to him. Graffiti artist George “Sen” Morillo was included in the first show at 323 in 2011, and a 2012 project involved filmmaker Adelaide Benatar and artist Gabino Castelán.

At a first meeting with a client, Chánduví — who resembles a Latin heartthrob from Hollywood’s Golden Age, but looks younger than he is — often finds that he’s being underestimated. “But then I show them that I know my stuff,” he says, down to, say, “the size of bug” — cochineal — needed to make a traditional red dye. “Elegant aging” of objects and surfaces is another process he’s familiar with.

“I’m at a point in life that I know how to present myself, and the fact is that I know what I’m doing,” he adds. “And clients get it. They realize, ‘This person has the knowledge, and exactly the materials, to see it through completely.’ [On a long project], I sometimes stay with them a whole month.”

He has restored important paintings; taken delivery of crates of valuable works of art sent from abroad, and done all kinds of antiques restoration. Some of his current assignments involve fabricating artists’ work.

And he can also reproduce many kinds of objects. Not long ago, a client asked him to duplicate a Lucite Art Deco lamp. He had never made one before, but he did some research, and the piece he created looked better than the original. A request to replicate a table base containing an old propeller yielded a similar result. He tries never to turn down a job. Recent clients include Christie’s, Hickey Freeman, the TV series “The Good Wife” and the Kips Bay Showhouse.

Chánduví has rented a space in SoHo, too, and will have a show of his large “paintings,” created using metallic Mylar, plaster and glass, in the fall.