The combination of sartorial with sportswear, a strong Seventies vibe and military inspirations were impressive to retailers attending the men's shows in Milan. 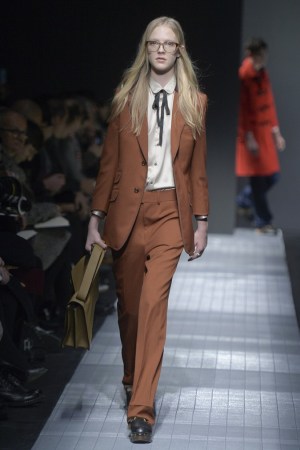 MILAN — The combination of sartorial with sportswear, the reworking of classics, a gender-neutral aesthetic, a strong Seventies vibe and military inspirations were impressive to international retailers attending the recently ended men’s shows in Milan. Gucci’s new direction in the wake of former creative director Frida Giannini’s departure was also given a thumbs-up from generally upbeat buyers, some of whom upped their spending in the city.

Stephen Ayres, head of fashion at Liberty, said overall, he felt a new energy in Milan, praising “a solid range of impressive collections with a real focus on masculinity. It’s usually the more serious of all the cities, but that felt different and more exciting this season. We don’t do a huge business in Milan, but budgets for the brands will be increasing versus last year.” His top shows included Neil Barrett, Bottega Veneta and Marni.

“We are impressed with the enhanced luster in Milan this season. Milan is the centerpiece of a very major market for us, and this season was elegant, inspired and authentic,” said Steven Cook, senior vice president of buying and merchandising at Canada’s Holt Renfrew.

“Standout collections at a number of houses have us revisiting our initial buying plans, with strong showings in particular from Jil Sander, Neil Barrett, Prada and Marcelo Burlon,” he said.

Cook spied newness in pants and a strong offering in outerwear and accessories, notably “fantastic top-handle bags at Fendi.”

Alix Morabito, deputy buying director for men’s wear at Galeries Lafayette, cited a strong “casual influence, with a general softness of feeling” in colors, volumes and fluid silhouettes. Gucci, Prada and Giorgio Armani all offered “genderless dressing” by showing men and women on the catwalk in similar outfits, and Morabito singled out “an unexpected, but exciting and fresh Gucci show, summing up the romanticism and overall softer feeling of the fall collections.”

La Rinascente fashion director Tiziana Cardini also thought Gucci was a highlight, as the show provided “a need for coolness in the city.” She said the collection “energized everyone with a more contemporary, strong image,” underscoring that “daring pays back.” Cardini also “loved” Ermenegildo Zegna’s collection, designed by Stefano Pilati, as well as Bottega Veneta. “This was Pilati’s best effort for the house to date and is the perfect example of how to renovate a storied brand.”

David Witman, executive vice president and general merchandise manager of men’s wear for Nordstrom, defined the most successful collections as “those that took classic fabrics and silhouettes and reimagined them to make them feel new, modern and commercial.” He praised “the simplicity at Prada, the innovation at Neil Barrett and Ermenegildo Zegna, and the reworking of classic ideas at Canali.”

Ken Downing, senior vice president and fashion director at Neiman Marcus, “loved the sensational idea of styling sartorial with sportswear. It was a major message on every runway, it’s updated and relevant to how the customer is dressing today.” Standouts included plaid and tartans “when crafted in the superlative Milanese hand and gorgeous fabrics”; winter whites — “absolute must-haves” — mixed patterns; hooded looks, knits, and the color palette, from camel and green to claret red and burgundy. His favorite collections include Ermenegildo Zegna — “Pilati’s best collection for the brand to date” — Etro, Brioni and Fendi.

Katherine Yoo, head of merchandising at Thecorner.com, said it was “rather fascinating to see how the traditionally masculine man during Milan Fashion Week has somewhat taken a more gender-neutral route, and how a few shows incorporated classically feminine silhouettes and garments. Gucci comes to mind.” Best collections include Neil Barrett, MSGM and Rodolfo Paglialunga’s debut at Jil Sander. Key categories were oversize outerwear; pants, whether ultraskinny or baggy, and backpacks.

Tom Kalenderian, executive vice president and general merchandise manager of men’s wear at Barneys New York, concurred. “The Milan shows were full of rich and beautiful clothes, shoes and accessories.” He cited Brioni, Fendi, Tod’s, Bottega Veneta, Ermenegildo Zegna and Boglioli as top picks. “John Varvatos showed, what felt to me, to be the best [collection] since John launched men’s wear.” He noted that “designer ready-to-wear, streetwear brands, outerwear, sneakers and leather goods are the strongest classifications and a strategic opportunity for growth for fall 2015. The strongest trend messages reinforce the need for new and different accessories for men. Scarves from Fendi with pockets for smartphones or cold weather illustrate the ingenuity of Italian design and their unique way of mixing form and function.”

Joanna Gunn, chief brand officer at Hong Kong-based Lane Crawford, was more cautious. “Milan has been pretty sedate overall. Though there weren’t many standout shows, it still maintained a thread of casual elegance in the collections,” she said, mentioning the use of fur and velvet in tailoring, and the predominant use of military colors. “Overcoats were all over the runway, as well as double-breasted blazers and coats; which we [expect] will perform well for our markets.” Her favorite shows included Neil Barrett, Marcelo Burlon and Moncler Gamme Bleu.

London-based buyers pointed to a stronger energy in Milan. “Brands felt less constrained by heritage and more focused on what men want to wear now,” said Damien Paul, head of men’s wear at Matchesfashion.com. “There’s definitely a renewed energy here — I think adding some new names to the schedule has given the week a jolt.” He said Bottega Veneta was a definite highlight and Jil Sander’s new direction looked promising.

Darren Skey, head of men’s wear fashion buying at Harvey Nichols, said the overriding trend in Milan was military and that, not surprising for fall, coats led the way, with the best coming from Neil Barrett. He also thought Zegna was a standout collection and welcomed Marcelo Burlon, who designs the County of Milan collection, to the calendar.

Jo Harris, general merchandise manager for men’s wear at Harrods, said the big trends her team saw emerging were the “blurring of sports and formal,” as well as the contrast between embellishment at brands such as Dolce & Gabbana and Dsquared2, and the clean lines at Prada.

Eric Jennings, vice president and men’s fashion director at Saks Fifth Avenue, said the hot topic of the season was Gucci. “It was polarizing for sure,” he said, referring to the radical changes at the label’s top managerial and creative posts. “Some people are all for it, others are definitely not into it. But whether you like it or not, it was a bold move. I thought it was refreshing to see a big brand like that take a real risk. It was for sure the riskiest thing of the season — everything else was quite safe,” he observed, lamenting the performance on younger brands, especially. “Those we have been following closely, such as No. 21 and MSGM, did not live up to our expectations. There comes a tipping point where you have to decide, and they just didn’t bring in anything new — and that’s a pity because it’s exactly what Milan needs. But overall, the men’s wear business continues to grow and we will buy accordingly,” he said, listing Canali, Neil Barrett, Versace, Fendi and Ferragamo as his favorites.

Hirofumi Kurino, general manager and chief creative director of Tokyo-based United Arrows Ltd., agreed that there was little energy on the Milanese catwalks this season, but singled out Stella Jean as a positive force. “She brings the culture and artisanship back into fashion. There is storytelling, and it’s very well done,” he said. Pointing to coats, “soft and belted like a robe,” as a key category for fall 2015, he said his team was booked on a trip to Scotland, or “back to the source” as he put it, to stock up on knitwear more than originally planned, following a lackluster Milan season.

Kevin Harter, vice president of men’s fashion direction at Bloomingdale’s, said designers, overall, played it safe and stuck to what they knew best. “They played with their strengths and built on what worked in previous seasons.” He also cited “the statement coat, with a drop-shoulder, interesting textures and lots of shearling,” as the key number for fall, pleased with its strong commercial appeal. “From a retailer’s perspective, this is the kind of thing that sells. Also, the luxury ath-leisure theme has really worked for us, so we will continue proposing it,” he said, forecasting that Bloomingdale’s would likely place “slightly more” orders in Milan compared with the previous winter season. He named Missoni, Etro, Brioni, Canali and Neil Barrett as the big winners.

More upbeat was Jennifer Cuvillier, style director of Le Bon Marché. “Milan is still a key market for men’s and the energy and proposal are strong. When it comes to basics, the Milanese designers are trendsetters,” she said, pointing to Cucinelli, Zegna, Corneliani, Prada and Marni for clues. She said the main message of the season was “comfort and elegance. Cozy and elegant coats as well as warm knits are key items. The men’s wardrobe is subtle and chic; plain, warm colors, which are layered this season, are important and there were no prints. Also the Seventies silhouette is new.”