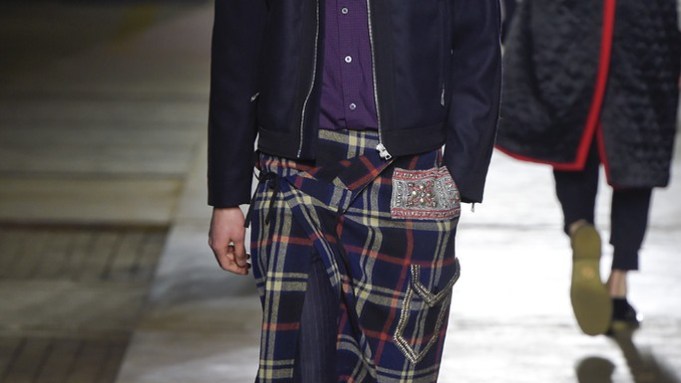 PARIS — Innovative fashion and commercial appeal don’t often sleep in the same bed, yet the recent round of men’s shows here seem to have found a way of having both concepts coexist peacefully, leaving retailers upbeat about the business outlook for fall.

A diverse set of collections drew retailers’ raves, from Givenchy and Dior to Ami and Saint Laurent. Buyers pointed androgynous elements, voluminous coats and pants, and layering as key trends.

Pask pointed to “Junya Watanabe’s inspired take on eveningwear [that] was entirely original and incredibly timely,” while “Sacai was a perfect mixture of texture and tech,” he said.

“Paris remains a source of new and rare collections that inspire with a strong point of view,” noted Tom Kalenderian, executive vice president and general merchandise manager for men at Barneys New York, who said he would spend his money on coats — one of the season’s major focuses.

“[They] were very strong — from shearling to parkas to elegant topcoats inspired by the fluidity of a robe often without buttons and simply a belt closure,” he said, singling out scarves as the most important accessory, “sometimes so oversize they become a substitute for outerwear reminiscent of the ponchos worn in the Andes,” he observed, citing Balmain, Givenchy, Saint Laurent and Loewe among his top picks.

Eric Jennings, vice president and men’s fashion director of Saks Fifth Avenue, said having been grounded in Paris by winter storm Juno turned out to be a “blessing in disguise. We stayed an extra day and it was one of our most productive. The great thing about Paris is, there is a lot of fashion — also off the runways — that pushes boundaries of avant-garde and innovation, yet remains commercially appealing, which is good for our business.”

Still, while European goods are getting cheaper by the day as the euro weakens against many major currencies, it doesn’t mean that his purchase list is getting longer. “True, the weak euro was the number one topic in Milan, but in Paris it’s not about the price point, it’s about fashion,” he noted.

“Paris gives direction that no other city in the world can give. Our minds are opened in Paris, and so are our wallets,” said Jeffrey Kalinsky, executive vice president of designer merchandising at Nordstrom, while Stephen Ayres, head of fashion buying and merchandising at Liberty, said that overall, the retailer’s budgets would be increased.

“Paris is where we spend the majority of our budgets, and I was not disappointed,” he said, pointing to Valentino, Dries Van Noten and Thom Browne. “The movement in the euro means that prices are coming down, which is great news for us and the end-consumer.”

Josh Peskowitz, men’s fashion director at Bloomingdale’s, observed that although a weaker euro “is very favorable right now and that will be helpful with buying goods, Bloomingdale’s is known worldwide, with a very large tourist clientele — in no small part from Europe — so it’s really a double-edged sword.”

Alix Morabito, deputy director of the men’s department at Galeries Lafayette, said the shows dispelled fears the terrorist attacks would cast a pall over the Paris season. “I thought there was a very good energy,” she said, singling out Junya Watanabe for refreshing men’s wear staples.

Galeries Lafayette is revamping its men’s assortment and has strong growth targets for the segment in the coming seasons. “We are going to put the spotlight back on men,” she said.

Darren Skey, head of men’s wear fashion buying at Harvey Nichols, said the Paris market has grown in importance in the past few seasons. “This is due to the creativity which is coming from the Parisian shows. We have certainly realigned our mix between Milan and Paris,” he said.

Tiziana Cardini, La Rinascente fashion director, listed Pigalle, Off-White and Kostas Murkudis among the hot young brands on the calendar. “Juun.J is definitely on the rise, too,” said Cardini, noting that the Paris collections were “provocative and inspiring.” “Genderless style was a major trend across the most directional collections, where the look was young, elegant and a bit feminized,” she observed.

Following strong growth in men’s wear, which has been outpacing his women’s business in the past seasons, Emmanuel de Bayser cofounder and head buyer for The Corner, noted the men’s segment has finally found its own pace. “We have entered a period of consolidation. Sales in men’s are still increasing, but only by 10 percent, while women’s is growing at 15 percent,” he said, citing Givenchy as the number-one brand for men.

Overall, he thought the Paris season was darker and more structured, and was happy with the strength of outerwear this season. “I can tell you from a business perspective: a well-cut coat never gets left behind. We are in direct competition with fast-fashion retailers, who can easily copy a T-shirt or sweater, but a good coat will always be different.”

men’s wear at Matchesfashion.com, said “it felt like a really strong season commercially — all of the best collections were grounded in wearability over runway gimmicks. Ami was great for exactly that reason — the clothes had a real life beyond the catwalk.”

“There was a lot of energy in Paris and the collections had a stronger point of view,” observed Joanna Gunn, chief brand officer at Hong Kong-based Lane Crawford. “A lot of them offered voluminous shapes, luxurious and interesting fabrics, and strong color accents.”

Ahmet Ocal, buying director, men’s merchandise group for Turkey’s Beymen, lauded Paris as a capital of the “revolution in men’s wear in the last few years in terms of creativity and bravery. Brands like Givenchy, Balmain, Valentino and Saint Laurent are leading the city with their strong silhouettes.”

Ocal said Beymen had a “fantastic year” in men’s wear in 2014 and is forecasting “important growth” this year. His favorites were Saint Laurent, Givenchy, Balmain and Valentino, with Tim Coppens and Wooyoungmi among new discoveries.

Bold coats and shearlings; rich reds and greens; lug-soled shoes; chunky turtlenecks and backpacks were among the key items Downing mentioned, his favorite collections being Valentino, Givenchy and Saint Laurent.

Nelson Mui, men’s fashion director at Hudson’s Bay Co., said Paris has become the “epicenter of advanced luxury and advanced contemporary, and you see that at the legacy maisons, with the conceptual designers, as well as all the new wave of brands such as Ami, Carven, Melinda Gloss, etc.”

Mui said that the weak euro “certainly helps make things more attractive and stretches our open-to-buy for the season,” while noting that the Canadian dollar’s rise has not been as strong as the American’s.

Steven Cook, Holt Renfrew’s senior vice president, buying and merchandising, said the Canadian retailer would continue to “take an elevated position with our men’s wear” on the back of a designer business that is exceeding expectations. “The world of leather goods and footwear are a large growth opportunity, and we’ll continue to make significant investments here.”

Jo Harris, general merchandise manager for men’s wear at Harrods, said: “Whilst sneakers remain an important business for us, we loved the rubber sole shoes at Berluti as well as the functional mountaineering styles seen across designer brands such as Balenciaga and 3.1 Phillip Lim.

“It’s an exciting time for men’s wear; the consumer is generally much more confident and knows what he wants,” she added. “We have seen a surge of interest in key fashion brands and continue to see the strong focus on both designer and contemporary brands, much like we saw in women’s wear several seasons ago.”

Jennifer Cuvillier, style director at Le Bon Marché in Paris, singled out layers and outerwear; warm colors in beautiful materials, and a fresh take on eveningwear. Her favorites were Dior, Lanvin, Valentino, Raf Simons and Thom Browne. “Paris was very strong this season for men’s, with beautiful and creative silhouettes,” she said.