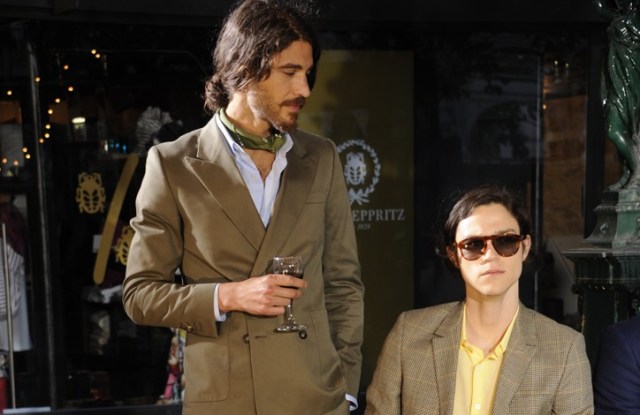 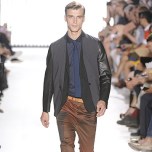 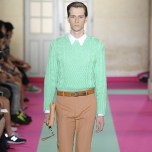 Men’s wear is one of the brightest spots at retail this year — and what buyers saw in Milan and Paris for spring 2012 fueled optimism that the good times should keep on rolling.

Men’s apparel sales led other categories during holiday and spring and the momentum continued through Father’s Day when many retailers reported double-digit gains with strength in everything from suits and dress shirts to lightweight sweaters and casual shirts. The optimism spilled over to Europe, where retailers shopping for next year were upbeat and hopeful that the strength will continue into next year.

Enticing color, innovative fabrics and creative newcomers were among the highlights of the Paris men’s wear collections, which ended here Sunday and followed a strong season of shows in Milan.

Though attendance was slightly lower than in Milan, as many buyers and senior executives remained in Italy to complete order-writing sessions, Paris boasted high-impact collections both on and off the catwalk.

“There was this understated elegance in most of the collections with the juxtaposition of fantastic energy on the runway,” said Kevin Harter, vice president of fashion direction for men’s at Bloomingdale’s.

Among the most praised collections were Lanvin, Dries Van Noten, Givenchy, Paul Smith, Maison Martin Margiela, Acne and Carven, which made its men’s wear debut this season.

Budgets increased across the board, with buyers seeing good potential for lightweight jackets, linen knits, color and prints, and looser pants. Stores generally have seen their men’s business growing by double-digits, fueled by a customer who is more fashion savvy, a more relaxed attitude toward dressing and the beginnings of an economic recovery.

Here is what buyers had to say about the Paris season:

Stephen Ayres, head of men’s wear buying, Liberty, London
Trendspotting: “I really liked the use of clashing colors. Acne epitomized this by showing a palette that really shouldn’t work together, but did.”
Sound off: “Prices from a lot of brands have gone up but this is across the board. This, combined with a weak pound, is concerning.”

Gérald Tesson, creative director for men’s wear buying, Le Bon Marché, Paris
Trendspotting: “There were a lot of very lightweight semilined or cotton jackets which we think are going to do well. Everybody has been inspired by Prada’s thick-soled shoes.”
Sound off: “It’s becoming a little complicated juggling our timetable to include attending fashion shows and checking out more creative and accessible brands at the trade shows, in addition to buying appointments in showrooms.”

Grégoire Proffit, designer and casual men’s wear buyer, Galeries Lafayette, Paris
Trendspotting: “Dior-style minimalism, nature [with green and floral inspirations] and water effects with bright blue shades that are almost electric. In terms of products, the most saleable items remain suits and tuxedos.”
Sound off: “The pace is very fast between shows, showroom presentations and buying appointments for international buyers. We have to be well organized.”

Tancrède de Lalun, merchandise manager for men’s and women’s wear, Printemps, Paris
Trendspotting: “Pants are definitely no longer fitted. Outerwear is almost technical, and we are seeing ethnic inspiration with ikat-like fabrics.”
Sound off: “We liked the fact that there was a new energy in Paris with brands that don’t necessarily show on the runway, like Ami and Carven.”

John Gerhardt, creative director, Holt Renfrew, Canada
Trendspotting: “The double-breasted sport jacket, the summer parka, the four-pocket jacket, the bomber jacket, the colored pant, the Bermuda short, the band-collar shirt and the pleated pant.”
Sound off: “We have a heavy investment in our sportswear assortment and with this season’s overriding theme of casual elegance, we know we will have a very successful season.”

Eric Jennings, vice president and fashion director, men’s wear, home, gifts and food, Saks Fifth Avenue, New York
Trendspotting: “There was this fantastic shade of blue, somewhere between French blue and royal blue, that kept popping up over and over. Second, there were amazing prints this season, from tropical to geometric to ethnic. Last, the textured, mélange colored knits from fall continued into spring, now in lightweight, fine-gauge yarns.”
Sound off: “One of the things that I love in Paris is seeing more designers from Japan and Korea. I think they are tremendously inspirational and directional right now.”

Jason Broderick, menswear general merchandise manager, Harrods, London
Trendspotting: “There was a very feminine approach from some designers such as Thom Browne, Yves Saint Laurent and Lanvin drawing inspiration from women’s wear, but this new look translates well to sportswear.”
Sound off: “The collections were better in the showroom in some cases. The brands are pushing commerciality and restricting the super fashionable looks to the catwalk.”

Anita Barr, director of men’s wear, Selfridges, London
Trendspotting: “We saw really strong tailoring, and it was mix-and-match, such as double- and single-breasted jackets with an ankle-length trouser. There was a strong sports luxe feel. There was an undercurrent of surf, with Givenchy’s bird of paradise print and also off the runways, with a lot of guys wearing Hawaiian shirts. Color is still key and it responds really well for us at retail.”