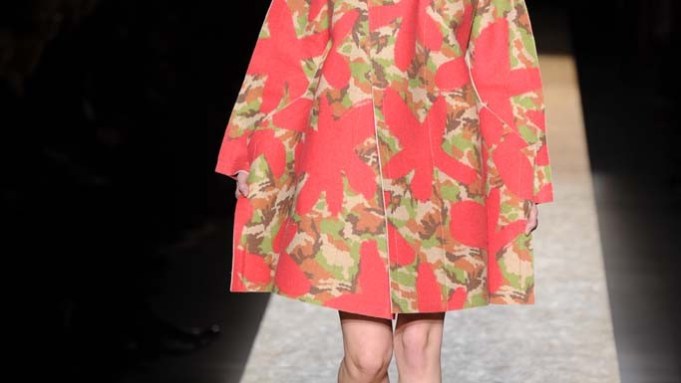 Cindy Ho, fashion director, 360 Style, Kuwait: “Comme des Garçons. The idea of 2-D, and freedom on the shape and color choices, is a breakthrough of fashion in this decade.”

Sarah Rutson, fashion director, Lane Crawford, Hong Kong: “Altuzarra. Joseph has been really hitting his stride in the last few seasons. A stunning ‘culture clash,’ from the duffle coats, reefer jackets to the ‘pony’ knits worn over silky cargo pants or a skirt slit to the thigh—all with overtones of the sound of Moroccan coins literally ringing in the ears like a chant.”

Colleen Sherin, senior fashion director, Saks Fifth Avenue: “Marc Jacobs. From the stage set to the music to the styling with the incredible fur hats by Stephen Jones, Marc gave us a preview of what would become the big ideas of the season: layering, decorative fabrications and embellishments.”

Nicole Fischelis, Macy’s group vice president and fashion director: “Marc Jacobs. It was an amazing mood of poetry and whimsy. The whole cutout castle in white, the models coming down the runway with extravagant hats and the clothes were all layered with vintage inspiration. It was about individualism, poetry and craft, [and] charming, desirable clothes.”

Ken Downing, senior vice president and fashion director of Neiman Marcus: “Haider Ackermann. I love the poetic sensuality, the sinuous lines and his brilliant color mix that continues to captivate in a very magical way that makes fashion something the we crave.”

Linda Fargo, senior vice president of the fashion office and store presentation, Bergdorf Goodman: “Alexander McQueen. It was the most sublime moment when Sarah Burton sent out what felt like a new feminine hybrid species: part human, part nature and all astonishingly, heartbreakingly beautiful.”

Daniella Vitale, executive vice president and chief merchant at Barneys New York: “Proenza Schouler presented such an invigorating, thought-provoking, highly-stylized collection, which will stay with me for a long time.”

Jeffrey Kalinsky, executive vice president, designer merchandising, Nordstrom: “Celine. What I loved about this collection was that it was so simple. Phoebe Philo did this cropped pant. I wouldn’t call them full, but the lines on the pants were very special and particular. [Pair] pants like that with one of her knits, and her fabulous pointy-toed shoes—I would turn around when that woman walked into a room.”

Ed Burstell, managing director, Liberty of London: “The return of Miguel Adrover. Showing again in New York City for the first time in eight years, he returned to the scene of his original fame: Teatro Latea on the Lower East Side. No one has his type of unbridled creativity with a resounding middle finger up to the commercialization of fashion. He combined influences from hip-hop, street, couture, costume, global references and nature.”

Stephanie Solomon, vice president of fashion direction at Bloomingdale’s: “Raf Simons, because of the ultimate femininity and romance of that [Jil Sander] show.”

Barbara Atkin, vice president, fashion direction at Holt Renfrew, Canada: “Stella McCartney. Coats were a standout, particularly one in the color of the season, bright cobalt blue. The new pantsuit with an oversize jacket and fuller pants looked modern and the sexy fabric-blocked dresses with long sleeves and tulip hemlines ended the show on an upbeat note with an eye to the upcoming Olympics.”

Régine Béraud, director of women’s fashion style, Le Bon Marché, Paris: “Givenchy. Riccardo Tisci is really in the big leagues. I loved the hyper-sophisticated jodhpurs worn with knee-high boots, and the evening wear was very strong—that whole Calamity Jane look, with dresses with jeweled straps, was lovely and hyper-feminine. Also the lace insets, and I loved the color combinations, like light turquoise with orange.”

Sarah Easley and Beth Buccini, co-owners, Kirna Zabête: “We found Givenchy to be the most exciting directional show. Riccardo [Tisci]’s mix of feminine lingerie-inspired dresses in power purple and red were a season standout. The avant-garde pant and skirt trains and peplums and sleek leather detailed capes made for such a strong, but real new mood.”

John Schofield, head of fashion buying and merchandising, Harvey Nichols, London: “Mary Katrantzou. The prints, as always, were amazing and silhouettes were very dramatic, especially the clouds of chiffon. It was incredible how she got the patterns to match, [and] flatter a woman’s body.”

Ruth Runberg, buying director, Browns, London: “My favorite was Muscovite Vika Gazinskaya’s meticulously finished collection of rich brocades styled back to chic, bejeweled sweatshirts. I fell in love with the collection and with Vika herself, who is as lovely and talented as her designs are beautiful.”

Liliane Jossua, founder, Montaigne Market, Paris: “Without contest, Azzedine Alaïa. He is extraordinarily chic and precise in his cuts, and his collection is resolutely fashionable at the same time. These clothes are very feminine, chic and timeless and they are a long-term investment. He is an absolute master in every respect.”