Riccardo Tisci Opens Up About Givenchy Opening to the Public

Fresh on the heels of opening a shiny flagship on Madison Avenue, Givenchy will show spring 2016 in New York — and the public is invited. 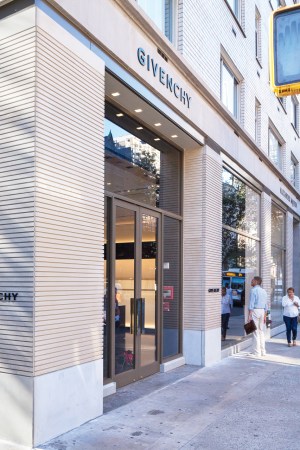 New York’s huddled fashion masses are brimming with hope. Hope for a seat at the upcoming Givenchy event after news broke on Monday night that the house will open the golden door of its spring 2016 show to 1,200 of the most unusual suspects — non-industry, civilian members of the public.

“Opening to the public was my dream for many, many years,” says creative director Riccardo Tisci on Tuesday. Just back from holiday (and recovery from a diving-induced ear infection) and newly re-immersed in his collection prep, Tisci took a break for a long-distance phone call.

Having a significant general-public contingent in the audience became an essential element almost as soon as the decision was made in June to accept the CFDA’s invitation to show in New York. The move embraces much that Tisci’s Givenchy stands for, combining the designer’s penchant for contrast — more typically applied to sartorial élan than audience demographics — and populist engagement in high fashion. Eight-hundred-twenty tickets will be distributed first-come/first-served via registration on the dedicated Web site, givenchynyfw15.com as of 10 a.m. today. Chances are most will go to young people not in the market for a $29,500 jacket such as the exquisite, discreetly flamboyant military-inspired specimen now hanging in its just-opened New York store. In a savvy community relations ploy, an additional 100 tickets have been reserved for residents living near the still-undisclosed outdoor show site, distribution details to be announced. And 280 tickets will go to students and faculty of local fashion schools.

The topic of public access leads Tisci into a reverie of sorts, one that begins with his now-familiar story of growing up as the youngest of nine and the only son in “a normal family,” loving but poor after the death of his father, with the dream “to be a part of this moment that was the runway.” Years later, “God gave me this beautiful karma and I was blessed in this fashion world to arrive at Givenchy.” Becoming comfortable in his role there and ultimately ascending to the highest level of influence, he became his youthful dream in the eyes of kids he’d meet on the streets and in clubs. Likenesses of his former self, they longed to see one of his shows. “So that puts me back in the past,” Tisci says. “You know, fashion is amazing and very exclusive. But [I’ve long thought] one day I would love to do a show where anybody — which is the reality — could be a part of it.”

New York was a logical place. Givenchy’s connections with the city run deep. Personally, Tisci loves New York for itself and because long ago it provided a romantic beacon to an Italian family of modest means. “My father died when I was a baby, but my mom always said to me that my father would always say to her, ‘one day I will take you to the Big Apple.’ It never happened,” he says. “So in my blood, in my dream, in my thoughts, has always been this: ‘I’m the only boy of the family. One day I will bring my mom to America.’ And I did, I did a few years ago when I won the CFDA [International Award].”

Tisci reveals that the show will take place on the street — he’s careful not to name which one — and that there will be simulcast screenings at various outposts around Manhattan. The show will also have an art component, produced in collaboration with his longtime friend — “and second mother,” he adds — Marina Abramovic.

One of the most influential designers in the world, Tisci produces work that awes. His runways are collisions of dissonant elements that contrast, conflict and contort, ultimately fusing into powerful statements of major fashion with an undercurrent of dark romance. Case in point: his arresting fall collection in which he played chola bravado against Victorian romance. It’s one of the inaugural collections carried in the New York flagship that opened on Madison Avenue last week, and the Milan store set to open on Sept. 11, the day of the show.

The store provides a chic, restrained backdrop to such drama, designed around a gallery concept with long, sleek islands replacing shelving for accessories display and large photos suspended from the ceiling — at least right now. For the store’s opening, campaign photos command the space — a giant Donatella Versace greets arriving guests. But chief executive officer Philippe Fortunato notes an intended flexibility. “Today there are these pictures,” he says during a walk-through. He was in New York to check on the store and hammer out show details with the City of New York. “Tomorrow, it could be real art; it could be anything…a piece of art that’s enhancing that relationship between the brand and artist, between the gallery and the retail environment.”

An LVMH Moët Hennessy Louis Vuitton executive for some 15 years starting out at Dior as managing director for the Asia-Pacific region, Fortunato took the helm at Givenchy last September, after Sebastian Suhl decamped to Marc Jacobs. Fortunato seems well-suited to Tisci’s Givenchy with its moody, artful emotion yet with an increasing integration of elements addressing pragmatic wardrobe needs. At the store he voices appreciation for Tisci’s effusive creativity while explaining its logical ordering for retail, the first-floor women’s area segmented into distinct sections addressing the most classic customer, the social/red carpet element and the runway customer. The men’s area upstairs on the mezzanine, covered in pale green subway tiles, has a tighter range of merchandise, addressing as it does a narrower customer base — younger and more fashion-forward.

“I love to say that it’s about mixing the logic and the magic,” Fortunato says. “You need to have the magic in everything you see, but behind everything there is a very strong discipline.”

And there’s nothing wrong with a little luck. While the store is primarily white and sleek black lacquer, the payment counter is a deeply burnished mirror in the universal color of wealth. Fortunato calls it “the golden nugget and a symbol of luck and prosperity.” He takes the moment to reference Tisci’s belief in divine guidance “giving him the drive and protection he needs” and to draw parallels between the designer and house founder — an interesting comparison given that Tisci’s high-concept, high-impact runways don’t link back in any obvious way to the LBD-clad Audrey Hepburn imagery of Hubert de Givenchy’s heyday.

Just as Tisci has utilized symbols and charms in his work, so, too, did Givenchy, who devoted an early couture collection to lucky charms — four-leaf clovers, fish bones, horseshoes. “That is a very interesting element that is very true to our brand,” Fortunato says. “You have a lot of similarities like that.”

Among the biggest: smart utilization of the popular culture for marketing purposes. While Tisci’s celebrity connections, his tribe and his savvy use of social media are well-known, Fortunato argues that Givenchy was no slouch in the marketing department himself, taking a time-adjusted approach not all that different than Tisci’s. Then as now, and “whether we like it or don’t like it,” famous actresses were influencers, Fortunato argues. “Givenchy was a visionary when he used the social network of his time, which was Hollywood movies. There was no [better] way to reach out to millions than to be successful making [fashion] visible in Hollywood. Riccardo is doing the same, using the facets of the 21st century. He’s doing it with movies, with music, with social networks.”

The designers also share a deep appreciation for American culture, reflected in their work. Fortunato cites a formal White House portrait of Jackie Kennedy that he came across while doing research before taking the Givenchy job. She’s wearing a blouse with a soft, generous bow that indicates Givenchy’s dedication to providing women the freedom to dress in separates. Tisci, he notes, pushes that freedom exponentially. France has the savoir faire, the history and the craftsmanship to create the world’s best fashion; it lacks the diverse street culture and aesthetics intrinsic to the U.S. from which Tisci draws continually in his work.

Both designer and ceo considered the decision to show in New York a no-brainer, particularly on the heels of the long-planned store opening, As for the date of Sept. 11 assigned by the CFDA, for a first-time guest showing during NYFW, its aura couldn’t be ignored.

For his part, perhaps taken with the historical sentiment, Fortunato waxes emotional about Givenchy’s American ties and the more general yet personal resonance of the post-war connection still felt in Italian households of his youth. “First, we don’t forget that they came and liberated Europe. That’s something that we grew up with very strongly,” he says. “Two, many Italian families migrated to the U.S. Some made it in a big way, some didn’t. Some came through Ellis Island. That is very important. The other thing that is very important to us is the American dream. It may sound common, but you don’t have many places in the world with the sense that nothing is impossible — that’s very strongly associated with American society.”

If that’s the romantic side — the aforementioned magic of Fortunato’s equation — there’s plenty of logic at play as well. “I think the stars were aligned,” Fortunato says. “The house’s fascination with the American market…the store creating a reason to celebrate…the fact that we were invited by the CFDA, and the fact that we are ready to come up with a more structured presentation of the house, a better balance between the work of Riccardo and the business image, it all gives us the confidence to project ourselves outside of our boundaries.”

Lest you just winced — oh God, Tisci’s coming to New York to turn commercial on the runway — exhale! He offers a firm “Absolutely not!” when asked if he altered his design process for the New York venue. “I’ve built my identity over 10 years at Givenchy,” he offers. “Like any other creative person or designer it took me a long time because there’s so much fashion out there. I think today what is successful in fashion — not only in fashion, but anything, in society, in music — is identity. People need identity.”

While multiple nuanced facets comprise his Givenchy identity, one of the most powerful is a strong, often dark romanticism. Spring may prove his most romantic effort yet, with an undercurrent inspired by the date. “On this day, what I’m trying to achieve is literally a celebration of love,” he says. “Everybody has one thing in common, it’s love. Love is free, it’s for rich people, it’s for poor people. Love is love. Something so natural, so real. That is my point for today. I hope people are going to receive it in a very positive way.”

And with all of the emotion inherent in that message. “The moment I don’t have emotion anymore, I will stop my job,” Tisci says. “Because what I like is to get emotion from people and give emotion to people.”