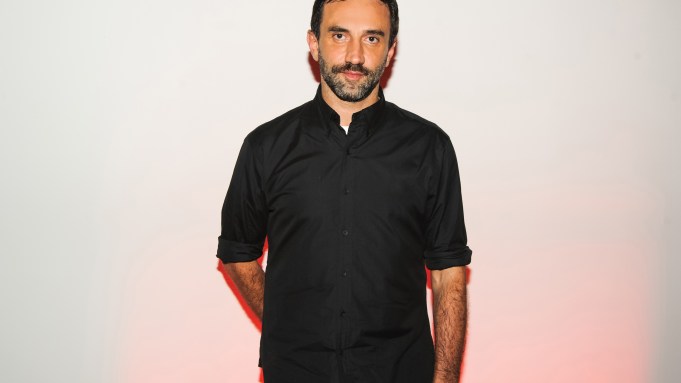 Riccardo Tisci, who revved up and reinvented Givenchy in his own edgy image, has exited the French house after an electrifying 12-year tenure.

The French couture house confirmed his departure exclusively to WWD, noting that his last collections were fall men’s wear and spring couture, which were paraded together at the National Library of France in Paris on Jan. 20.

Sources described the parting as mutual and amicable, the separation effective Jan. 31 following the expiration of his latest employment agreement.

Tisci’s departure is sure to intensify speculation he is heading to Versace.

WWD broke the news on Jan. 19 that the Milan-based house has been chasing Tisci, who has long expressed his admiration for the work of the late Gianni Versace and cultivated a close friendship with his sister Donatella, whom he invited to pose in a Givenchy ad campaign in 2015.

In light of Tisci’s departure, Givenchy will not stage a runway show on March 5 during Paris Fashion Week.

It is understood the fall women’s collection will be designed by the studio and sold to retailers in Givenchy’s Paris showroom as usual.

The format for presenting the collection to the press has yet to be determined.

Givenchy’s ateliers are also working on some of Tisci’s final designs as sources told WWD that he has lined up stars to wear custom couture outfits at the Grammy Awards on Feb. 12 and the Academy Awards on Feb. 26.

Celebrities in Tisci’s orbit include the likes of Meryl Streep, Beyoncé (who on Wednesday revealed she and her husband Jay Z are expecting twins), Julia Roberts, Cate Blanchett, Ciara and Kanye West.

Givenchy did not provide any timelines for naming a successor and declined all comment on potential candidates.

Tisci’s exit is the latest tremor as creative upheaval spreads through the top ranks of international fashion.

As Givenchy draws up its list of potential candidates, it could draw on such well-known designers on the market as Hedi Slimane, Alber Elbaz, Peter Dundas, Clare Waight Keller, Rodolfo Paglialunga and Peter Copping. Buzzy designers like Balmain’s Olivier Rousteing could also be on its radar.

“The chapter Riccardo Tisci has written with the house of Givenchy over the last 12 years represents an incredible vision to sustain its continuous success, and I would like to warmly thank him for his core contribution to the house’s development.”

For his part, Tisci said, “I have very special affection for the House of Givenchy and its beautiful teams. I want to thank the LVMH Group and Monsieur Bernard Arnault for giving me the platform to express my creativity over the years. I now wish to focus on my personal interests and passions.”

A bundle of creative energy forever shod in Nike sneakers, Tisci was a daring, uncharacteristic hire for LVMH, which has a track record of casting media stars to helm its fashion brands, which also include Fendi, Céline, Kenzo, Loewe and Pucci.

Tisci was relatively unknown, and just 30, when he was recruited by then Givenchy ceo Marco Gobbetti, who is to assume the management helm of Burberry later this year.

Tisci succeeded a string of designers who, to varying degrees, encountered some bumps on the road to brand rejuvenation following the 1995 retirement of founder Hubert de Givenchy.

After a brief stint by John Galliano, who moved on to Dior, Alexander McQueen tried his hand. But his eclectic collections — space aliens one season, rockabilly the next — failed to galvanize the house. Next up was Julien Macdonald, who went back to a style rooted in French elegance and sophistication, but did not win much acclaim.

Tisci brought stability — and heat — to the storied name, immediately making inroads with the world’s leading specialty stores and spawning a series of hit leather goods, kicking off with the Nightingale bag.

He took on design duties for men’s wear three years later, and helped ignite the streetwear trend with his T-shirts printed with snarling Rottweilers or big stars, among his fetish motifs.

Setting a daring template informed by the energy of the club scene and tinged with sexual provocation, Tisci quickly became one of men’s wear’s most influential and original designers.

He had recently expressed a desire to extend Givenchy’s reach as a lifestyle brand, having introduced a range of clothes for babies and children that is slated for July delivery.

According to market sources, Givenchy increased more than sixfold in size during the Tisci era, and the brand’s revenues are now north of 500 million euros, or $540 million at current exchange. The number of employees has risen to more than 930 from 290 in 2005.

Philippe Fortunato, ceo of Givenchy, has been spearheading its recent expansion thrust and credited Tisci’s “visionary qualities that led to a strong growth of the brand.”

Fueled by Tisci’s design chops, powerful communication skills and clutch of A-list celebrity friends, the brand has been tracking strong sales momentum and profitability, sources said. Once dependent on wholesale, Givenchy continues its retail rollout, with a Rome boutique slated to open this year and a London flagship in the works for early 2018.

The company also recently took over direct distribution of its collections in two key luxury markets: Dubai and Singapore.

Givenchy today boasts 72 freestanding stores, compared to only seven in 2005 when Tisci arrived.

Something of a fashion wunderkind, Tisci grew up poor in Taranto, Italy, and Como during the boom years for Versace, Armani and Valentino.

At 16, fresh out of art school, he landed a job designing fabrics for an Italian textile firm, at which point his destiny became clear. A year later, he was at Central Saint Martins and earning British scholarships that allowed him to finish his degree.

His first work experiences were in Italy, with Stefano Guerrero, Antonio Berardi, Coccapani and Ruffo Research, while he nurtured his signature label with a strong following in London. When Ruffo went bankrupt, he went soul-searching in India, gathered up his strength and returned to Milan and staged a show that would all but seal his employment contract at Givenchy.

Once installed at the couture house, he brought a dark, Goth-tinged fierceness and severity, which he ultimately married to more romantic inclinations, clashing together such disparate influences as Victorian dressing and chola culture to produce runway fireworks.

Tisci would seem a natural for Versace, given his penchant for bold prints, demonstrative hardware and tough chic.

As reported, Versace is rethinking the timing of its initial public offering as it embarks on a significant expansion plan ahead of a listing.

Asked on Jan. 19 about Tisci’s potential arrival at the company, a spokesman said, “Donatella Versace is the creative director of the company and at this time we do not have any plans to change that. Beyond that, of course, we do not comment on rumors.”

Were Donatella Versace to welcome a designer of Tisci’s stature, it would be in line with her past efforts to champion young talent. Versace tapped Christopher Kane in 2009 to help relaunch the Versus line and, when the two parted ways, she forged a new path for the brand, developing it into a seasonless line with a strong digital component, with the intention of working with young designers with a fresh approach. In 2013, she tapped Anthony Vaccarello as a guest designer for Versus, and then named him its creative director until he departed to join Saint Laurent.

To be sure, a leading designer such as Tisci would ramp up the brand’s “cool factor,” social media reach and appeal. The designer boasts 1.8 million followers on Instagram.

When Donatella Versace appeared in the Givenchy ads, Tisci told WWD: “There’s no jealousy and no competition between us. It’s a real, pure friendship: Somebody who’s part of my gang, part of my family. We want to give a message of friendship and love.”

More: Riccardo Tisci’s Most Memorable Givenchy Campaigns: A Look Back

At that time, Versace echoed the sentiment, and gave a resounding endorsement to her Paris-based counterpart: “Riccardo Tisci is extremely talented and, above all, my dear friend. We are family. I want to get rid of the old system, work together, support each other and make fashion a true global community.”

The Blackstone Group bought a 20 percent stake in Versace in 2014. Family members hold the rest of the equity.

Versace’s own stores are increasingly becoming the engine behind the brand’s growth, as shown by its performance in 2015, when retail sales were up 28.9 percent to 400.7 million euros, or $440.7 million.

Dollar figures were converted from the euro at average exchange rates for the periods in question.