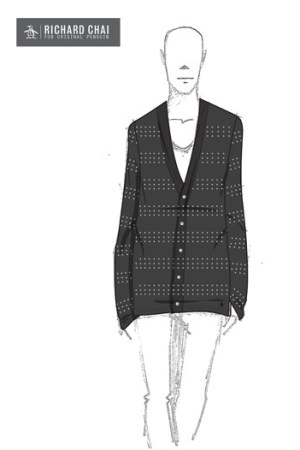 This story first appeared in the September 2, 2010 issue of WWD. Subscribe Today.

“I thought Penguin was a really interesting brand with a lot of heritage, which is important to me,” said Chai of the collaboration. “It’s iconic with a lot of history — all these Hollywood people in the Fifties and Sixties wore it, like Bob Hope and the Rat Pack and Clint Eastwood — but there’s also something witty and antiestablishment to the brand, which I think works with my sensibility.”

The spring collection encompasses nine styles of tops, including short- and long-sleeve polos and cardigans. Each style will be available in several colors and fabrics, at retail prices of about $110, which is a premium to Original Penguin’s $69 price tag for a polo, but lower than the typical price of a similar Richard Chai designer piece.

The fall 2011 line will expand into a full collection of about 25 to 30 styles, including outerwear, pants, shirts, sweaters and polos. The two parties will decide next year if the collaboration will continue beyond the planned two seasons.

“We think working with Richard elevates the brand in an aspirational way,” said Ann Payne, senior vice president of merchandising and design at Original Penguin, which is owned by Perry Ellis International. “Especially in this environment, you always want to be able to evolve the brand and keep it interesting and attract new customers. This is a way that we can channel a feeling of sophistication into the brand.”

Chai’s spring designs include fashion-forward silhouettes and washes not usually associated with the preppy look of Original Penguin. The pieces incorporate various Chai signatures such as color-blocking, dropped armholes and oversize volume. One long-sleeve polo is stitched together from different fabrics in rib, piqué and jersey in five colors. Each piece bears an embroidered logo featuring the Original Penguin mascot (internally named “Pete”) with the R.C. initials on his belly.

The line will be carried by Original Penguin’s network of stores in the U.S. and overseas, and wholesaled to specialty retailers. Original Penguin operates 23 stores globally, including seven full-price and one outlet unit in the U.S. The company is aggressively looking to expand its retail footprint.

In an Aug. 20 research note, analyst Eric Beder of Brean Murray Carret & Co. wrote: “With eight stores now, the potential exists to double the number of units in 2011 (three full-price and five outlets); ideally, the potential exists for the brand to support up to 50 stores in the domestic arena.”

Original Penguin will create print ads, an online campaign and in-store events to tout the launch of the Richard Chai line, with most of the investment for the fall, said Daniel Lakhman, the company’s branding manager.

This collaboration is the first outside branding partnership Original Penguin has undertaken in its recent history. Chai, who receives a design fee for the project, has previously collaborated with a number of brands, including Keds, Alternative Apparel, Topman and Target.

Earlier this year, a business partnership between Chai and South Korea-based SK Networks Co. Ltd., which had taken a minority stake in Chai’s company in 2007, was dissolved.

Men’s wear, which Chai launched two years ago, now accounts for about 40 percent of the designer’s sales. The men’s line is sold in about 50 retail accounts worldwide, including Barneys New York, Saks Fifth Avenue, Bloomingdale’s and Odin in the U.S. Asia is another key market for the label, where it is stocked in Japan’s Isetan and Hong Kong’s Harvey Nichols.