The designer talks about his motivations and stepping outside the lines. 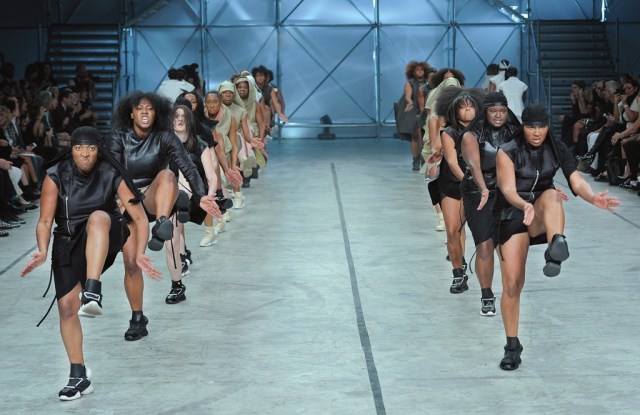 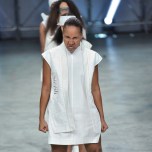 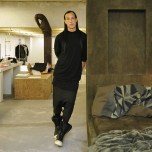 Fashion can be a powerful thing—transformative, transporting and unifying.

Consider what it did for Rick Owens, a native of Porterville, Calif., who described his younger, less-fashionable self as a “soft sissy” who wore husky-size pants.

Today, lounging on the leafy first-floor terrace of his bunkerlike Paris headquarters, Owens looks every inch the dark lord of glamorous Goth he has morphed into, from his sinewy, gym-hewn physique to his curtain of poker-straight raven hair.

He is cloaked top to toe in the blackest black, as if dipped in tar: an inky cashmere shawl draped over his muscular shoulders; his droopy, low-crotch shorts finished off with black knee socks and floppy, sneakerlike leather boots.

“With a little discipline, a little creativity and work, I changed into what I wanted to be. If I can do it, anyone can,” he says of his extreme makeover, then quickly displaying his polite-to-a-fault, nonjudgmental nature by adding: “Of course, if that’s not your priority, that’s fine, too. You know, fashion and style isn’t everything.”

On this unusually warm October morning, arias are leaking from the building’s open windows, and Owens is being quizzed about his spring 2014 women’s fashion show, a pulse-pounding, awe-inspiring spectacle starring American college step teams that attendees instantly recognized as a major fashion moment.

“A piece of fashion history,” declares Stephen Ayres, head of fashion at Liberty in London. “One we won’t forget,” agrees Tomoko Ogura, senior fashion director at Barneys New York, praising the “soul behind the show and the spirit behind the performance.”

Indeed, more than a mere catwalk parade, it was a visceral celebration of girl power, of team spirit and—ultimately—about the deep human need to belong.

Asked if he was sure he had orchestrated a hit, Owens says he feared the show could “come off as a stunt.”

In particular, he’d had trepidations about members of the four step teams—the Zetas, Washington Divas, Soul Steppers and Momentums—using “grit face” expressions, and was adamant that the dancers only scowl if they felt comfortable doing so.

“One of the most elegant things in the world is having a sense of humor about yourself,” says Owens, a man who plants nearly naked, sometimes severed wax figures of himself in some of his boutiques. “When I saw them using that grit, it was hilarious, it was fun, it was smart, and I thought, That’s the kind of spirit I love.”

Told his show was a success, Owens hands the crown to the dancers: “All I did really was dress them. Everything else was them.”

The high-energy parade of athletic-minded clothes climaxed with the teams linking arms one by one and exiting the runway like some giant, swaying, techno-loving caterpillar. More than a nifty finale, it was a veiled allusion to the human chains students would form as a show of solidarity during America’s race riots, and a way to move through them, according to Owens.

“I think people [at the show] felt that spirit and were moved because it’s not just about race. It’s about belonging. Everybody has felt like they don’t belong, everybody has wanted to be part of something, but felt that they weren’t, so I think that’s a very primal thing that everybody there felt and everybody could relate to at that minute.”

Speaking in his disarming American drawl, Owens makes it clear he did not set out to make a statement about diversity on the runways, even if it is a hot-button topic. In fact, one of the original impulses for his collection came from his mother, who travels to Paris twice a year for her son’s show.

“She is here during all the model castings and everything, which I love because sometimes you have a 16-year-old girl in a transparent dress having to walk in front of a lot of judgmental people and I just love that my mom is there being cute, giving her cookies and making her feel homey,” he says, a wide grin breaking out on his tanned face.

Yet Owens took her gentle, yet frequent rebukes during fittings—that “it’s only for tall, skinny girls,” or “you have to be thin to pull that off”—to heart, inspiring him to “do stuff that everyone can respond to,” including women with ample bosoms and a full set of curves. “I’ve always heard from retailers that my clothes work on a lot of different body types,” he says, citing his knitwear and jerseys in particular. “I just wanted to go a little further” and emphasize that “everyone is invited” to his fashion party.

“I love dressing giraffes with beautiful long eyelashes, but I like dressing lionesses, too,” he remarks. “It was a real technical exercise in, ‘Are we really getting sizes right? If we are grading from a size 38, are we getting an accurate 48 or are we getting something that is distorted?’

“It was a great way of forcing the factory to really address all of this and make sure that their fitting was smart,” he continues. “I’m not saying that we’re the best in the world at this. I am just saying that we paid attention to it.”

Owens confesses the collection did not contain as much variety as usual, consisting mainly of sleeveless tunics, robes and short dresses with jutting samurai shoulders. Hoods and draping added drama, while the sporty kicks came from graphic sneakers done in collaboration with Adidas. Orders for the collection jumped 15 percent versus a year ago.

Asked which came first—the idea for a fits-all-body-types collection or the casting of step teams—Owens says “kind of both.”

In fact, he had a real stepper in his midst, Asha Mines, one of his main studio assistants, who teamed with another staff member to scout and coordinate performers of the energetic dance form with roots in African-American sororities and fraternities.

“It sounds more elaborate than it was because they were already rehearsing stepping anyway. They just had to modify it a little bit to fit into our timing,” he says. “The bigger deal was tickets and passports: making sure everybody had their passports.”

To be sure, this was not the first time Owens had strayed from the norm in terms of show casting. While he has used the expected runway stars, he also tends to populate his runway with edgier types, and has occasionally obscured their beauty with face-covering or frizzed-out hair.

“I like it to say, ‘There’s a standard of beauty that’s cliché and we’re not buying into it,’” he points out. “Everything I do is proposals, it’s not a manifesto. I like the mix.”

The dalliance with step dancing was not Owens’ first move toward full-on fashion theater. At his spring 2014 men’s show last January, he enlisted Estonian punk/metal band Winny Puhh to play—a few of the members occasionally strung from the ceiling by the ankles—as models whisked around them.

“Ironically, I was extremely uncomfortable in the beginning and I never wanted to do fashion shows,” he reveals. “And then I started getting into the pace and figuring out a way to project my esthetic in a consistent and confident way, and hopefully convincing way. So gradually, the shows started becoming more festive.”

Don’t be so sure he will try any time soon.

“I don’t want to be show king. I don’t want to sound disapproving, but that’s not the kind of designer that I’m attracted to. I felt like it was appropriate because I was building up to this thing. I did the elements with the fire and the wind and the fog and the foam. I liked those because they were so simple and almost dumb. They were very smoke-and-mirrors. They were big dramatic, cheap effects that were almost brutalist,” he says, returning to a favorite word of his. “Now I feel like I’m going to back off. I don’t want to be that sensational all the time.”

Despite what he described as a “completely freestyle” entry into the fashion business in Los Angeles in the early Nineties, Owens’ fashion business appears to be thriving, approaching 100 million euros in revenues, or about $137 million at current exchange.

Midway through the interview, he cries “scoop,” disclosing that he just signed leases for company-owned stores in Miami and Milan, slated to open in December and February, respectively. They will add to a boutique network that already spans locations in Paris, New York, London, Hong Kong, Seoul and Tokyo.

Also coming on stream in December is worldwide e-commerce, selling all of his product lines, including his hit spring 2014 collection, in a wide range of sizes.

Owens shares credit for his company’s steady progress to his Italian production partners, Olmar & Mirta; his chief executive officer, Elsa Lanzo, and his distribution chief, Luca Ruggeri, who together own 20 percent of the business. (Owens and his wife, restaurateur Michele Lamy, control the rest.)

Owens is aware that his avant-garde, industrial-tinged confections, mostly in black and gray, are perhaps not as popular as colorful or girly ones.

“I’m conscious when you’re into something like this, you automatically alienate a lot of people and I’m going to try not to do that,” he says.

At the same time, Owens is adamant about staking his claim on his daring, dark-spirited universe, which has been influential—on other runways, and the high street.

Still, he’s proud about how far he’s come, selling his collections to some 800 wholesale doors, including corners in Bergdorf Goodman and Selfridges, and in-store shops in Asia. His product scope includes the denim range DRKSHDW (pronounced “dark shadow”), the Lilies line of jersey for women, exotic leathers and furs under the Hun Rick Owens label, plus large-scale furniture items sold through art galleries.

What compelled Owens to start making clothes in the first place was the realization that much of what some designers make is strictly for the runway, recalling an early trip to Paris when he tried to buy a Thierry Mugler outfit in the window of a shop, only to be told it was only for show.

Ditto for his disillusionment on reading an interview with shock-rock star Alice Cooper in which Cooper confessed that what he really likes to do is drink beer and play golf.

“I remember being devastated, thinking, ‘I want this to be real. I want Kiss to wear that makeup all the time,’” Owens recalls.

“I always resented runway wedding cakes that you couldn’t buy in a store,” he observes. “I hate it when designers do these women as parade floats and they come out at the end in jeans and a T-shirt.”

“I get to celebrate all of the things that I think are wonderful and that’s what this really is about,” he says. “I’m having a lovely time. One of the fundamental goals in life is being listened to: being listened to in a marriage, having your children listen to you. I have been given an opportunity. I have said things and people have listened. You can’t ask for much more than that.”