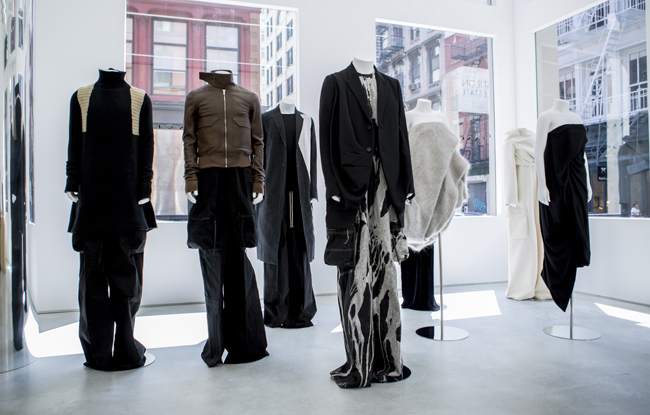 Rick Owens has added a sprawling retail shrine to his poetically gothic vision in SoHo. The new Rick Owens store opened Saturday at 30 Howard Street on the corner of Crosby Street in the space formerly occupied by Jil Sander. Owens and his wife Michelle Lamy did a complete interior overhaul of the 8,000-square-foot space, pouring new concrete floors, installing a massive site-cast concrete staircase between the first and second floors and working with mirror, steel and painted sheetrock for the rest of the design elements.

“Before I took the space over it was a totally different store,” said Owens. “To really make it mine I had to go in a completely different direction. That’s why we decided on that grand staircase that’s ultra-theatrical but fun and really takes control of the space.”

Speaking of control, Owens handed it over to Lamy for the first floor, where she staged an installation, or “ritual” as Owens called it, of site-specific furniture made from concrete, plaster, foam and rock crystal, some of the forms upholstered in camel fur. Typically Owens designs his stores on his own, but “Michelle is going to give it a chaos that is very attractive when she does it, and not quite as convincing when I do it,” said Owens during an interview from Paris (he will not be in town for the store’s opening). “I’m not a chaotic type, but I think we needed that kind of warmth.”

Approximately 275,000 pounds of concrete was used in the store design and the floors had to be double-reinforced to accommodate one of the large-scale rock crystal furniture pieces, which is not for sale. “I avoid selling the furniture in the stores because then it seems like fashion accessories,” said Owens, adding that the furniture in the Howard Street store is purely experimental and not part of the Owens collection. In December, he and Lamy will have a furniture and film exhibition at the Museum of Contemporary Art in Los Angeles. For those interested in buying into the Owens lifestyle beyond the ready-to-wear (housed on the second floor), the SoHo store will carry an exclusive collection of table and flatware, including ox bone plates and flatware, white clay tableware from Morocco and rock crystal chalices made in Pakistan. “We’ve done vases and ashtrays and urns and plates, but we’ve never done tableware with flatware,” said Owens. “It’s not something that’s going to be in big distribution.” Don’t add it to the wedding registry just yet.

Howard Street is Owens’ second store in New York. The first opened in 2008 on the edge of SoHo and TriBeCa at 250 Hudson Street and is closing as the SoHo store opens. “We were looking to move because we realized that the allure of being on the edge of town [faded]. It would make more sense to be a little bit more available to people,” said Owens. “Also, the [Hudson Street neighborhood] changed. Some stores closed and it wasn’t really what it was when I first moved there. We had a great time but we outgrew it, too.” With the new neighborhood comes new design and fashion neighbors, including Opening Ceremony and De Vera. Owens’ New York offices and showroom were already located in 30 Howard Street, giving him dibs on the Jil Sander space when it came up.

On the subject of the convenience of showroom and store being in the same building, Owens segued into the fact that after 15 years of manufacturing under a license with Olmar & Mirta, in 2015 he merged his production into Owenscorp, which houses all of labels including Rick Owens Lilies, Drkshadow and Hun Rick Owens. “We’ve done a lot of consolidating this year,” he said. “It’s a great step.” Asked what made it possible to set up his own vertical manufacturing, Owens said, “I don’t know, I guess we just had enough money.” If things are going well, he credits it to remaining outside the mainstream. “I’m not going to gloat, but my particular niche has never really been part of the general fashion story,” he said. “People ask me about straight-from-the-runway shows and that’s a whole different world. I’m not overexposed in a way. Some people might argue that, but I’m not exposed in that way where people get fatigued by me.…We’re just quieter so a lot of those fashion rules don’t apply to us.”

The SoHo store is Owens’ ninth. He has freestanding stores in Paris, London, Milan, Miami, Los Angeles, Tokyo, Hong Kong and Seoul. He wants a quiet opening for New York. Store parties aren’t his thing. “If I were to go to New York, I would have to do some kind of little party and any coverage I would get would be at the bottom of the list because I wouldn’t have any celebrities,” he said. He’ll stay in Paris, working on the spring women’s show, for which he said there are no runway acrobatics planned — no sorority dance teams, no women harnessed together, carrying each other, as he did last spring. “I don’t know if I’ve become Mr. Showbiz or something,” said Owens. “I didn’t mean to. I really mean to do things that I would want to see…I have an opportunity to put out my idea of beauty in as many ways as possible.…People get physical with women by putting them in sky-high shoes and I’m getting physical with women in different ways, but I think that’s our positive energy. I’m trying to say nice things when I do a show.”