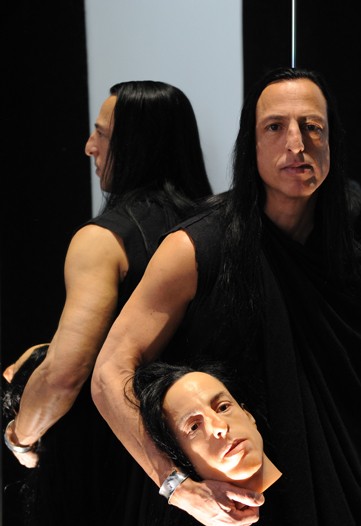 LONDON — Rick Owens has made a new home in London for his romantic, Gothic-edged designs.

The Paris-based designer has opened his first store here in what was formerly an antiques store on Mayfair’s old-world South Audley Street, nearby London’s new hot retail district of Mount Street. “The fact that it was around the corner and it wasn’t on Mount Street was a super plus — it was such a beautiful corner,” said the raven-haired Owens, clad in a black shawl and trousers and black-and-white high-top sneakers, as he put the finishing touches on the store. “It was a little bit wallflower, it wasn’t right in the middle of the dance.”

And while the gloom of the shaky economy looms large, Owens said he was undeterred. “I do think [it’s] not a bad time to do it,” he said of opening the store. “What if all the stores that carry me are going to have a hard time of it? It’s in a way a good investment. Since I decided to keep going with this design thing anyway, I might as well do some stores. I might as well invest in it.”

Owens said that in the two weeks since the store had its soft opening, there has been a steady flow of customers. “With the Paris store we had a group of people in London who were very aware of us opening, so we didn’t really have to shout,” said Owens. “The London customer is kind of a mix between a Paris customer and the New York customer. Kind of with that sense of romance of the Parisian customer but [mixed] with the very sharp and demanding New York customer.”

The 3,800-square-foot, two-story store is decorated in Owens’ signature spare style, with concrete floors, textured concrete walls, custom bronze clothing rails and cashmere drapes at the windows. The store — which is near Marc Jacobs, Christian Louboutin and Balenciaga — carries all of Owens’ collections, including his Palais Royal fur collection and Lilies line of jersey pieces, alongside a rail of styles by Gareth Pugh and Alice Lemoine, two young designers whom Owens supports.

“I can’t have young people in my studio that have their own ambitions, because they’re dying to be creative,” said Owens. “I can’t get in their way and make them to do what I want, so I tell them, ‘You have to do your own thing.’”

Owens has also dotted in one-off items that resonate with the store’s location. There are first editions of E.F. Benson’s 1916 novel “The Freaks of Mayfair,” along with DVDs of Alla Nazimova’s 1923 silent film adaptation of Oscar Wilde’s “Salome,” which customers can buy. There’s a wax model of Owens’ head displayed on a concrete plinth in the store’s window (“My little ode to Salome,” he said with a laugh) and a bowl of gray and white M&Ms by the cash desk that bear Owens’ logo.

Barbara Mariani, managing partner of Owens’ Paris and London stores, said she expects the store to achieve sales of 2 million pounds, or $2.9 million at current exchange, in its first year. Mariani declined to comment on the rent the company is paying but said the designer “didn’t get a discount.” Rents on the street are said to range from 200 pounds to 265 pounds, or between $293 and $389, a square foot.

Next up, Owens plans to open a store in Tokyo in September. “We have a beautiful space in Tokyo, then I think it’s time to stop a little bit,” he said. “I like being able to…move things around and fluff the pillows and stuff…it’s a very personal thing.”