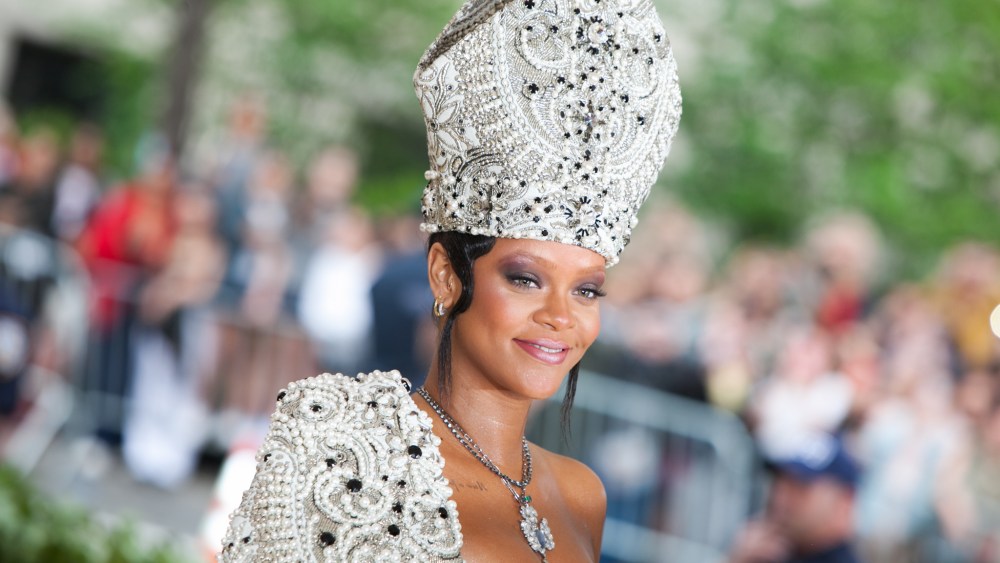 Rihanna and LVMH Moët Hennessy Louis Vuitton have officially confirmed they are going into the fashion business together under the Fenty banner.

The pop star and the French luxury giant issued a brief statement saying the new luxury maison would be based in Paris.

It will be “centered on Rihanna, developed by her, and takes shape with her vision in terms of ready-to-wear, shoes and accessories, including commerciality and communication of the brand.”

The release mentioned the collection would debut for spring 2019, but did not detail the distribution strategy or precise timing.

It is understood the products will be released in the coming weeks, mainly via digital channels. The statement spelled out a web domain — fenty.com — and revealed the logo.

Rihanna pointed to a new Instagram account for the house on her @badgirlriri feed and it amassed more than 65,000 followers by 10 a.m. EST. It has no posts yet.

“Everybody knows Rihanna as a wonderful singer, but through our partnership at Fenty Beauty, I discovered a true entrepreneur, a real ceo and a terrific leader. She naturally finds her full place within LVMH. To support Rihanna to start up the Fenty Maison, we have built a talented and multicultural team supported by the group resources. I am proud that LVMH is leading this venture and wish it will be a great success,” said Bernard Arnault, chairman and chief executive officer of LVMH.

For her part, Rihanna said, “Designing a line like this with LVMH is an incredibly special moment for us. Mr. Arnault has given me a unique opportunity to develop a fashion house in the luxury sector, with no artistic limits. I couldn’t imagine a better partner both creatively and business-wise, and I’m ready for the world to see what we have built together.”

WWD broke the news on Jan. 17 that the high-profile project was in the works, as LVMH had already handpicked a clutch of employees from within, including some from Louis Vuitton and Celine, to work in tandem with Rihanna and some of her key associates. Among them are Veronique Gebel, previously rtw director at Louis Vuitton, according to market sources.

This marks the first time LVMH — whose forte is modernizing legacy brands like Dior, Louis Vuitton, Givenchy, Bulgari and Dom Pérignon — has launched a fashion brand from scratch since it set up a couture house for Christian Lacroix in 1987.

Rihanna boasts more than 70 million followers on Instagram, and is expected to release new music some time this year.

A year later, she created a range of futuristic sunglasses in collaboration with Dior as part of her brand ambassadorship. Earlier this year, she test drove a pair with her Fenty brand splashed across the temples, dropping a colossal hint about the upcoming project with LVMH.

Rihanna has demonstrated a serious interest in, and influence on, fashion — along with formidable design chops and acute instincts — with her tenure as the creative director of Puma, energizing the German activewear brand with her Fenty by Puma project, and following it up with successful forays into beauty and lingerie — the former with LVMH-controlled Kendo; the latter with California-based TechStyle Fashion Group.

For LVMH, the Rihanna line signals a further move outside its comfort zone as it continues to diversify its holdings, having recently invested $2.6 billion in luxury travel operator Belmond Ltd., owner of the Venice Simplon-Orient-Express train and hotels including the Copacabana Palace in Rio de Janeiro.

Rihanna’s talent, charisma and beauty have made her a favorite of fashion designers worldwide. The Barbados native has previously modeled for Gucci, Emporio Armani and Balmain.

Rihanna Gets Ready for Her Next Act in Fashion

How a Foundation Mishap Led Hector Espinal to Work for Rihanna

Watch: From Fashion Icon to Designer: Rihanna’s Fashion Forays Through The Years