Economic and political uncertainty is expected to keep pushing up cost of gold. 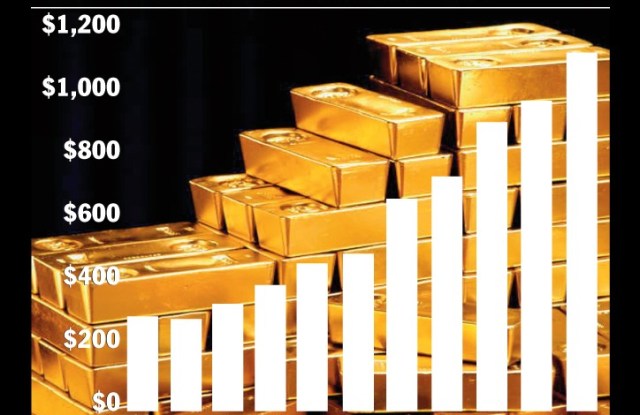 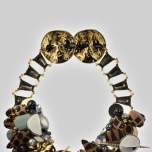 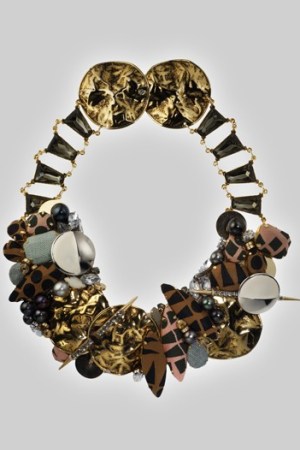 The gold rush is becoming a problem.

The jewelry and watch categories are feeling pressure because global economic and political turbulence has pushed the price of the precious metal about 13 percent higher in the last six months as financial investors seek a safe haven from seesawing currencies. The precious metal is selling for more than $1,200 an ounce — peaking just shy of $1,250 last month — compared with an average of $928.64 in May 2009 and $421.87 in May 2005.

The price trajectory appears unlikely to swing in the other direction anytime soon because of the debt crisis in Europe and other destabilizing factors, although gold hasn’t reached the highs of the early Eighties, which, adjusted for inflation, are equivalent to as much as $2,100 today.

“With gold prices strengthening, combined with the recession, these two factors together have caused quite a few difficulties in the jewelry industry,” said Philip Newman, research director for GFMS, an independent precious-metals consultancy. “As the gold price goes up, retailers may try to pass on some of the cost, but that is much easier to pass on when the economy is going well. Now that isn’t the case, and there’s consumer resistance” to climbing prices.

He predicted there could be new record highs by the end of the year.

“The reasons for this are the global uncertainty, Greece, Spain, the euro, saber rattling between North and South Korea…People are still looking to invest in gold,” Newman said.

The run up in gold, which doesn’t appear to have taken a significant bite from the high end yet, has compelled companies to innovate in their designs in order to focus on value and alternative metals, designers and executives said. It has also boosted the popularity of costume jewelry.

“Customers are very value-driven and will spend the money if there’s value there, but there’s no question that the amount of discretionary income has gone down…so the aspirational day-in, day-out purchases will go down as well,” said former Judith Ripka president Janice Winter, chief executive officer of Luxury Brand Consulting Inc., a branding and marketing firm.

Johnny Wizman, president and ceo of Swiss luxury watch firm Bedat & Co., said, “The production aspect is much more expensive. It depends on the brand, but sales have been affected in gold, just because of the price point.”

Bedat & Co. has adapted by incorporating the use of steel in its watches.

“We put in a steel clasp, which is much stronger than gold, and so you get much more wear out of clasp, but no one ever sees it,” Wizman said. That change drops a watch’s price 10 to 15 percent.

As retailers seek to offer jewelry and watch collections at prices that are palatable to consumers, they are less likely to take a chance on gold.

“With gold jewelry right now, everyone wants to do it on consignment, so a designer is taking the risk in inventory” by creating new product that may not be picked up by retailers, jewelry designer Amrita Singh said.

David Rees, designer of TenThousandThings, a 20-year-old jewelry line, is both an independent retailer and wholesaler to stores such as Barneys New York and Ylang23.

Rees said despite the concerns about gold jewelry, which make up 50 percent of the merchandise in his Meatpacking District boutique, sales are the same as previous years “down to the number.”

The designer believes his line has remained profitable because of its distinctive style. “I thought as prices rose, we would see a greater resistance, but we have really not seen it. I think it has everything to do with being a cult collection with a particular, original look.”

A positive outgrowth of costlier gold is a heightened emphasis on fresh approaches.

“When there’s a recession, how do you get money out of the [consumer’s] pocket? Only by being very innovative…if they see a fantastic novelty, that is one of the ways to make people buy, not when you reduce creativity,” said Jean-Claude Biver, ceo of Hublot Watch Group.

Rees echoed that assessment. “Market realities force you to be very careful with the designs, and extra creative, and neither one of those things is a bad thing. Every problem is just an opportunity to make your product better.”

Biver also views the gold price trend as a potential plus for his business.

“The more it rises, the more people wear gold watches, because they believe that today the price is less than it will be in two months. When [gold prices are] going down, people are reluctant to buy. So the rising gold price is a great asset, it helps to promote gold watches.”

Mindful of consumers who are more price conscious, designer Elizabeth Locke has experimented with her signature gold offerings by incorporating more semiprecious stones. “I have done some necklaces and bracelets that utilize stone links along with gold, [such as] a black jade link with a gold connector link,” Locke said. “It does bring the price down some.”

That spirit has gone beyond design and into retail.

“A lot of retailers are trying to limit the extent to which they have to raise their retail prices…It’s becoming more of a challenge to have something with 14-karat, so retailers have to be more creative, with more of a focus on design, and look to other avenues,” said Newman of GFMS.

Costume jewelry is a category that is thriving as a result. The lower-priced offerings are resonating partly because of visibility on the red carpets and runways — Oscar de la Renta and Christian Dior, among others — as well as prominent placement at luxury retailers such as Saks Fifth Avenue, Neiman Marcus, Henri Bendel and Bergdorf Goodman.

Singh produces a fine jewelry line and a costume jewelry line. Responding to the spike in gold prices, Singh is focusing on her costume collection. “Gold has made a big difference in the business, in terms of consumer spending, and there’s been a shift toward costume jewelry,” she said.

With costume jewelry, “the customer can get more for their buck, a bigger statement piece, and they don’t have to deal with insurance,” Singh said.

“We are seeing a lot of designers moving away from bright, high-luster yellow gold for the fall, and trending toward alternative metals like bronze and rhodium/gunmetal,” she said.

In addition, “a lot of fabric and nonmetal materials [are] being used as design elements…denim mixed in with chains, hand-beaded and hand-sewn fabric necklaces, and tons of embroidery…such as avant-garde jewelry from Roarke, Dori Csengeri and Lizzie Fortunato,” Galgano said.

Jodi Kaplan, Bergdorf Goodman vice president and divisional merchandise manager for jewelry and watches, said customers are seeking quality above all else.

“We have some classic collections that have had to take significant price increases due to the rising cost of the material, but if the design and quality are there, we are finding that our clients are still willing to invest in a great piece of gold jewelry,” she said.

Locke, who has been in business for 22 years, credited her brand’s stability to consumers’ desire for a timeless investment. “People are spending their discretionary income with more attention than they did once upon a time. If the consumer is considering two [different purchases], she’ll consider, ‘What am I still going to be wearing 10 years from now?’ ” she said.

Fine jewelry and bridal jewelry have been spared the brunt of the gold fallout.

“Bridal is still doing quite well for two reasons: People are still getting married and the woman is not going to give up her wedding ring,” said luxury consultant Winter. “But also, bridal designs have less metal [than most other jewelry] and so it’s not quite as impacted.”

H.Stern, whose price point averages about $10,000, and deals almost exclusively in fine gold jewelry, “has not seen an effect,” said Susan Nicholas, ceo of the H.Stern N.A. “Because of the uniqueness of the brand, there’s sustained interest from customers who are discriminating and looking for something special.”

Summing up the view of many fine jewelers, Cody Kondo, Saks’ senior vice president and general merchandise manager for handbags, shoes and jewelry, said, “There will always be a customer for beautifully crafted gold jewelry, regardless of price.”