The lobby of the Mare real estate development

MILAN — Roberto Cavalli is extending its hospitality business to the American continent.

Even if it’s navigating troubling waters, the Roberto Cavalli company — which earlier this month filed a restructuring plan with the Court of Milan as it continues to negotiate a sale — unveiled a new project.

In particular, the luxury brand will realize the interiors of the common areas and the 111 four-bedroom apartments of Mare, a 21-floor tower to be built by Grupo Peninsula on the Southern coast of Acapulco. The project is expected to be completed in December 2022.

“We are happy to work with Peninsula on this first project in America,” said Ferraris. “I think that offering a 360-degree lifestyle is really at the core of our DNA and curating the interiors of Mare, we will combine the best Italian craftsmanship with Mediterranean flare and contemporary design.”

“We are really excited to develop this project in a prime location like Acapulco with Roberto Cavalli and we hope to continue working with the brand on other developments,” said Felipe Tomé chief executive officer of Grupo Península, which, along with Citicapital, invested 2.5 million Mexican pesos in the project. “The power of the Roberto Cavalli brand is so strong that 40 percent of the apartments have already been sold…we placed the first stone only yesterday.” 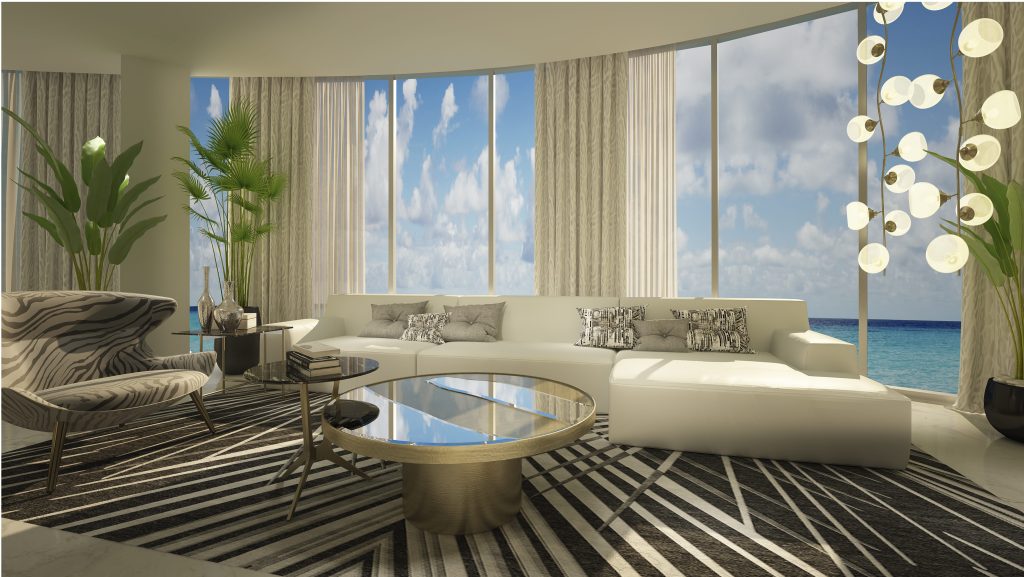 An apartment of the Mare real estate development.  Courtesy Photo

According to Tomé, the project mainly targets people from Mexico City, who can reach Acapulco in only one hour with a direct flight.

“Approaching this project, we tried to integrate the most authentic DNA of the Roberto Cavalli house into the Mexican atmosphere of Acapulco,” said Franco Mariotti, who oversees the Roberto Cavalli Home line. “Our signature prints, fabrics, wallpapers, carpets and furniture pieces will give a distinctive look to the outdoor and indoor common areas and to the interiors of the private residencies.”

“Mare” is the latest addition to Roberto Cavalli’s portfolio of hospitality projects. In May, the Florence-based company inked an agreement with Dar Al Arkan, the largest publicly listed real estate developer in the Kingdom of Saudi Arabia, to develop Mirabilia, a new upscale residential district in the Shams Ar Riyadh development. One hundred sixty villas are expected to be completed in 2021, with an initial investment of around 120 million euros for 80 villas to be developed in a first phase.

As reported in December, Cavalli also teamed with Dar Al Arkan to develop the interiors of a luxury tower in Dubai named “I Love Florence,” which is expected to be completed in 2020. The investments in the 34-story waterfront skyscraper located on Dubai’s Water Canal in the Business Bay area total 800 million dirhams, or $217.8 million.