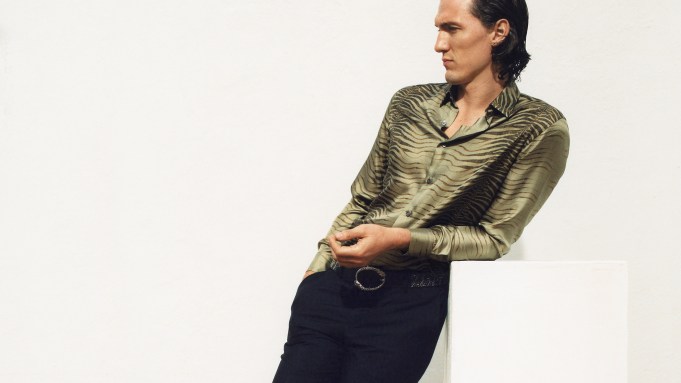 FLORENCE — Gian Giacomo Ferraris can already see the “small little leaves in the bonsai” that are shooting out under his care. The chief executive officer of Roberto Cavalli SpA stands by his plan to see the company break even in 2018, leveraging better-than-expected results last year.

“We are satisfied because we have to analyze the relativity of the figures,” said Ferraris during an interview at the brand’s headquarters here. “We are delivering what we promised and set the basis for growth,” added the executive, who joined the company in May 2016 after exiting Versace. “The restructuring was done quickly.”

While still operating at a loss, that figure was substantially reduced last year thanks to tight cost control and the reorganization set in motion in 2016. Operating losses before interest, taxes, depreciation and amortization totaled 7.1 million euros in 2017 compared with a loss of 26.2 million euros in 2016. As of Dec. 31, the company had a positive net financial position of 1.2 million euros.

In the 12 months ended Dec. 31, revenues were down 1.8 percent to 152.4 million euros, compared with 155.2 million euros in 2016, but Ferraris emphasized that the figure stabilized after years of steep declines in the range of about 25 percent each year. Stabilizing sales was one of the most urgent tasks when he took over, as reported.

“Doing better than expected during a turnaround and in a slow growth market is all but obvious,” continued Ferraris. “To me, it confirms that our roadmap is correct and that we have the right creative direction and management team. We are now considering how to accelerate the transition from the first phase of our plan to the second phase of value creation. Based on what we’ve seen so far, we confirm our target to reach operating profitability in 2018.”

Revenues generated by retail and wholesale sales together grew 3 percent to 110.3 million euros, offsetting a decline in royalty income, mainly due to a non-recurring fee of 8 million euros booked in 2016. Ferrari underscored that direct sales were achieved despite the closure of six stores that were “unprofitable and not relevant internationally,” from Vienna to Madrid; relocations, and the rationalization of the wholesale business. Retail sales totaled 64 million euros.

“We had zero presence in Asia, but there is a strong brand awareness there,” said Ferraris. Last year, Cavalli opened two stores in Beijing and in 2018 units are scheduled to open in Chengdu in April, in Harbin in May or June, and will be followed by a men’s only store in Macao.

As of year-end 2017, the group operated 87 Roberto Cavalli monobrand stores, of which 46 were directly operated and 41 were franchised.

Wholesale revenues were up 15 percent to 46 million euros.  The company is becoming less dependent on royalties, following its taking inhouse its men’s wear, innerwear, beachwear and sportswear collections starting with the spring/summer 2018 season. On the other hand, the company is growing its home line and launching two new interior design projects, including the “I Love Florence Tower” in Dubai to open in 2019 with Saudi Arabia-based developer Dar Al Arkan. Cavalli will show its latest home collection during Milan’s international furniture and design show Salone del Mobile next month.

Ferraris throughout the interview praised the work done by creative director Paul Surridge, whose first collection bowed for spring. Surridge succeeded Peter Dundas, who exited the company in October 2016.

“The fall collection has given us a strong sign of confidence, as we’ve seen an inversion of trend and a 14 percent increase in wholesale. We have new clients and the important ones are back,” the ceo said, ticking off Bergdorf Goodman and Joyce among the latter. “These were historical clients we lost in the transition.”

A day after revealing that the brand will be the guest designer at Pitti Uomo in June, Ferraris said the development of the brand’s men’s wear category was among the company’s strategic projects. The division currently accounts for 15 percent of sales and Ferraris is “preparing the ground” for growth by the end of the year.

“We send a message at a global level by showing at Pitti,” enthused Ferraris. “Florence is our home and our headquarters and we want our men’s wear to be a pillar as much as our women’s wear.”

He explained that this was not a one-off project and that, given the international scope of the brand, it may even take the collection to show in cities such as Shanghai or Tokyo. In February, Surridge opted for a coed show, presenting a few men’s wear designs.

The European Union last year accounted for 48 percent of sales, followed by the U.S., which represented 31 percent of the total. Ferraris was mindful of the strong euro compared with the dollar since the beginning of the year. Asia accounted for 7 percent and the rest of the world area, including the Middle East, for 14 percent.

The company will unveil a new retail concept in a Berlin store opening in June that will carry both the men’s and women’s collections.

In May 2016, Italmobiliare SpA, the publicly listed investment group owned by the Pesenti family, took control of the brand’s most recent owner, Italian private equity fund Clessidra Sgr SpA. Roberto Cavalli himself retains a 10 percent stake in the firm, but he has eased out of the fashion industry.