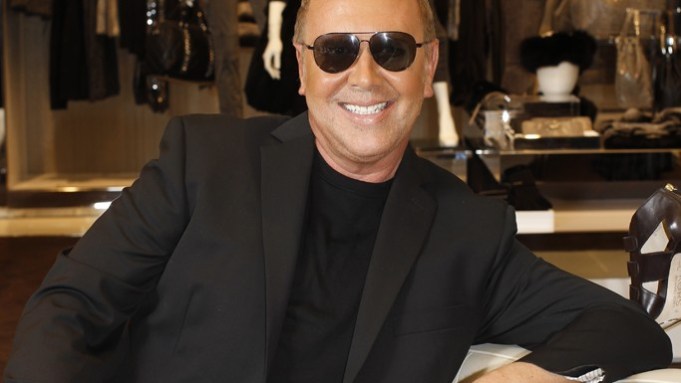 Michael Kors found himself locked out of his own store on Wednesday evening — or at least he thought he was.

When Kors arrived to check on his new flagship at Rockefeller Center, his largest in the U.S., the night before the opening, he tried to enter through the front doors at 610 Fifth Avenue, only to find them still closed. Within seconds, the newly married designer was swarmed by passersby from all corners of the world, asking to take his photo, complimenting him on his shoes and watch, and on recent articles published on him.

Now into the ninth season as a judge on “Project Runway,” Kors is quite used to the attention, and it’s something he has embraced wholeheartedly. The popularity has been benefiting his growing retail network, which will number 200 units worldwide by the end of this year — about 150 of which will be lifestyle concept stores such as the Rockefeller Center flagship, with a main focus on accessories from his Michael Kors, Michael Michael Kors and Kors Michael Kors lines.

Since kicking off the global retail strategy in 2006, Kors’ expansion has been fueled by the lifestyle concept. Kors’ estimated sales volume exceeds $1 billion, with Michael Michael Kors accounting for 90 percent of that.

With Rockefeller Center, Kors is making a major statement about the solid state of his company, and it could serve as a glowing showcase to help steer the future of the brand, which recently raised an estimated $500 million capital through a private placement with the eventual aim of going public, perhaps as early as next spring. The offering was oversubscribed, with existing investors Silas Chou, Lawrence Stroll and chief executive John Idol buying more shares, as well as new investors.

“When we started these lifestyle stores, I kept saying to people, ‘If you don’t want to spend your life shopping in a zillion different department stores to see all the different things I do, we will give it to you under one roof,’ but that was always still a very edited selection,” Kors said. “This is my department store. The shoe selection has quadrupled. This is the first time we have an entire room for jewelry and watches. It’s like my Harry Winston. Harry Winston does jewelry for millions of dollars, though — we are giving you glamour at a price.”

The diversity of people who approached him that night served to reinforce Kors’ decision to open his biggest lifestyle concept store in the U.S. The 7,000-square-foot flagship is located on the heavily-trafficked stretch of Fifth Avenue between 49th Street and Channel Gardens and across from Saks Fifth Avenue, which simultaneously opened a 1,600-square-foot Collection shop-in-shop on its second floor on Thursday.

“It’s the mix of people,” he said of the area. “Where else in the world would you have such a polyglot of ages, nationalities, income brackets and sensibilities, all of which are interesting to me. I always said that I don’t know many designers who can put the same dress on Lil’ Kim and Sigourney Weaver. We have that kind of broad range of customers. All my other lifestyle stores in New York are very specific to their neighborhoods and the type of shopper there. This is really the opportunity to see the whole breadth of the concept, also for the international customer. This is the most international thing I can do on my own turf.”

The breadth of offering at the store also reflects the growth of the Michael Michael Kors brand over the past five years, reaching across age and ethnic demographics at accessible and aspirational price points.

“When we first started Michael, the clothes were predominantly casual, and while that’s still a big part of our business, there are now also clothes and shoes for the office, and to go to a party,” Kors said. “It’s really become even more of a lifestyle. It’s everything but an evening gown, because I don’t think you want to buy a gown in what I call a ‘fast atmosphere.’ I always think that with these stores, even the smaller ones, you want to get the breadth of the whole experience quickly — fast, energetic, right, bright — whereas with the Collection experience, she is hanging out for two hours, she is eating lunch.”

By contrast, the Rockefeller Center store targets a wide range of shoppers, including the working crowd in the vicinity that might skip lunch and use the break to shop. The collection is subsequently wide in its range. Kors’ signature Michael Michael Kors Hamilton bag, for instance, is available at $6,000 in crocodile, while a miniature canvas version retails for $68. “Everyone keeps asking, ‘What happened since “Project Runway”?’ and I say, ‘We have children who are fans now,’” said Kors, dangling the mini Hamilton that fits into the palm of his hand. “If you were Suri Cruise, you’d have one for your lipstick and a black card.”

The interior concept mirrors the other lifestyle stores, with white marble floors, macassar and zebra skin hide accents in a brightly lit environment. Kors declined to disclose sales projections, but said that six New York stores were not enough for him — especially with Los Angeles already boasting 10 locations. “Obviously New York will have to catch up,” he said.

The Rockefeller Center flagship will also be the company’s main focus on Fashion’s Night Out, and for the occasion, Kors will close 49th Street for a special performance of the Rockettes. Kors has no intention of joining the cancan lineup. “Peter Allen already did that,” he said.

As it does with most New Yorkers, Rockefeller Center has a lot of personal meaning for Kors. “We’d always come ice-skating here, me very badly and grabbing the railing,” he reminisced. “I celebrated my 30th birthday at the Rainbow Room with a fake surprise party that I wasn’t surprised by.”

The store also crowns a month of personal developments for Kors, who married his longtime partner, Lance LePere, in August. “I didn’t ever think I would have six stores in Manhattan and I’d be married,” he said, his Janis Savitt-designed wedding band with four hidden diamonds from LePere’s father’s wedding band shining on his ring finger.

The new space will hopefully also serve to differentiate Kors even more from his peers—which, quite surprisingly and amusingly, has been an issue in the past.

“Lance always says that because I have a sense of humor on television, no one is afraid to approach me,” he said. “This has happened twice already, but about a month ago, we were walking near our apartment and these kids, who were maybe 18 or 19, walked behind us. The girl says to me, ‘I know who you are,’ and the guy goes, ‘Oh my god, oh my god.’ The girl says, ‘Marc, I love you.’

‘No, no, no. Not Marc Jacobs. Same profession, same first initial, wrong designer,’” he told them. “She was so embarrassed. I said, ‘Well, the two of us look so much alike.’”