With Paris couture week around the corner, Kate and Laura Mulleavy served up their own take on the tradition Thursday night. 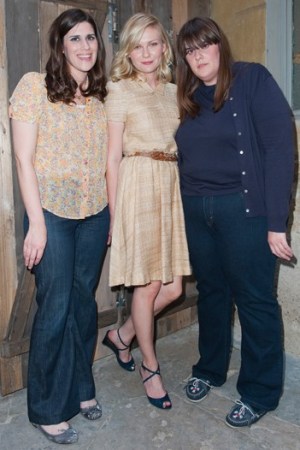 FLORENCE — With Paris couture week around the corner, Rodarte’s Kate and Laura Mulleavy served up their own take on the tradition Thursday night as the guest designers for the eighth edition of Pitti W here. Kirsten Dunst, a friend of the designers, jetted into town for the occasion.

The palette — spanning dull gold, pink, lapis lazuli, melon and moonshine white — took its cues from the frescoes of Fra Angelico in the monks’ cells at the city’s Convent of San Marco. The sisters worked drapes and folds around gently pooling columns to echo the “beautiful stagnant aspect of his subjects’ robes,” said Laura Mulleavy.

However there was nothing monklike about these creations, which were infused with a kitsch, femme fatale sensibility, reminiscent of works by the big Hollywood costume designers of yore, such as Adolph Greenberg, aka Adrian. Made from organza, taffeta, lamé and tulle, the dresses were embellished with painted feathers, hammered sequins and hand beading. Some had metal shoulder pieces and breastplates, with metal splays on tiaras and belts echoing divine sun rays. Those elements nodded to Bernini’s sculpture The Ecstasy of Saint Teresa, “that’s so imperfect,” noted Mulleavy, “but so perfect because he was able to make fabric look better than fabric looks.”

The designers are well versed in Florence’s artistic legacy (Kate was an art history major at the University of California, Berkeley), but their Italian grandmother, who was an opera singer in Los Angeles and made all her own costumes, also seems to have been in their thoughts. When she first emigrated to America from Rome, she entertained tables at her uncle’s Italian restaurant in New York by singing the Italian national anthem, Laura Mulleavy recounted.

The sisters, who at Pitti W also feted the release of their new collaborative tome titled “Rodarte: Photographs by Catherine Opie and Alec Soth,” have gifted the gowns to the Los Angeles County Museum of Art.