The latest project by designers Laura and Kate Mulleavy is a wide-reaching collaboration with Opening Ceremony. 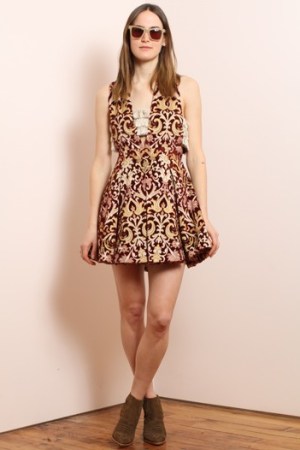 Mulleavy Madness is about to erupt in full, and I’m not talking tutus. At 11 o’clock this morning, when the doors of Opening Ceremony are unlocked, eager followers of Rodarte and its designers Laura and Kate Mulleavy will get to pounce on their latest project, a wide-reaching collaboration with the ultracool retailer.

For the much-anticipated collection, the Mulleavy sisters have developed a lineup that derives from their exquisitely artful Rodarte-ness as clearly as it is distinct from it; Rodarte for Opening Ceremony is more whimsical and temperate of design, while less aggressive, dark and fantastical, though with a subtle elegiac quality to the faded floral prints and controlled bohemian mood. It is unmistakably the work of the two sisters who emerged six years ago from West Coast anonymity to a particular fashion stardom that plays to a fan base with mainstream and cult factions.

The photos here are exclusive, the first look at the collection that Opening Ceremony principals Carol Lim and Humberto Leon will launch worldwide at 40 stores with whom they do business. (Opening Ceremony wholesales its own collection and represents other fashion lines as well.) In addition to Opening Ceremony in New York, Los Angeles and Tokyo, those carrying the collection include all Barneys New York doors, Holt Renfrew, Podium in Moscow and DNA in Saudi Arabia.

This collaboration will likely throw legions of young (and not so) women into fever pitch. And perhaps men as well, marking as it does the Mulleavys’ first foray into a full men’s range, though they did some sweaters for Opening Ceremony last year. Certainly it should be of interest to any potential suitors of an investing sort, whether from LVMH or elsewhere, who may be curious about the sisters’ ability to design clothes more commercial than those they put on their runways. Here they have an impressive Exhibit A. The collection retails from $250 for a top to $2,200 for a lace-up leather jacket, with accessories starting slightly lower; men’s, from $250 to $750. Most production is in New York; the knits and some accessories are manufactured in Japan and Hong Kong.

Under any circumstances such a project by these dual high priestesses of American Artful Chic would likely be pounced upon by the fashion hungry, but this is a particularly high-profile moment for the pair. The media frenzy surrounding their remarkable ballet costumes for “Black Swan” has been prolonged by the recent disparaging comments by the film’s costume designer Amy Westcott on Clothesonfilm.com, comments the sisters will not discuss. More positively, they are now preparing not only for their fall collection, but for “Rodarte: States of Matter,” an exhibition of their work at the Museum of Contemporary Art set to open on March 4.

For the collection’s inspiration, the designers looked close to home. “We were kind of thinking about dusty landscapes — it could be here in California, it could be in any of those places that you imagine on a road trip,” says Laura Mulleavy, on this day the lone sister spokeswoman, as Kate’s cold kept her coughing too much to come to the phone. “I think that’s pretty much a universal look within the U.S.”

She knows whereof she speaks, as road trips were very much part of the family dynamic. Even today, when the sisters manage to get away from work, they typically hit the road. “We grew up that way, too,” she offers. “The first time that we went on an airplane, it was a really big deal in our family because most of the time we’d be traveling in the U.S. in RVs or [doing] different types of camping. We pretty much saw the whole country over the years through driving. That just seems like a really important thing to us.”

An air of nostalgia comes across in the clothes that work the Rodarte fusion of out-there prettiness with cool. Though less out-there than befits their price and market, the lineup features distinctive house markings — intriguing fabrics, here ranging from thick, ruglike jacquards to those gentle shirtings; intense knits; off-beat leathers. These show up in dresses and separates, most flush with intricacies of design, the looks finished off with a litany of extras — fedoras; ribbed tights that unbutton into legwarmers; handbags made of belts; fabric-framed sunglasses, and an array of shoes.

While the Mulleavys took their singular design approach to this collection — “you sit and you sketch, and then you talk about it, and then things get developed” — working at a lower price level afforded certain freedom. “One huge difference was being able to do things in different colors and having different options and seeing them along in the process,” Mulleavy notes. “We don’t design that way for the collection of our own. We’re really precise like, ‘this has to be this color,’ and if it’s not working out, right at the beginning, we switch it pretty quickly.”

Among the most exciting aspects: designing a full men’s collection, which the designers found particularly challenging. “It’s a lot more limiting,” Mulleavy explains. “It’s harder to make a jacket really beautifully done for men when you have so much freedom when you’re doing one for a woman. I feel like there’s a different set of rules somehow. Even if you could break them, they’re still there.”

For their part, Leon and Lim knew the Mulleavys would bring something exceptional to the project. “One of the things that’s so special about them is definitely the artisanal quality to their clothing,” Leon says. “As American designers, they stand out in this one particular beautiful way. They’re definitely [making] a mark.”

This collaboration results from a professional relationship that started out personal; The friendship among the Mulleavys, Leon and Lim dates back to their Berkeley days. Even then they talked vaguely about future joint projects and knew they’d work together well. “We approach things in a similar way,” says Lim. “If we like something, we obsess over it. We search it. We [all] have that similar kind of obsessive quality, where we just like to get down to it. We can talk about a movie or particular food or anything — it’s not just a light conversation; it tells us a lot of things.”

Asked whether there were front-end discussions about commercial viability to the designs, Leon offers a quick “no,” that with all their collaborations, he and Lim prefer the designers start with a blank canvas, and let them “dream up” the perfect lineup. At the same time, he and Lim “come from a very business perspective. We don’t do things out of vanity.” They expect from Rodarte for Opening Ceremony a runaway success.

The designers, meanwhile, view the store as “representational of a new generation of people and shopping.” Mulleavy said the project afforded her and Kate the chance to address a different consumer. “That’s really exciting for us because our minds don’t just stop at creating when we do a runway show. It’s kind of freeing to do something that — maybe you’ve been thinking in your head but never actualized.”

The two sets of partners have already agreed on a second season for this collection. Whether the experience whets the designers’ appetites for something more permanent, perhaps a secondary line, remains to be seen. “The goal,” Mulleavy says, “is to do a lot more. I don’t know if it would ever lead to doing secondary work or a broader collection. I think that over time, we can fuse it all together. But definitely, we enjoyed doing it. It was fun for us.”

As it will no doubt be for those storming the stores today.