Roger Farah on His Time at Ralph Lauren and His Future

Ralph Lauren Corp. said Friday that the executive vice chairman will retire at the end of this month. 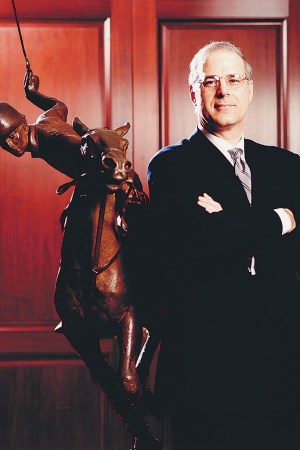 That was how the 61-year-old Roger Farah described his decision to retire from Ralph Lauren Corp., stepping down from his position as vice chairman after 14 years at the company. The fashion group revealed Farah’s decision Friday as it reported a 20.5 percent increase in fourth-quarter profits on a 13.6 percent rise in revenues.

Farah’s decision to exit Lauren is likely to immediately put his name at the top of every headhunter’s list in the industry as firms from J.C. Penney Co. Inc. to Target Inc. seek new chief executive officers. Farah has long been considered one of the leading executives in the fashion world, with his name mentioned in almost every major search over the last decade.

Farah told WWD in an exclusive interview that he would entertain other positions and had no non-compete clause. “I will take the summer off. My wife and I will enjoy the summer and do some travel. But mostly we’ll stay at home. We have a beautiful home which I haven’t seen that much of,” he said.

He said he decided to retire from Ralph Lauren without a plan in mind of what he would do next. “I’m going to see,” said Farah.

Told that his name has popped up on the short list of many executive searches over the past several years, he said, “That’s very flattering. I’ll see what’s around. I could do something tomorrow,” adding, “Given that my role had changed, and this stage of my life, I had earned the right to make that decision.”

Farah had been winding down his role at Lauren since being named vice chairman in September when Jackwyn Nemerov succeeded him as president and chief operating officer. In his new role, he was required under his contract to work only two-and-a-half days a week at Lauren for a base salary of no less than $450,000.

During his time at Lauren, Farah is credited with helping to transform the group formerly known as Polo Ralph Lauren into a global powerhouse, and for putting platforms and structures in place for long-term operational efficiency.

Not one to hog the limelight, Farah has always been quick to give chairman and ceo Ralph Lauren credit for setting the vision of the firm, as well as give colleagues a note of thanks for their efforts in helping him with the execution of many corporate initiatives over the years.

Calling Farah a “spectacular leader, trusted adviser and friend,” Ralph Lauren said, “During his tenure, Roger helped us assume direct control of our most strategically important regions and merchandise categories, evolving our company into a highly profitable, global business. He’s cultivated an impressive team of leaders who are ready to build on the strong foundation he has established. I wish Roger and his family all the best.”

Reached for comment Saturday about his decision to exit the company, Farah said, “I had an extraordinary 14 years. To me it was ‘Camelot.’ I’m very proud of the company and what we accomplished.” He said sales went from $1 billion to $7.5 billion and the market capitalization went from $1 billion and got as high as $18 billion and is $15 billion today. He said “that’s extraordinary. Those are great statistical accomplishments. The shareholders won big over that time period.”

But what Farah is most proud of is the people, adding that he built “an extraordinary team.” He said the quality of the company and the ability to grow globally were two of his accomplishments. “We have great brands that are in great shape and the balance sheet is pristine.”

Looking at the fashion landscape, Farah said, “The industry has changed and our company has changed. Most brands look at global opportunities. Fourteen years ago, we had mostly a domestic focus. E-commerce has changed the way people get information. Specialty retail has continued to grow in its importance.”

During his tenure, the Internet bubble burst, there was 9/11 and the severe recession of 2008. “We were blessed to have an extraordinary team of people and executed extraordinarily well in both good times and bad,” said Farah.

Asked what he will miss most, Farah said, “The people. I’m hopeful we’ll stay in touch. I’ll miss the daily interaction with this talented group of people who are like rocket fuel.”

When he first joined the company, people thought Lauren couldn’t do women’s ready-to-wear or children’s wear, and that the firm was mainly a men’s company. Now, he said, “Fortune magazine has coined Ralph Lauren the number-one company in the industry.”

Farah joined the company in April 2000 as president and chief operating officer until November 2013, when he became executive vice chairman. Before joining the company, he was chairman of Venator Group from December 1994 until April 2000, and was its ceo from December 1994 through August 1999. He has also held senior executive positions at Federated Merchandising Services, where he was chairman and ceo, and at R.H. Macy & Co., where he was president and chief operating officer.

Discussing what he thinks his legacy might be at Lauren, he said, “Hopefully every company I’ve been with is in better shape when I leave than when I started. The American luxury brand is the future. It’s not about one person or a group of people but the way people view a brand.

“My legacy is more of a teacher than anything else. I learned a lot, too. It cuts both ways.,” he added.

Farah will remain on the Lauren board until his term expires on the day the company has its annual shareholders’ meeting in August.

The company said it expects consolidated net revenues for fiscal 2015 to rise by 6 to 8 percent. Operating margin for fiscal 2015 is projected at between 75 and 125 basis points below the prior year’s level due to continued investment in the firm’s infrastructure and global retail store development, the company said. Capital expenditures are expected at between $400 million and $500 million for the year.

For the first quarter, consolidated net revenues are expected to increase by 3 to 5 percent. Operating margins are expected to be down 300 to 350 basis points from a year ago, due to investment in strategic objectives.

The decline in margins helped push shares of Ralph Lauren down by 2.1 percent to $148.81 in trading Friday on the Big Board.

In an interview, Nemerov said the company is testing slight tweaks to the Polo product line to cater to different markets and regional nuances. This past year, it built an exclusive assortment just for the Chinese New Year that she said produced “excellent results.”

The company is also taking back its men’s clothing license and will be expanding the line of Polo Tailored Clothing in the fall.

The women’s Polo line will become available in September with the opening of the Polo flagship on New York’s Madison Avenue after Labor Day. The women’s offering will include a “small selection of footwear and handbags, primarily to augment and [help] present the apparel products. We are developing a Polo accessories business and are in the midst of the planning stages,” she said.

Nemerov also said the American Living line, which had been an exclusive at J.C. Penney before the retailer discontinued it in spring 2012, became available for women’s sportswear and dresses at Macy’s earlier this month, with price points slightly higher than when the line was offered at Penney’s. “Right now we’re in test mode. Because of the early success, we will follow up [with a program] for the holiday selling period,” she said. She said the company and Macy’s are in “talks about the line’s future growth.”

The company’s chief financial officer, Christopher H. Peterson, told WWD that the biggest opportunity overseas is in Asia and Europe. He added, “We are going to expand a little bit in South America, looking at a couple of stores and a partnership in Brazil to expand our business throughout the region through the wholesale channel there.” He said the freestanding stores in Asia and Europe provide a “higher potential for return for us at this point in time.”

In addition, the company made some shifts to its organizational structure to realign departments and responsibilities to support its globalization push and also to reduce duplication of efforts from its taking back of overseas licenses.

Some highlights of Roger Farah’s tenure at Ralph Lauren Corp.

2006: Acquisition of Polo Jeans business for men’s and women’s casual apparel and sportswear in the U.S.

2009: Company said it will take over its Southeast Asia wholesale and retail distribution on Jan. 1, 2010.