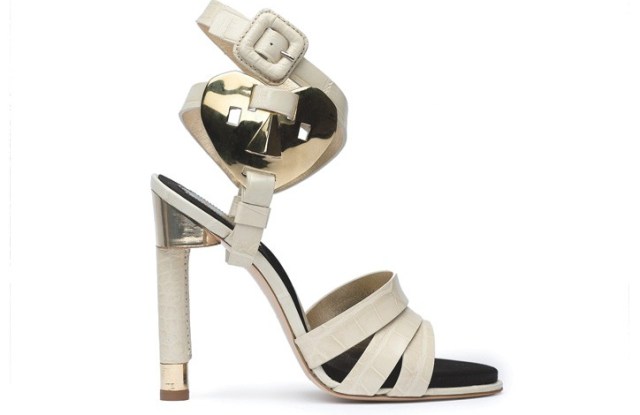 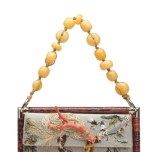 Always one to let his imagination roam, Roger Vivier’s creative director, Bruno Frisoni, based his spring couture collection on the idea of a woman about to embrace the emerging modernism at the turn of the 20th century. If she still has one foot in the past, Frisoni offers a boudoir-flavored pink silk clutch or a feathered Harem mule with black cording, inspired by North African caftans. Evoking the ornate facade of an ancient Chinese cabinet, a stunning version of the Carla bag, Dragon Barbare, comes embroidered with coral, tortoiseshell branch motifs, flowers and dragon’s-breath swirls of gold thread, and has a handle of vintage amber beads. Drawing inspiration from 20th-century designers, such as Jacques Adnet, Eileen Gray and Jean-Michel Frank, Frisoni proposes a classic Art Deco-style black crocodile clutch framed in gold, a new tubular heel and, taking a Surrealist turn, a pair of white feathered unicorn heels with spiraling horns rising from their toes.