With little fanfare — and much focus — Roksanda Ilincic is building a stand-alone luxury brand. 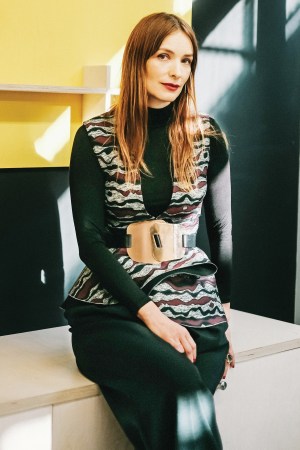 Much as she tried to tear herself from fashion’s force and talk herself out of becoming a designer, Roksanda Ilincic never succeeded. Neither common sense nor the implosion of her native Yugoslavia could stand in the way of the woman who would, when she was young, customize her school uniforms, and whose vintage Saint Laurent collection now stretches into the hundreds.

“I tried to study architecture, to choose a profession that was considered more secure or serious, but I just simply couldn’t get away from fashion,” said Ilincic, who is best known for her bold colorblocking in palettes ranging from the jewel-toned to the citrusy, and sculpted silhouettes with a formal edge and an old-world charm.

The decade-long Yugoslav wars of the Nineties also helped the Serbian designer, who studied architecture and applied arts at college in Belgrade, to realize her calling. While she admitted that she never saw the worst of the war, “it’s certainly something that puts things into perspective, and makes you realize the real values in life. It was quite bizarre thinking about fashion in the middle of that, but I guess it proves that if you want to stick with this fashion life, you have to be so passionate.”

Ilincic, who’s quick to smile, and exudes warmth, said clothes were always “a way to say what you like, who you are, what you stand for. It was like a hobby that became work, and a passion that became a lifestyle.”

That lifestyle is rapidly becoming a real business, with the Roksanda label generating about 10 million pounds, or $14.3 million, in annual revenue and the company set to grow 45 percent this year thanks partly to new category launches.

In some ways, the momentum has only just begun: Ilincic, who moved to London in the late Nineties to study for her MA at Central Saint Martins under Professor Louise Wilson, laid the foundations of the business with luxury rtw, later adding swimwear and a children’s line called Blossom.

Over the past 12 months — thanks partly to a hands-on private investor, Eiesha Bharti Pasricha, who took a minority stake in 2014, and a new chief executive officer, Carmela Acampora — Ilincic launched full handbag and jewelry lines, both produced in-house. In September, Roksanda will unveil eyewear with high-end British brand Cutler and Gross.

It was high time to expand: Roksanda has been a growth story for retailers since the designer began showing her collection during London Fashion Week in 2005. Browns and Harvey Nichols were among the first to buy it.

“We’ve had huge success with the collection,” said Anita Barr, group fashion buying director at Harvey Nichols, noting it has been notching annual double-digit growth. “The Margot dress with the bell sleeves remains a bestseller.”

Judd Crane, director of women’s wear and accessories at Selfridges, called the designs “distinct and challenging, never diluted, yet intrinsically wearable and flattering. The aesthetic fuses femininity and more avant-garde sensibilities.” Spring, he said, is up 50 percent year-on-year, and in June the store will launch the new bags and accessories.

Suzanne Timmins, senior vice president in the fashion office at Hudson’s Bay, said she’s watched Ilincic’s “skills mature and her designs become even more precise. She has translated her aesthetic codes over time to work for a wider variety of customers.”

While Ilincic is part of a talented gang — like Kane, Jonathan Saunders and Kim Jones — who studied under the late, legendary Wilson at Saint Martins, she’s taken a different route from her peers: She’s only ever worked for herself — barring a few post-grad freelance gigs — and hasn’t collaborated with any big brands or conglomerates.

(At press time, Ilincic’s name surfaced in connection to the suddenly notorious “Panama Papers” documents unearthing offshore holdings by an international array of political leaders, celebrities and others. According to The Guardian newspaper, the designer is linked to the Panama Papers because of shares she holds in an offshore account in a British Virgin Islands company, Greenland Property. A spokeswoman for her company told WWD that Ilincic does not avoid tax or obscure ownership of her assets; she is taxed in the U.K. on her worldwide income, and Greenland is a dormant firm with no assets. The Panama Papers are a trove of confidential documents providing information about offshore companies listed by the corporate service provider Mossack Fonseca in Panama that were sent anonymously to the International Consortium of Investigative Journalists.)

Until she teamed with Pasricha, Ilincic ran the business with her husband, footwear entrepreneur Philip Bueno de Mesquita, with whom she has a young daughter.

“I was very keen to take on the risk of nurturing a young, British designer in particular, and Roksanda attracted me right from the get-go,” said the London-based Indian businesswoman, who is also a patron of the British Fashion Council. “It was very important to me that I had a connection with the product, and I had a lot of respect for her as a person. She is a very grounded individual, a mother, a wife. She’s got her head on her shoulders. It’s no secret this business is very capital-intensive and it can get stressful at times, but this is a long-term game. I haven’t invested in Roksanda with a vision for a three-to-five-year private equity exit. I’m looking to create an asset here; I’m in it for the long haul.”

The first bag collection features nine styles and 21 stockkeeping units, for day and evening. They’re made from delicately embossed French calf’s leather and velvet, while one is in crocodile. Ilincic said she wanted the bags, when viewed together, to resemble a “puzzle of color.” (She finds Legos’ primary colors and shapes endlessly intriguing.) The palette includes dark eggplant, vintage pink, lilac, blue, tobacco and black. Prices range from 225 pounds, or $322, for a small purse, to 6,900 pounds, or $9,877, for the crocodile one.

The firm sees bags as a major growth opportunity, with sales projected to generate about 10 percent of revenue growth in the first year, and 20 to 30 percent in the long term. “Let’s be clear, Céline doesn’t make money in ready-to-wear, but in bags. I think leather goods is a category that you have to invest in,” said Pasricha.

Acampora said tailoring, day, occasion, evening and outerwear are also areas for growth, with potential expansion in the Middle East, Europe, Asia and the U.S. Roksanda has “brave targets ahead,” but she’s confident about meeting  them.

To broaden the customer base, they’ve brought in dresses at around 795 pounds, or $1,100, separates like knits and trousers, and the accessories. Ilincic said she’s thinking in terms of a 24/7 wardrobe, even stretching to demi-couture.

To wit, her pre-fall line included 20 limited-edition, numbered and signed pieces, lighter-than-air organza gowns with full skirts adorned with tiny fabric bubbles. Even the daywear had a dream-like quality, as in lilac flower embroidery for a pink mohair coat; curving, wavelike hemlines, or fine leather worked into color-blocked dresses.

Among the designer’s creative touchstones is Yves Saint Laurent, in particular his 1976 Russian collection. Ilincic said the brand makes her think of her mother: “She was a big fan, and she used to travel to Paris and buy some of his pieces. At the time I was a little girl and didn’t know who Yves Saint Laurent was, but there is this emotional connection that always reminds me of that period in my life.”

While her collections may be modern, the past still plays a big role. She returns regularly to a mid-century modern aesthetic — Kandinsky and Malevich are favorite artists. She’s also been experimenting with design. This week in Milan, she’s unveiling a one-off venture with Swiss ceramics firm Linck Keramik at the annual Wallpaper Handmade exhibition. Using special colored decals, Ilincic transferred her bright colorblocking to hand-thrown ceramic forms created by Margrit Linck from the Forties to the Sixties.

Surely a departure from fashion, but only temporarily.