The bags are colorful and architectural, just like the designer’s rtw. 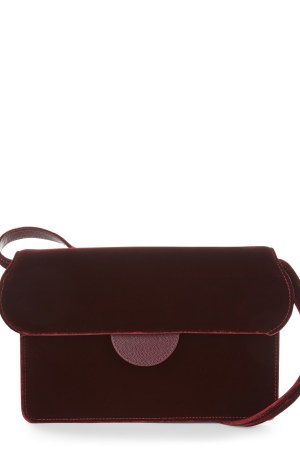 LONDON — Roksanda Ilincic is cooking up a new category — handbags — and some of the designs will appear on her fall runway Monday during London Fashion Week.

The designer described her bags as “unique, timeless and connected” to her ready-to-wear collection, which is known for its contrast colorblocking, architectural angles and geometric shapes.

Ilincic said she has great ambitions for the line and has designed it as a stand-alone collection, although it is meant to complement her rtw offer and will be sold alongside it.

“Bags are very important and so exciting for us. It’s a completely new category and we’ve started from scratch,” said the designer, adding that bags will be her biggest product division after women’s wear.

There are nine styles and 21 stockkeeping units including day and evening bags. A few styles are unisex, including one boxy shopper that comes with velvet or leather handles.

She described the hardware as “discreet and sometimes invisible,” and said much of it is covered in leather, while closures feature flaps and folds. There are shoulder-strap bags, too, and pouches and clutches. One of the small circular wallets can be worn as a cross-body bag.

Ilincic said she wanted the bags, when viewed together, to resemble a “puzzle of color.” The season’s palette features a dark eggplant, vintage pink, lilac, blue, tobacco and black.

Almost all the styles have a signature round pocket at the back, which can hold an iPhone and which Ilincic said offered her a “perfect opportunity for colorblocking.”

The collection is made from delicately embossed French calf leather and velvet, while one evening bag style — the most expensive in the collection — has been done in crocodile with a contrast velvet lining.

All the bags are made in Florence, Italy, and the first collection will be stamped as a limited edition.

Ilincic said she had long wanted to launch handbags but she wanted to get her stand-alone store, on Mount Street in Mayfair, up and running first.

In terms of her own handbag style, Ilincic has long favored vintage Hermès and “bags with not too much hardware,” as well as timeless crocodile bags.

Carmela Acampora, chief executive officer of Roksanda, said it was the right moment to invest in the project and that the company sees bags as a major opportunity for growth. Although she declined to give specifics, Acampora said the handbag category is projected to generate about 10 percent of the brand’s revenue in the first year, and 20 percent to 30 percent in the long-term.

All figures have been converted from pounds at current exchange.

The plan is to build out the handbag category, adding new products to the different families. The bags will be sold at wholesale and at the designer’s Mount Street store.

Acampora added that while bags are a major focus, there is opportunity for further expansion, especially in categories such as tailoring, day, occasion, evening and outerwear.

The company is set to grow 45 percent in the next year, and a pop-up shop at Selfridges is planned for July, following one that is currently running at Harrods. Geographic expansion is also on the cards, with opportunities in the Middle East, Europe, Asia and the U.S., Acampora said.

Asked about whether another store was in the pipeline, Acampora said 2016 would be about consolidating the handbag collection and that the next big launch would be the brand’s e-commerce site.

“We have brave targets ahead, and we’re confident we’ll be able to meet them as we have been doing,” she said.