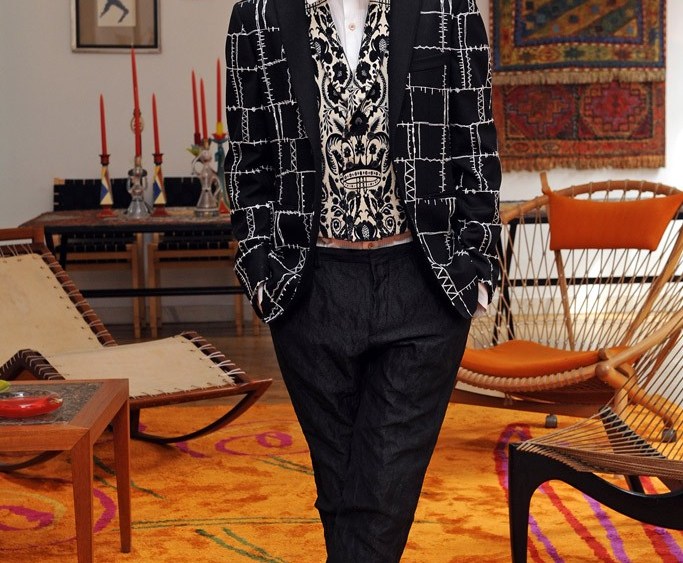 MILAN — Romeo Gigli is making a comeback in a collaboration with influential retailer Joyce.

The men’s and women’s Joyce by Romeo Gigli collection for fall will be unveiled on Joyce’s online store on July 1. It will then be presented at the chain’s Hong Kong and Beijing venues on July 24, followed by Shanghai and Venice, where Joyce will open its first pop-up store in the Italian city at the end of August. Gigli is expected to make personal appearances, and special window installations, combining the new line and archival pieces, will highlight the project.

In an exclusive preview, the intellectual designer, one of the hottest names around in the Eighties, showed an enduring fascination with fashion, unfazed by his ongoing legal battles with different previous owners and his short-lived collections with complicated names, such as Io Ipse Idem and XII XII XLIX par Romeo Gigli.

The designer, still sporting a Peter Pan-like frame clad in one of his form-hugging looks and reveling in the project with Joyce, shunned nostalgia and dismissed any thought of drawing inspiration from his past. “I look ahead and behind me, but I live my own times, my daily life, marked by the engagements with my wife and my daughter,” said Gigli, while styling the looks on the models in his Milanese apartment, filled with rugs and tables he designed himself; countless books, and a colorful and assorted range of furniture, including a Moroccan cabinet, a Franco Albini chaise longue from the Fifties, and a Hans J. Wegner chair from the Forties. Gigli explained that he readily agreed to work with Joyce, “one of his first clients in the Eighties,” indulging in “the pleasure” of designing, with “the same attention” as in the past.

To that end, the clothes illustrate Gigli’s way with delivering chic infused with a sense of controlled exotica. He defined the collection as “timeless and season-less,” as his wish “has always been for designs to last for a long time.” The items can stand independently, but also can be combined easily. “I cannot imagine seeing a woman wearing my clothes the same way I put them on the runway,” said Gigli.

The collection features 35 women’s and 20 men’s looks for fall, and the designer is already at work on the spring 2013 season.

Andrew Keith, president of Joyce, said the project fulfills a long-standing dream, since the company worked with Gigli for the launch of his very first collection. Keith defined Gigli as “an amazing creative force” and praised “his use of sumptuous fabrics and the finesse with which he layers the different textures of fine silks, velvets, brocades.” Many of these fabrics were developed exclusively for this collection, made even more special, he said, by Gigli’s unique “artist’s sensitivity to color.”

The executive said “there is a luxurious sensuality to Romeo’s work that combines a romantic fragility together with architectural and form-defining silhouettes that we believe is unique and is why he has remained such an influential and creative fashion force throughout his remarkable career.”

Asked why Joyce deemed this the best moment to work with Gigli again, Keith said the project is in response to requests from those customers who have known the designer over the years. “But I think what is exciting about this collection is that it sees Romeo’s signature evolving and he is speaking to a whole new generation of customers who will be experiencing his creative vision for the first time,” said Keith, adding that Joyce is expecting “very positive results” based on the “extremely complimentary and excited feedback” it has already received.

For fall, Gigli said he did not want an Asia-centric collection, but that he did wish to emphasize “the face of Asian women and their gestures.” He also took into consideration the region’s weather and opted for lightness of weight and textures, as seen on a purple, feather-light silk and mohair coat or on a beaver fur coat with a cape. Silhouettes are slim and elongated, often with asymmetric necklines; there are also ruched skirts and shirts embellished with rose buds or bubble sleeves, as well as one of his favorites, cocoon jackets. There are touches of color, such as orange and dark red, or blue-greens, as well as gold, for a sand and powder “palette that is not too light,” noted the designer, who is working with Italian factories to produce the collection.

Keith said Gigli “was always very clear that he wanted to design a collection that was inspired by the grace and beauty of Asian women. He shared wonderful stories with us about traveling in China in the early Eighties and about how inspirational he found it. But this collection is not a Chinese-referenced collection.” It is, he added, a collection for “strong, modern, confident yet graceful women who appreciate quality and luxury.”

The men’s collection includes fitted and extralong jackets and creased heavy cotton pants, reversible coats with silver fox-fur collars and comfortable tweed and flannel jackets. Colorful shirts come with high collars and bow ties. Fitted mohair pullovers are worn as vests, decorated with stripes and floral patterns. A men’s coat retails for between 14,500 and 48,900 Hong Kong dollars, or $1,868 and $6,302.

Born in 1949, Gigli launched his own brand in 1983, and, strongly passionate about architecture and travel, the designer infused his looks with architectural shapes combined with romantic, Renaissance touches, as well as punk street-style and ethnic looks. Gigli became influential, but his brand suffered through several changes of ownership, beginning with a bitter dispute in the early Nineties with former partners Carla Sozzani and Donato Maino. He was then left empty-handed after the brand’s ensuing parent company, the now-defunct IT Holding, sold the Gigli business in a complicated deal involving the separation of the company and the license for the brand, to the Luxembourg-based company Euroholding, Italian real estate company Immobiliare Esse and Mood Srl. It led to the designer being shouldered out of fashion in 2004, and producing the brand without his creative input. For fall 2009, Gigli launched the short-lived Io Ipse Idem line, which was shuttered after financial backers pulled the plug, followed in 2010 by the XII XII XLIX par Romeo Gigli (the numerals stand for his birth date of Dec. 12, 1949) in a partnership with Fuzzi, which was also a fleeting project.