The designer who pioneered modernity and austerity in the Eighties made a triumphant return to New York’s fashion week. 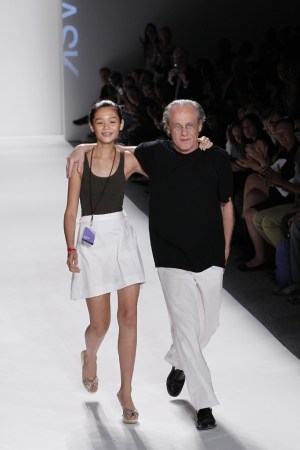 The designer who pioneered modernity and austerity in the Eighties made a triumphant return to New York’s fashion week. Once known as something of a fashion monk, Ronaldus Shamask reminded people just what they had been missing, with wearable clothes full of technical details that, in the hands of the designer, seemed effortless. The result? A standing ovation. WWD Collections caught up with the designer over some vegetable dumplings and steamed salmon after the shows were over to discuss his past, present and future.

Ronaldus, it was great to have you back on the runway. How did it feel for you?
Fabulous. It was so much fun. Normally, when you do a collection and you open the showroom, it doesn’t seem as complete as doing a fashion show. With a show, you have a deadline and everything has to come together at that moment. So it’s a completion of a process. It’s all very choreographed. It’s like the ballet. It’s design, merchandising, the ultimate look with the hair and makeup. That’s the moment.

Why the 10-year wait?
I was very focused on running a company, and my time was really spent on my clientele. I also felt that if you have a conversation, say at a dinner party, and you feel everything has been said and you don’t really have anything else to contribute, it’s better just to stay silent. It seemed a distraction at the time. It’s the difference between doing a Broadway production and doing a movie with worldwide distribution. This was like making a movie.

What’s different now from how it was then?
The media. Everything you do now is in cyberspace, and there is so much social media between Twitter, Facebook and all the Web sites that have an instant response to what you do. In a way, it’s very exciting, because the communication is there, but on the other hand, it’s very fast. The difference is in how good you are at understanding the media, at communicating and having a dialogue. At the same time, if you don’t have clothes, it becomes the emperor’s clothing. You can do the most fantastic show, but ultimately it must be something that people want to wear and feel they would like to buy.

Were there any surprises—pleasant or unpleasant?
The Mercedes-Benz venue made it so easy and smooth, it was effortless. They did an amazing job. The one thing that surprised me is that there were people doing shows at the same time as other designers.

What was your first thought after the last exit?
I was very touched by the welcome that I received. And then I was very nervous because I had planned on having my daughter, Arianne, come down the runway. That, for me, was a wonderful moment, to have her celebrate this with me and walk the runway. She seemed to be quite in control. I was so proud of her.

Did you learn anything new this season?
If you do a show and the end result is the printed word, it’s very different than when you do a show and all the images are immediately available around the world. That means you have to really see it through the eye of how the images work.

The collection was well-received. How did you react to that?
I couldn’t have been happier. These were people who have been so embracing and welcoming, and they have been very supportive of me. I am so grateful. One thing I have learned is that one cannot take anything for granted. I did the collection in five weeks. I shouldn’t say this, but I made a pact with myself that if it wasn’t above standard, I would abort the whole thing two weeks before the show. Two weeks before, I knew I had to show.

Would you have done anything differently?
I would have loved to have developed accessories and fabulous shoes, and the men’s wear…I added some at the last minute as a token, because I’d like to reintroduce men’s wear. Had I had the time, I might have rethought it, but I was quite happy how it went. I had my favorite song in the show. I don’t know how many people picked up on it, but it was “Sympathy for the Devil.” “Please allow me to introduce myself…I have been around since Jesus…Remember my name?” I thought it was making fun of myself.

Will we have to wait another 10 years for the next Shamask show?
No way. I can’t wait to do another show. I think I caught the bug. The show is an opportunity to create a form of perfection. Whether it works out or not, it’s an idealism. It’s about getting the right accessories, hair and makeup, and having a total point of view.