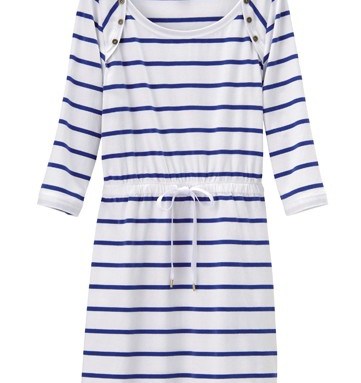 NEW YORK — Uniqlo’s Designers Invitation Project is back this spring with Charlotte Ronson, Vena Cava and Costello Tagliapietra among the nine collaborations.

The three New York designer firms have each created limited edition capsule collections of six pieces for Uniqlo’s chain of more than 850 stores worldwide, kicking off with Costello Tagliapietra on April 21, followed by Charlotte Ronson’s launch on May 5 and Vena Cava’s debut on May 12. Each piece retails for $29.99, and the lines will be available until May 21.

Ronson, who also designs the I [Heart] Ronson collection for J.C. Penney in addition to her own, namesake contemporary line, said Uniqlo was a natural fit.

“It made sense within the brand,” she said. “It’s worldwide — and through Asia, we already have a great business there.”

Ronson created six styles in two colorways and said she was keen to inject her signature aesthetic into the pieces, with striped jersey dresses and dresses with country floral prints.

“Since it’s hitting in spring, we focused on jersey and knits,” Ronson said. “I usually do a lot more wovens, so it was nice to work around lots of different jerseys. The feel was a seaside retreat, with coastal countryside as well as nautical influences and whimsical prints.”